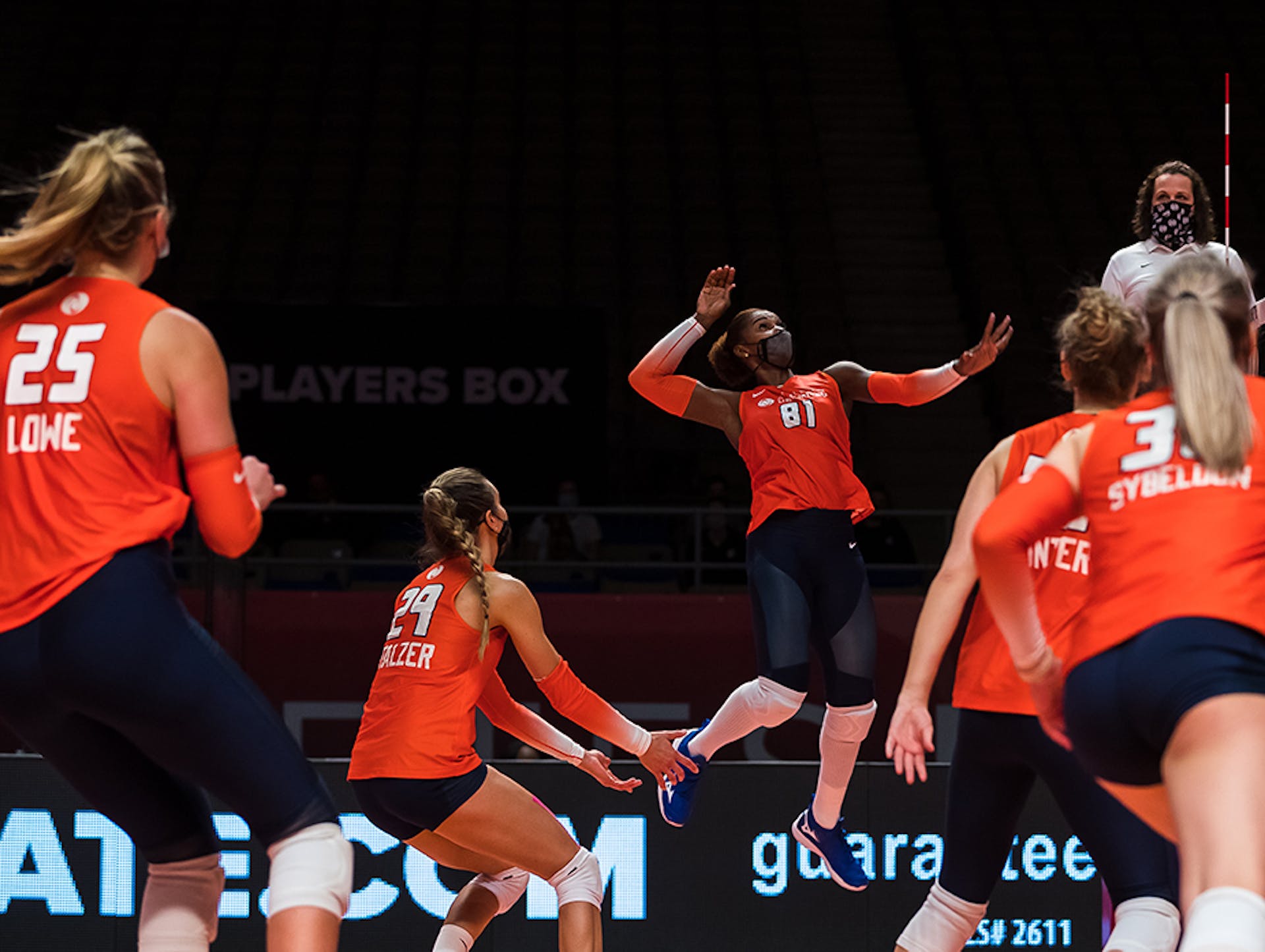 Team captain Bethania de la Cruz managed to draft three of her starters from the week before, with setter Kelly Hunter, libero Nomaris Vélez Agosto, and middle blocker Nia Grant being repeaters in her line-up. The draft strategy paid off as Team De la Cruz (Orange) obtained a clean sweep for the second match of Week 3, finishing 75-54 in the match and earning all 180 win points.

“We simply concentrated on what the team needed to do on our side of the court and we didn’t worry about what the other opponent was doing,” De la Cruz said. “Really, that was the strategy coming into today, just to get the job done.”

De la Cruz’s simple strategy fell into place as her team was firing on all cylinders. For the second match in a row, Hunter excelled at locating Grant, who finished the match with nine kills. De la Cruz’s established team chemistry allowed them to capitalize on Team Edmond’s slow start. The night before, Team Edmond (Blue) faced Team Larson (Gold) and drew out the first set to the longest game in Athletes Unlimited’s history, falling to Team Larson at 35-37.

With a less than 24 hour turnaround time for Team Edmond, exhaustion appeared to be a factor in today’s match as they lacked the level of defense and the level of energy they’d leveraged the night before.

With a slow start in the first set, they fell behind 12-19 as Team De la Cruz surged to a lead. Increased service pressure from Team Edmond allowed them to battle back to 17-20, but, despite the closer point differential, it wasn’t enough for them to win the set, losing 21-25.

In the first set for Team De la Cruz, opposite Karsta Lowe, outside hitter Lindsay Stalzer, and middle blocker Grant led the team in kills, with Lowe obtaining six and Stalzer and Grant having four. Throughout the set, Team De la Cruz’s good serve receive passing made them more in-system than Team Edmond, allowing for Hunter to evenly distribute her offense. Hunter also managed to earn two kills with left-handed setter dumps on extended scramble plays.

“Our ball control yesterday, as well as today, was phenomenal,” Hunter said. “That makes it really easy to run an offense, specifically a balanced offense.”

Lowe added another five kills to her total and De la Cruz added four. Team De la Cruz continued to serve receive well, letting Hunter to run her offense efficiently. With Team De la Cruz having multiple power hitters in the front row at once, along with their in-system passing, Team Edmond struggled to put up an effective block, only getting one block in the set. Team De la Cruz earned three, helping them to extend their overall point margin to 50-39.

The third set began similarly to the first two, with Team De la Cruz pulling ahead to an early lead at 8-3, forcing Team Edmond to use their first timeout. Team Edmond responded after the timeout with Edmond earning a kill on the outside pin.

However, the kill wasn’t enough for the team captain to rally her squad as Team De la Cruz finished the set 25-15.

De la Cruz added six kills in the last set, finishing with 13 in total for a .390 attack percentage. She had three aces and nine digs throughout the match to be voted MVP 1, earning 60 points to give her 387 in total.

Stalzer finished the match with seven kills, one ace, 10 digs, and three blocks, earning MVP 2 honors and the 40 points associated with the vote, finishing with 338 overall.

Hunter completed the set with 41 assists, three kills on five attempts, and two blocks to be voted MVP 3, earning her 20 points to finish at 331.