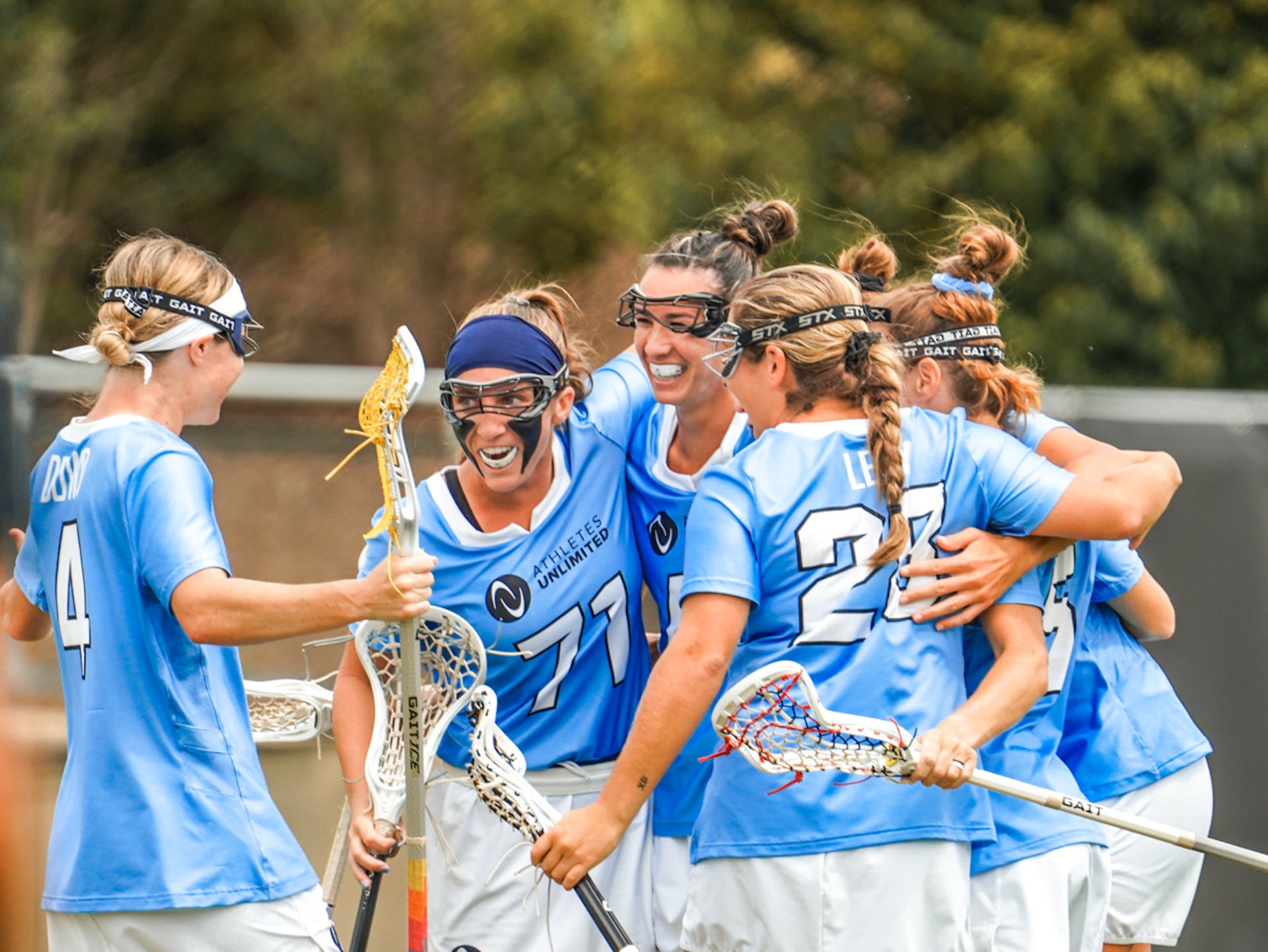 Here are the highlights from the Week 4 matchup between Team Cummings and Team Arsenault:

Less than a minute into the game, Izzy McMahon caused a turnover for Team Arsenault and found Kenzie Kent, who caught Caylee Waters way out of her cage and put the gold team up 1-0.

SCOOP AND SCORE for @unkentrolable‼️

Just seconds later, Emily Garrity Parros answered for Team Cummings by slicing and dicing through the defense to score.

With the shot clock winding down for Team Arsenault, Kent secured her second goal of the game off a Lindsey McKone pass to put her team up 2-1 over Team Cummings.

Once again, Team Cummings quickly had an answer for Kent. Taylor Cummings found Katrina Dowd sneaking behind the goal cage, who buried the ball past Britt Read to tie it.

DOWD on the DOORSTEP! 🚪

Cummings continued to be part of the action with a rocket of a goal off the draw, which was almost a 2-point goal but only counted for one because her foot was on the 8-meter line.

The run continued for Team Cummings as Nicole Levy found Kylie Ohlmiller cutting inside the 8-meter, who sent a snipe into the back of the net with a diving finish to put the blue team up 4-2.

Right off the draw, Team Cummings made it four unanswered goals with a perfectly executed fast break, culminating in a finish by Dowd to make it 5-2.

Team Arsenault finally put a stop to Team Cummings’ run when Amanda Johansen rifled a shot past Waters from behind the 8-meter for a 2-point goal, quickly bringing her team within one.

It was a high-scoring first quarter for both sides, as Team Cummings led Team Arsenault 5-4.

Less than a minute into the second quarter, Marie McCool hit Moly Garrett in the back with a shot, which resulted in a red card and McCool’s ejection from the game.

Quickly getting payback, Garrett found the back of the net for Team Arsenault to tie the game.

Right off the draw, Parros found the feed inside after a great passing sequence and buried it to give Team Cummings the lead once again.

Parros scored again for Team Cummings with just over two minutes left in the second quarter, securing the hat trick and putting her team up 7-5.

With under a minute left in the quarter, Ohlmiller found the net but it was called back because she fouled a defender on the follow through. This gave Team Arsenault a player-up advantage with time winding down, but they could not take advantage of that opportunity. The first half ended with Team Cummings up 7-5.

Less than 30 seconds into the second half, Olhmiller rolled around her defender and buried a shot past Read to give Team Cummings their biggest lead of the day. Immediately after, Levy rifled a 2-point shot from way outside the 8-meter line to put Team Cummings up 10-5.

.@Nicoleelevy14 has tied the league lead in 2⃣ point goals with this SHOT ⤵️#BeUnlimited pic.twitter.com/fTuUkFZY9Q

Team Arsenault tried to cut the defeceit, but Waters made a kneeling save to add on to another outstanding day in the cage.

.@seawaters7 has been DYNAMITE for Team @tcummings_21 today! 🔥

She has the @GEICO Defensive Play of the Game ⤵️#BeUnlimited pic.twitter.com/mlq1X72EUt

Ohlmiller scored again on Team Cummings’ next possession and notched the hat trick, giving her team a six-goal lead.

Kylie GOALmiller can’t miss! 🎯@kylieohlmiller snipes one low to high into the corner to cap off a hat trick! 🎩#BeUnlimited pic.twitter.com/4rXQ2vZUNc

With just under 10 seconds remaining in the third quarter, Parros scored her fourth goal of the day with a twizzler to put Team Cummings up 12-5.

The first three quarters were dominated by Team Cummings, with no shortage of stellar offensive plays to get fans excited.

Giving her team some hope early in the fourth quarter, Kent secured a hat trick of her own and cut Team Cummings’ lead to six. She ended a 14-minute goal drought for Team Arsenault, who desperately needed to find a way to score.

Shortly after, McKone received a pass from Kent and fired a rocket from outside the 8-meter for a 2-point goal to put Team Arsenault within four.

Team @_Demps isn’t going down without a fight 💪

Cummings refused to let her team lose their momentum, however; after Becca Block won the draw control, Cummings got the defender on her heels and put the ball behind Read.

Ohlmiller added on with her fourth goal of the game, putting Team Cummings up 14-8. Shortly after, she scored on a behind-the-back shot for her fifth goal on the day – something she has now achieved twice so far this season.

Kylie GOALmiller just out here living up to her nickname today.👀 @kylieohlmiller can’t be stopped! She’s leading her team with 5 goals. @AUProSports #BeUnlimited

That @kylieohlmiller BTB was too cold. Always in her bag

With under two minutes left in the game, Dowd secured the hat trick with a slick move inside and put Team Cummings up by eight.

Team Arsenault found some momentum late, with a strong fast break that resulted in Garrett’s second goal of the game. However, it was little too late for the team in gold; Team Arsenault won the game 16-9 in an offensive explosion.