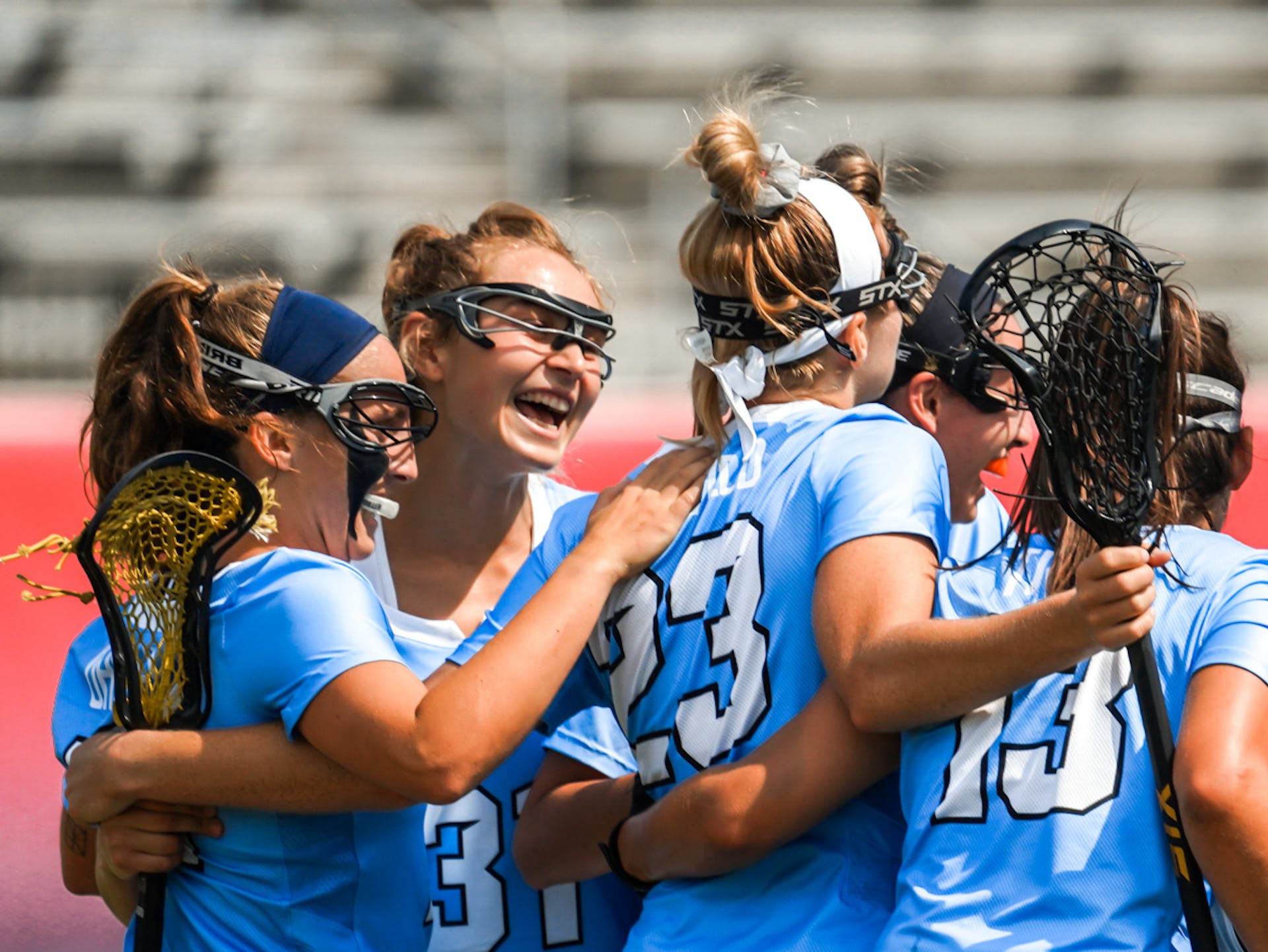 In the second game of the afternoon, Team Arsenault faced off against Team Treanor. The blue team sought a second win after their thrilling victory the night before.

For the first time so far in Athletes Unlimited Lacrosse, both defenses were able to stifle offensive pressure and keep the score low through the first half. The second half was a different story, though, with spectacular goals on each side that will undoubtedly make the highlight reels.

Team Arsenault’s second half offensive explosion led them to their second win of the weekend, besting Team Treanor 12-8.

Both offenses got off to a slow start to kick off the game, each turning the ball over multiple times and missing shots. Captain Kayla Treanor had an opportunity to score the first goal, but Caylee Waters read it well and made the save. The defenses on both sides put high pressure on attackers and made big plays.

With just over a minute left in the first quarter, Sydney Pirreca notched the first goal of the game off a great pass from Treanor to put her team up 1-0. That one goal was enough to win the quarter for Team Treanor.

.@sydpirreca with a GOAL to get us started after the longest stretch we have seen so far without a goal‼️

Waters and Britt Read continued their streak of locked-in defense early in the second quarter, each making excellent saves.

It amazes me how well these @AUProSports goalies are doing despite being peppered with shots 5-8 yards out on a regular basis.

The offenses on both teams began to heat up at the end of the second quarter. Captain Dempsey Arsenault finally got a point on the board for her team to tie it at one goal apiece, but a few minutes later Taylor Cummings found a lane and put the ball in the back of the net for her 11th goal of the season.

.@_Demps is doing it all for her team on both ends‼️#BeUnlimited pic.twitter.com/IJ1MhTDzRG

Caroline Wakefield quickly scored her first professional goal to tie it at 2-2, going coast-to-coast in an unbelievable run.

.@uncwlax grad Caroline Wakefield BULLDOZES all the way from the defensive end to record her FIRST professional GOAL‼️#BeUnlimited pic.twitter.com/D3bkDQDNhM

Despite Team Arsenault’s offense gaining steam, Team Treanor once again found a way to take back the lead with a Kelly McPartland rocket into the back of the net.

.@k_mcpartland RIPS one into the top corner from just inside the eight to put Team @kaylatreanor up 3-2 at the half!🧡#BeUnlimited pic.twitter.com/0WQBbOfm7T

Excellent goaltending and defensive pressure led to just a 3-2 score at halftime.

Waters kicked off the third quarter with an incredible save, using her quickness to read the shot.

Building off her dominant five goal game the night before, Kylie Ohlmiller found space to shoot the ball into the back of the net and tie up the game.

Shayna Pirreca, playing against Sydney for the first time ever, literally one-upped her sister with a two-point goal to put Team Arsenault up 5-3.

Mollie Stevens immediately put her team right back in it, however, catching the defense off guard and scoring her fifth goal of the season. Treanor quickly added on, finding the back of the net to tie the game up 5-5, and Cummings made it three unanswered goals with a movement around the crease for the score.

With just over a minute left in the third quarter, Arsenault stopped Team Treanor’s run with a bull dodge goal to tie it. Just seconds later, Team Arsenault’s fluid passing led to a diving, behind-the-back goal from Ohlmiller.

Meg Douty continued the streak of highlight-worthy goals with a spectacular quick stick shot, putting Team Arsenault up 8-6 with under 10 seconds left in the quarter. The blue team’s resilient effort gave them 40 quarter win points, half of which carried over from the previous frame.

Team @_Demps defenders = coast to coast GOALS‼️@MegDouty scores one to give Team Arsenault an 8-6 lead at the end of the 3rd quarter. #BeUnlimited pic.twitter.com/bVVU6F70O8

Just seconds into the fourth quarter, Treanor brought her team within one with a goal off the draw control.

Shayna Pirreca quickly answered with her second two-point goal of the game, putting Team Arsenault up 10-3. Marie McCool added onto their lead with a diving goal.

Team Treanor found themselves down by 4, but the team captain refused to give up hope. Treanor found space past Arsenault and made a great shot, cutting Team Arsenault’s lead to 3.

.@kaylatreanor STRETCHES and places one in the back of the net for her team!🔥 #BeUnlimited pic.twitter.com/RYZbXjMnr9

Sammy Jo Tracy added another goal to Team Arsenault’s lead in the final minute of regulation after a long replay review, making the score 12-8. Waters helped preserve that score for Team Arsenault with an unbelievable kick save.

Team Arsenault secured the 12-8 win over Team Treanor. They will face the other undefeated team, Team Wood, on Sunday.

Shayna Pirreca’s duo of two-point goals led her to 182 points and the MVP 1 spot. Meg Douty earned MVP 2 with 167 points, and the MVP 3 Caylee Waters followed just behind her at 166 points.