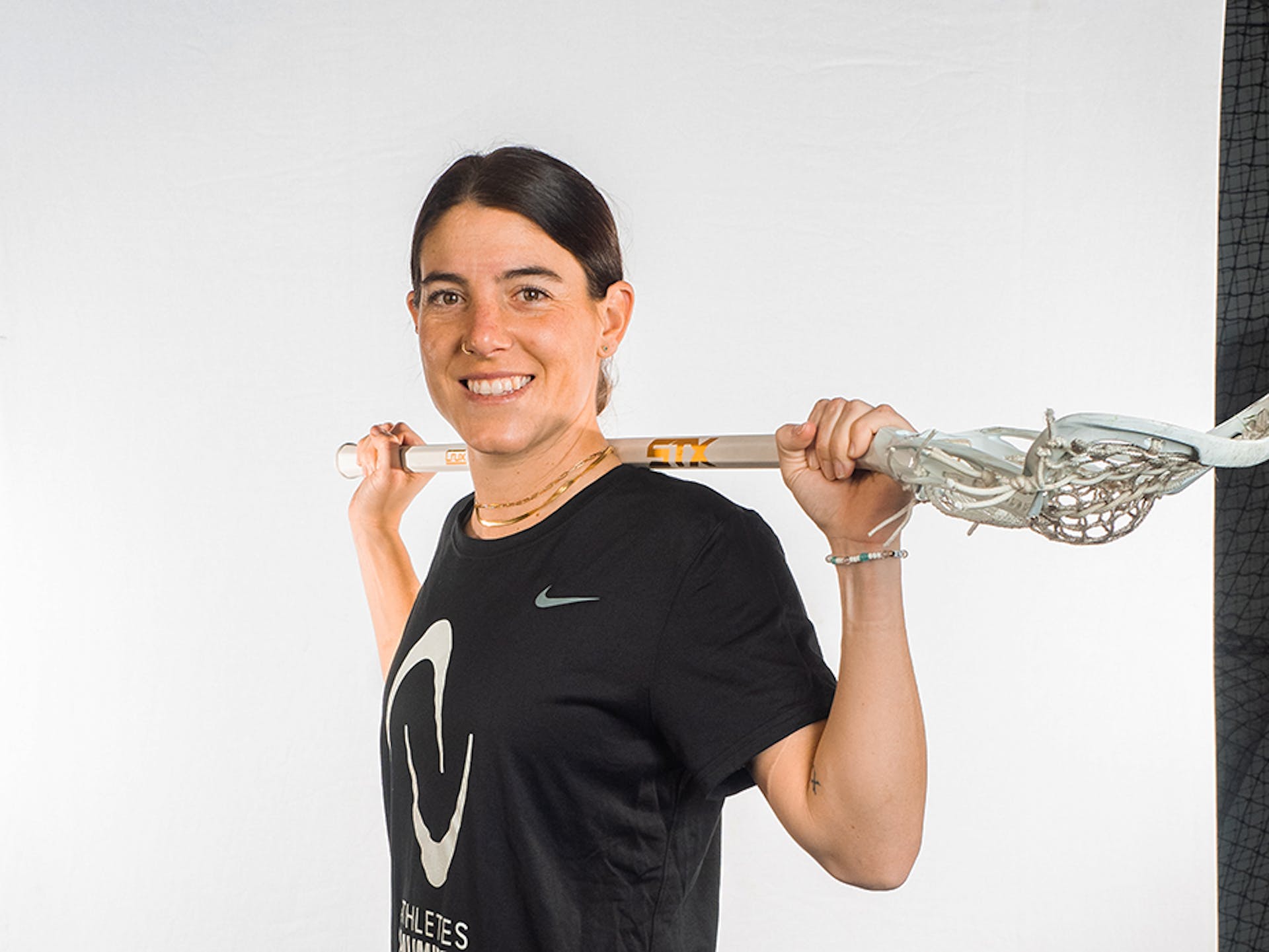 How my injury changed me

My senior year at Syracuse was back in 2013 and our team was unreal.

We had lost in the national championship game the season prior and now we were back stronger than before with a phenomenal freshman class that included Kayla Treanor. We were so tight, so focused, and just truly loved each other. One of the things I love about lacrosse — and just team sports in general — is how positive energy can get transferred over to how a team plays together. And no question, losing in the national championship left a huge chip on our shoulders.

On top of that, after making the squad in 2010, I’d been cut from the roster for the 2013 USA World Cup team, so that was another pretty decent-sized chip squarely on my other shoulder. For me, the plan was clear: We were going to win that national championship and I was going to earn a spot on the next World Cup roster. That was the goal.

And for the first 12 games of that season, everything looked on track.

Then, during that 13th game, in one split second, everything changed.

I was riding a defender, trying to get a back check and force a turnover. That was my game for basically as long as I’d been playing lacrosse: Ride, ride, ride and create opportunities for my team.

The girl I was defending had her stick out, so I went for a check and as soon as I planted my leg, I felt my knee buckle and then I heard a *pop*.

Even though I went down on the ground right away, I don’t recall feeling pain. Instead, I think it was closer to shock. This seemed bad. Really bad.

After I was helped off the field, I tried to keep a brave face, telling my teammates that I thought I was okay. I was even able to run still which gave me some hope that I actually was fine. But when the trainer tested out the knee ligament — it was just a simple tug back and forth — I knew based on their expression that my worst fears were true. My college career was over. I’d torn my ACL.

At that moment, it basically felt like I had the weight of the world on me and… I’d collapsed. A few minutes earlier, I was the captain of the best lacrosse team I’d ever been part of, and now I really didn’t know if I’d ever get to play the sport again.

I didn’t really discover lacrosse until I was 14,

It honestly started out really simple, just having a catch with my cousin in her backyard. The act of just throwing and catching the ball, using the stick as an extension of yourself, just clicked with me right away. Anyone who has ever played the sport probably understands that satisfying, connective feeling. I decided to go to a local camp for girls who wanted to play in high school and, well, my life was never the same. I’d played other sports before, but nothing compared to this.

I still remember being in my mom’s car after the camp ended and just going off about how much I loved lacrosse. The newspaper actually published a picture of me at the camp that we held onto.

I’ve always been super competitive, whether I’m playing for a championship or just shooting a rolled-up ball of paper into a trash can. To me, sports are really a form of expression — and lacrosse is the ultimate form of expression.

It’s a game that rewards strategy, but also imagination and creativity. The basic skills needed for lacrosse — how to pass, how to catch, how to shoot — can all be personalized in unique ways. My style of lacrosse is loud and fun because that’s who I am as a person. To me, there’s no freer feeling than running down the field and having almost unlimited possibilities at your disposal.

As soon as I experienced that feeling for the first time, I knew this was the sport I wanted to take up and run with as far as I possibly could. And as I would find out, taking up lacrosse did involve running. A lot. Because I was introduced to the sport later than most, I had a pretty big learning curve in order to get to the skill level I needed to be at to play in college. But honestly, it was easy to work really hard for lacrosse.

I didn’t just love the game but I also became really inspired by the women who played it.  Watching players like Katrina Dowd, Hannah Nielsen, Hillary Bowen and Jen Adams motivated me to keep working. They were the blueprint.  Before I was anywhere close to being on their level, I knew I wanted to be on their level.

Midway through high school, I really started improving and began getting interest from different colleges. The first time I actually visited Syracuse was during a snowstorm, which, you know, not ideal. But I met with Gary Gait, who had just gotten hired there, and it only took a few minutes of listening to him talk lacrosse before I was certain I needed to play for him. I didn’t care about the snow — that’s why there’s a dome.

I was going to Syracuse and we were going to win a national championship.

My trajectory in lacrosse — from picking up the sport late to earning a D-I scholarship, to being named a team captain and All-American — didn’t leave a lot of room for reflection. From the moment I picked up a stick, my mind was always focused on the next big goal.

But as soon as I tore my ACL, all of that changed even if I wouldn’t fully accept it at first.

My first instinct after I found out about my injury was that I wanted to be just like Hilary Bowen. There were plenty of reasons for that, but specifically, I remembered that while she was at Northwestern she’d played on a torn ACL and scored five goals in the national championship game. I sent her an email asking for guidance, and she responded with a really long and positive message with advice on what she did. The lacrosse community is just kind of great like that.

I decided to delay my surgery and trained like crazy to get in good enough shape to help my team make a run in the tournament. I was putting a lot of work in and making what I thought was decent progress, then one day while I was warming up and just shuffling my feet, I felt my knee slide out of place again. This time it felt ten times worse than the first time I’d injured it.

That’s when I accepted my college career was definitely over.

At that point, I had a decision to make. It would have been really easy to just sink into depression and feel bad for myself. In my private moments, of course, I was as down as you’d expect. But what I realized was that, even though I couldn’t control my injury, I could control my attitude.

Whenever I was around the team, I was myself: Loud and fun. During games, I became the biggest ‘Cuse lacrosse fan you could ever meet and just tried to lend positive energy to the team any way I could. I didn’t realize it at the time the joy I got from focusing solely on the team’s performance probably influenced my decision to eventually go into coaching as much as anything else.

While it killed me to have to watch from the sidelines, it was also amazing to witness my best friends rally together and play amazing lacrosse. We would end up winning the Big East conference and tournament titles, before finally losing a close game in the Final Four.

When the season was over, even though I was out of eligibility, I knew in my heart I wasn’t done with lacrosse.

The first time I started training after surgery, I felt like I had bricks in my feet.

I started coaching right after college, and on my free days, I did everything I could to try to get in playing shape so I could try out for the World Cup team again. I’ll be honest, based on my form at the time, it seemed like a major long shot.

That thing that made me love lacrosse — the effortless creativity and movement — was suddenly stunted. Without having the full confidence in my ability to plant and pivot when I needed to, the game felt really fast in a way it never had before. I didn’t feel comfortable playing my kind of aggressive, loud style. I didn’t feel like myself out there.

With the encouragement of friends, coaches, and especially my family, I kept working at it. The positive energy I gave to them while I couldn’t play, was showered back on me tenfold when I really needed it most.

By the time the tryout for the next World Cup team came around, I definitely still didn’t feel 100% like the player I used to be. I also knew that the same people picking this World Cup team had also cut me from the previous team when I had two good knees, so I definitely had my doubts about my chances. But instead of letting them control me, I used those doubts as a source of motivation. If I didn’t make the team, fine, but it wasn’t going to be because I didn’t play as hard as I ever have. That was what I could control.

During that tryout, I played my game and I had a lot of fun. Instead of being worried I wasn’t good enough, I just felt so happy and blessed to be playing and to feel that sense of freedom on the field again.

We were all in a room together when they announced the numbers of the girls who had made the team. Throughout my life, I’d been in this situation a ton of times, and until the last World Cup tryouts, I’d generally always heard my number called. I expected to hear my number called. This time, I had no expectations. I was just grateful to have made it back into the room and to have tried out at all.

And I think that’s why when my number was called, it felt unlike any other accomplishment I’d experienced in sports. I was pretty choked up.

It’s not ideal to tear your ACL. I wouldn’t recommend it. Zero stars.

But looking back on my career, a lot of my biggest triumphs only felt so good because I had the opportunity to quit and I didn't.
Michelle Tumolo,
Athletes Unlimited Lacrosse

But looking back on my career, a lot of my biggest triumphs — making that team, getting. drafted, helping develop amazing players — only felt so good because I had the opportunity to quit and I didn’t.

Before I got injured, I viewed a lot of my goals more as expectations rather than blessings. Getting injured forced me to view the game I love from a different perspective, and I think it ultimately made me a better player and especially a better coach. Big victories are great, but you don’t tend to learn a lot from them. It’s the struggles and the tough times that are really the moments when you get to learn the most about yourself.

That’s all to say that the most important moments in your life aren’t necessarily the best moments. But if you take the right lessons away and keep the right mindset, those difficult times can directly lead to the best times.