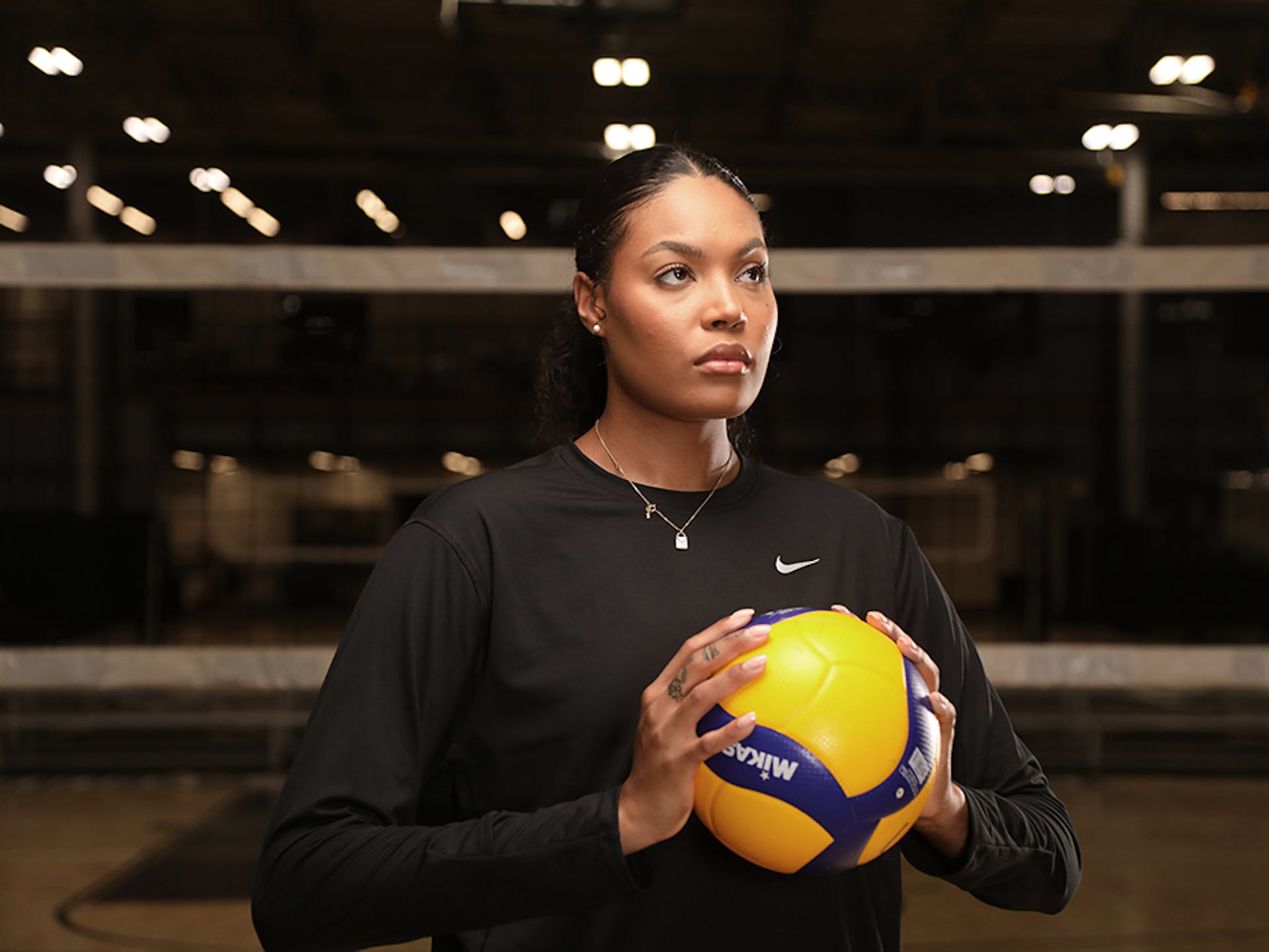 When Sherridan Atkinson decided to become a volleyball player at the start of her freshman year in high school, the path was strikingly uncomplicated.

“If I wanted to do something, I just did it,” she said.

With that plucky sense of self she sauntered into volleyball tryouts at her Southern California high school where she was named to the junior varsity team. Thus began a career in volleyball that would take her on scholarship to college at Purdue University and abroad to play professionally in Turkey before bringing her back stateside to compete in Athletes Unlimited.

It’s a life Atkinson, who came from a performing arts background, had never considered for herself. “I never thought of it as, ‘This isn’t really my lane,’” she said, instead thinking, “‘Why the heck not?’”

As she ascended through the stages of her career it became obvious to her how special such opportunities were. “I don’t come from a sports family. I had no idea what the heck was going on. All I knew was that I had a crush on Rajon Rondo from the Celtics. To go from that to being a full-time professional athlete… there’s no explanation,” Atkinson said.

Those who have gone before her are a crucial part of the process.

“When I was on stage at the end of my career getting the ESPY Icon Award, I had kind of an out of body experience,” said two-time Olympic gold medalist and Athletes Unlimited advisor Abby Wambach. “What was supposed to be the best night of my life ended up turning into the most controversial.”

Sandwiched between Kobe Bryant and Peyton Manning, who were also receiving the same award, Wambach realized though they had likely all invested equal amounts of dedication to become top competitors, Bryant and Manning were heading into retirement with far more financial security than her.

“Kobe and Peyton’s concern was where they were going to invest their millions of dollars. Rightfully so, but mine was how I was going to pay my mortgage,” Wambach said. It was then Wambach decided to invest her energy into creating more financial opportunities for other athletes. Pay equity is a central topic for female athletes today, the latest hurdle for athletes who have faced so many challenges just to compete.

A huge thank you to @espn and the honor of a lifetime!! A “special thanks” for the custom @brooksbrothers suit!! @thetiebar @anastasya_k

The road to women’s participation in sport hasn’t been straightforward. Since the founding of the first modern Olympic Games in 1896 women have been vying to get on the field of play. They succeeded in gaining the right to compete at the 1900 Paris Olympic Games in the sports of tennis, sailing, croquet, equestrian and golf. Women have been trying to compete in additional Olympic sports ever since, comprising 42.7% of athletes at the 2016 Rio Olympic Games.

Stateside, female athletes were helped by the introduction of Title IX, a federal civil rights law that prohibits discrimination on the basis of sex in any federally funded education program or activity. Passed in 1972, the law is credited with broadening the scope of female high school and college sports programs, keeping women involved in sport longer and giving them greater access to coaching, opportunities that have propelled many women forward into professional and Olympic careers.

As women’s participation in sport increased, the money followed — sort of. In 1973 the U.S. Open of tennis became the first grand slam to offer equal prize money to both men and women, a practice continued to this day. Yet, in tennis specifically, it wouldn’t be until the mid-2000s that other major tournaments followed suit with official pay parity. In other sports, women are still waiting.

Many consider pay equity the next pressing concern for female athletes and the logical extension of Title IX.

The pay gap varies by sport and country but in some pursuits, such as in soccer, studies show that female soccer players earn as little as one-hundredth the amount of their male counterparts. The federal lawsuit launched by the United States Women’s National Team — who galvanized Americans with their 2019 FIFA Women’s World Cup win — is one such example of attempts to secure pay equity for women.

Women have pushed for increased salaries in other sports concurrently. In the WNBA, the 2020 collective bargaining agreement achieved a 53% increase in total cash compensation for athletes.

“What we did this past CBA was certainly a catalyst for the change we want to see. I’m hoping that is first and foremost reflected in the salary and compensation,” said WNBA Players Association President Nneka Ogwumike during a panel for LA84.

The ratified agreement preceded a landmark year for the WNBA, which saw a 34% year-over-year increase in viewership of their final championship. “We found that across all networks there was 68% higher viewership of WNBA than any other season,” Ogwumike said. “It’s not rocket science. This was the most T.V. games we’ve ever had on T.V. So, if we’re on T.V., people will watch us. It’s really that simple.”

While women’s sports have previously languished in obscurity, giving them more attention boosts their economics — an example of the agenda-setting function of mass media. “Think about the way we consume men’s sports,” said journalist and Athletes Unlimited advisor Taylor Rooks, who covers the NBA for the Bleacher Report. “We’ll know the name of an NBA player that doesn’t play that much, just because we’re watching it so much.”

In other words, if female athletes can get more attention, their stories will start to become more important in the eyes of the public.

The mandates of Title IX don’t carry into the public space — media outlets don’t have to put women on T.V. Brands don’t have to sponsor female athletes. It might seem like we’re learning about male athletes by osmosis, because we can’t escape their stories, but brands and news outlets have no regulations forcing them to make a change.

Instead, this next step in the journey for women’s sports requires buy-in from fans. For people who think women’s sports are too boring or niche to deserve such attention, Rooks has a theory.

“The one thing I realized when people say that is they’ve never actually watched a game,” Rooks said. “They probably haven’t sat and watched a WNBA game. Or a softball game. Or women’s lacrosse. It’s coming from a deep rooted patriarchal attitude. Male is the default, and anything separate from that is niche. When it’s 50% of the population that’s women, it’s not niche.”

That’s the argument female hockey players are banking on as they pursue a similar path to the WNBA. While a matchup between the United States and Canadian women ice hockey teams might draw a large audience — 3.7 million viewers for NBC at the Pyeongchang Winter Games — the support rarely translates into sustained viewership or an increase in pay for female hockey players during non-Olympic years.

“I think the obvious point is we believe the NHL needs to be a part of the next big step in women’s hockey because of the infrastructure that exists in their clubs,” said Jayna Hefford, head of the Professional Women’s Hockey Player’s Association. “The expertise they have, the knowledge they have and the support they have to provide a strong foundation. We’ve had a number of leagues, models that have happened in women’s hockey but none of them have worked without that basic level of foundational resources.”

It is here that Athletes Unlimited sits in the crux of the history of women’s sport — building on progress from the decades prior while working to be part of a solution that increases pay for women and coverage of their athletic feats.

Doing such work is not just beneficial for society but stands to have a financial upside — female athletes have a unique ability to connect with female fans, an increasingly lucrative market.

Women working in other industries across the globe are getting wealthier. While there is still progress to be made to close the pay gap, women now control a third of the world’s wealth and are growing this wealth at a rate of $5 trillion a year — growth that is only expected to outpace the broader wealth market as it accelerates. Earning money — and lots of it — was once considered the province of men; soon it will also be also known as a woman’s game.

It’s taking time, but female fans of sport are beginning to find their footing. Certainly their origin story as fans began on rocky ground — married women were barred from watching the ancient Olympics. The death penalty was reserved for any offenders.

The tradition of severe punishments for women who watch sports continues even today in some parts of the world. In October 2019 Iran reversed a 40-year ban on women attending soccer matches following the death of an imprisoned female soccer fan in Tehran, who died after setting herself on fire upon hearing her probable punishment.

Women can legally watch sports now in most, if not all, countries, so in that sense they’ve made progress. But their treatment throughout modern history can sometimes make the ancient past seem not too distant.

“Why, in sports entertainment, are men and women being marketing to the exact same way? Why isn’t there more attention being given to what women want?” said Thayer Lavielle, executive vice president of talent marketing and operations at The Collective, a division of Wasserman.

“Athletes have a way to reach these fans,” Lavielle said. Female fans are looking for personalized connection points in sports and are less concerned with teams than they are with cheering for an individual athlete, especially ones with whom they feel affinity.

“Connecting and bringing that gap to the consumers will be key,” Lavielle said of what will need to be done to advance women’s sports. “Sports leagues, media companies and brands would be smart to rely on this first person connection athletes have with their fans.”

This is where athletes like Atkinson now find themselves — potentially perfectly suited to grab the mantle passed to them through generations of advocacy and progress in women’s sports, with a unique ability to connect with a new generation of fans, ones who are looking for athletes just like her.

While the pathway for her entry into professional sports might have been paved for her by the advocates who came before, she recognizes the next steps are her responsibility — for herself and future generations.

“The biggest thing is the respect and giving us a salary that shows you understand our worth,” she said. “When you look at any male sport, you hear these numbers that are astronomical.”

Opportunities like Athletes Unlimited could keep homegrown talent at home, which could be a boon to local sports programs, helping to improve the quality of competition throughout all levels of sport.

Atkinson still embodies the spirit of empowerment that got her this far. “There’s no such thing as a limit, go for it. As long as you’re being smart of what you do,” she said.

As she advances women’s sport by simply being herself and walking confidently into each season of her career, she’s optimistic about the possibilities that exist for female athletes.

“Everything is your own story that’s being written,” she said. As Atkinson finds out exactly what that story is for her, she’s at the same time writing the next chapter in the history of women’s sport.