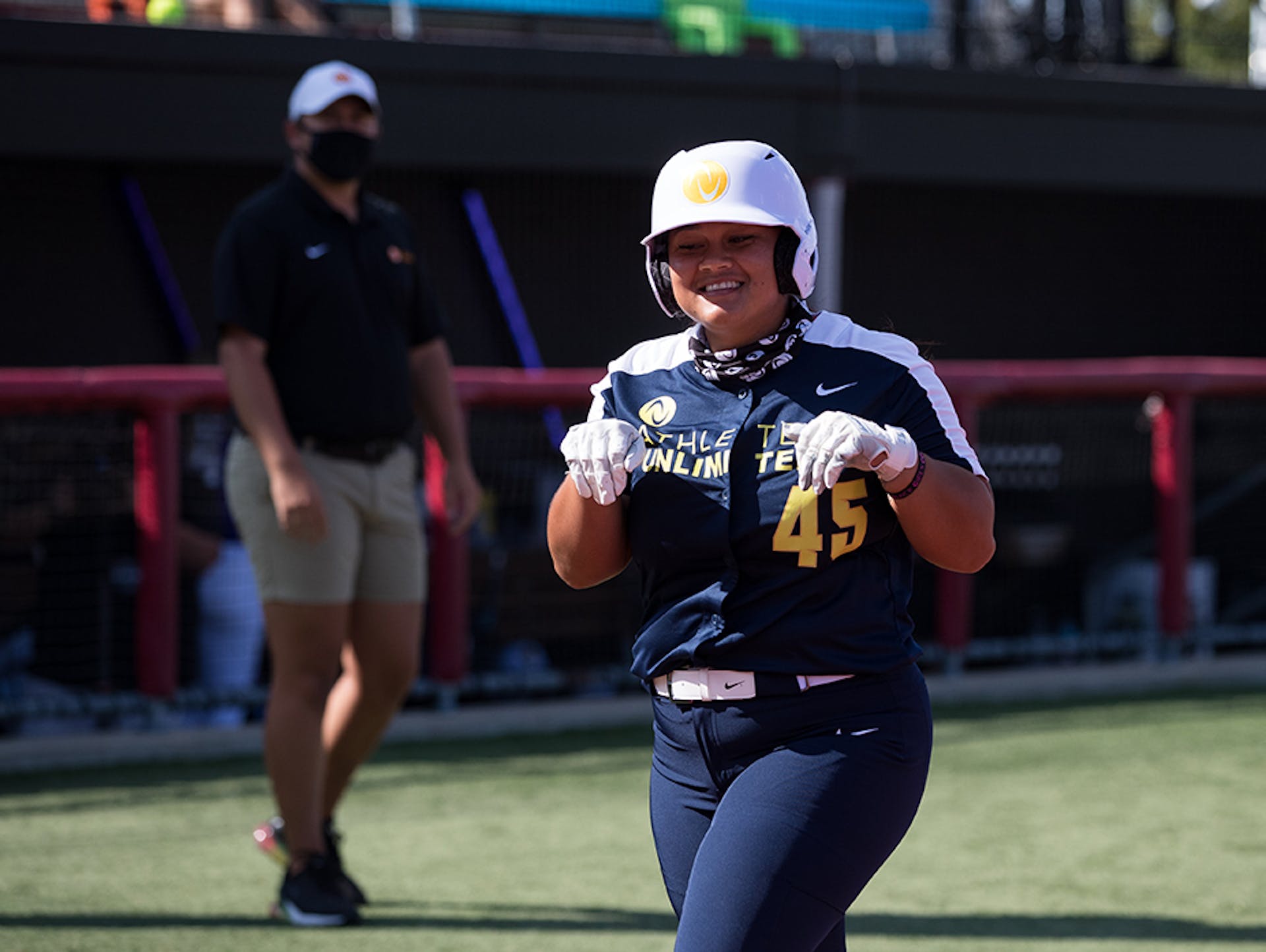 There appears to be no stopping Team Osterman, even when Cat Osterman doesn’t pitch.

Osterman was able to watch Sunday’s proceedings from the first-base coaching box as her teammates jumped on Team Sanders for eight runs in the first inning on the way to a 12-9 victory in the day’s second game at Parkway Bank Sports Complex in Rosemont.

During the first three weeks of Athletes Unlimited softball play, Osterman’s teams are 8-0.

The likely pitching matchup Monday night will be a pair of rested lefties: Osterman vs. Haylie Wagner.

In Sunday’s nightcap, Team Osterman sent 12 batters to the plate in the first, chasing starting pitcher Jessica Burroughs after two-thirds of an inning.

The big hits were three-run homers by Katiyana Mauga and Victoria Hayward. Hayward’s homer came in her second plate appearance of the inning. She led off the game with a walk. For Mauga, it was the first of two homers in the game. She hit a solo shot in the second and later added an RBI single, giving her 90 stats points. She then picked up 60 more points for being voted MVP 1 of the game.

Hayward is making a bid to be a captain for the second time this season. She had 80 stats points in the game. Michelle Moultrie also homered for Team Osterman.

“As you saw throughout the game, they were just chipping away,” Mauga said. “We just made sure that since we were visitors to come out ready to go right off the bat and score as many runs as we can. Especially from yesterday, my performance wasn’t that good, so I just came into this game making sure that that I was calm and was doing it for the team.”

In the circle for Team Osterman was right-hander Kelly Barnhill, who enjoyed her best performance of the season. She worked 5.2 innings and gave up eight hits and six runs (five earned).

Most important, she ate up innings and allowed Osterman a day off.

With rare exception, the hitters have been ahead of the pitchers in Athletes Unlimited play, and that can take a toll on confidence in the circle.

“Today I did my job; I did what Cat needed me to do,” Barnhill said. “I was supposed to eat innings for her so she could have a day of rest to be fresh. She’s been throwing a lot the last couple of weekends. Today was really good for me. I felt my pitches were working really well. I had time to be on the mound and settle in a lot more than I have had in the past two weeks.”
About that confidence, Barnhill said it’s a matter of perspective.

“I think one of the things you have to remember is that these are literally the best hitters in the entire world,” she said. “And there is no lull in the lineup.”

As it turns out, there was plenty in this game for Team Sanders as well. After the first, Team Sanders players picked up 60 innings points each as their attempt at a comeback fell just short with three runs in the bottom of the seventh.

Captain DJ Sanders homered and doubled to pick up 60 individual points, and Samantha Show homered and walked for another 50. Sanders was the game’s MVP 2, earning 40 additional points. Show received 20 more points for being voted MVP 3

Hayward was a captain for the second weekend of competition. Another good performance Monday night could have her drafting a new team Tuesday.

“It was fun; it was a challenge, just not being able to focus solely on your own performance and being responsible for everybody,” Hayward said of being captain. “There’s definitely added pressure that comes with that. But I’m in this league because I like that pressure and I love a good challenge. There’s a lot of good hitters in there right now, a lot of great pitchers in the mix. So I’m not sure it will happen for me this week. But obviously I’m just trying to do the best I can.”

Recap: Moreno pulls within 57 points of Apuzzo ahead of Sunday's finale