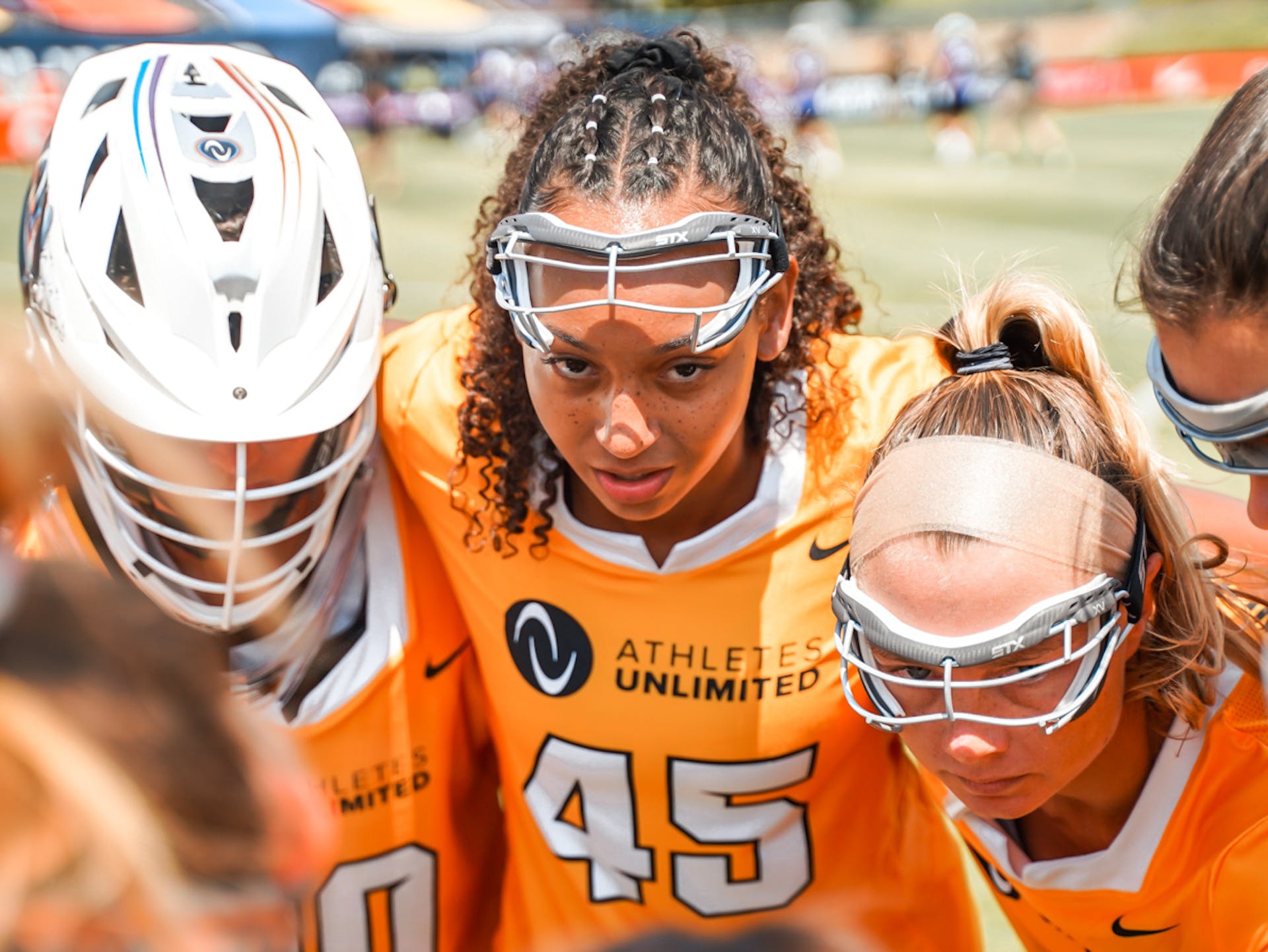 Team Wood and Team Warden opened up Athletes Unlimited’s Women in Sports celebration on Saturday with another riveting matchup. This game could not be decided in regulation, so these teams battled it out in the first sudden victory overtime in Athletes Unlimited history.

Here’s the recap of the most exciting moments from Team Wood vs. Team Warden:

Coming off of a thrilling victory in the first game of the weekend, Team Wood was fired up.

Continuing her dominance from Friday night, Alex Aust scored the first goal of the game off a feed from Kent. Alyssa Parrella added onto Team Wood’s offensive momentum with a shot to the far side, putting the gold team up 2-0 early.

Alex Aust spending 7 months building a modeling career that culminated in an SI Swimsuit appearance, then hopping into the AU bubble and still being #sickatlacrosse is a big flex.

It didn’t take long for Team Warden to get on the board, though; Michelle Tumolo found Sam Apuzzo streaking inside for the goal, cutting Team Wood’s lead in half.

Just as Team Warden started to get hot, Team Wood went on another run. Cortney Fortunato found the back of the net for Team Wood, and Aust sent a great pass to Kent cutting inside, continuing the duo’s strong chemistry and putting Team Wood up 4-1.

With just 11 seconds left in the quarter, Apuzzo scored back-to-back goals to put her team within one. While Team Wood won the first quarter for 20 win points, Apuzzo didn’t let her team go down without a fight.

.@SamApuzzo with a BUZZER BEATING HAT TRICK to bring Team @haleywarden25 within 1 goal at the end of the 1st!🎩#BeUnlimited // 📺: @FS1 pic.twitter.com/ZlR5IU9M48

Apuzzo scored her fourth goal of the game to start the second quarter, keeping Team Warden in the game and launching herself up the leaderboard.

As Team Wood tried to start a rally early with a player-up advantage, Angie Benson made back-to-back saves for Team Warden. Haley Hicklen continued the run of stellar goalkeeping with a save for Team Wood.

With just over two minutes left in the half, Parrella got her second goal of the day with a bounce shot past Benson and put Team Wood up 5-4. Team Warden quickly scored the equalizer as Nicole Levy shot a rocket right down the middle between Hicklen’s legs, almost taking out Tumolo in the process.

Pro women’s lacrosse has always been fun. Enjoying @AUProSports new league. @MTumolo35 diving for her life to avoid Levy was everything. Can’t image how hard she rips

Team Warden won the quarter 2-1, and the weekend’s trend of close games continued as the first half came to a close tied 5-5.

To open the second half, Halle Majorana found the back of the net for her eighth goal of the season and put Team Warden up 6-5.

.@Halle_Maj37 has a goal in EVERY game so far this summer‼️

After a stretch of high-pressure defense from Team Wood, Grace Gabriel intercepted a pass and found a wide-open Apuzzo, who notched her fifth goal of the game and tied the Athletes Unlimited single-game record less than halfway through the third quarter.

The @SamApuzzo woke up and chose violence. 👊🏽

She has now scored 5 out of the 7 goals for Team Warden! 🟣 On her way to beating the single-game record.@AUProSports #Beunlimited

She has scored 5 of the 7 goals for Team @haleywarden25, tying the AU record for most goals scored in a game!💜#BeUnlimited // 📺: @FS1 pic.twitter.com/8Pfo1ggeSB

With under a minute left in the third quarter, Parrella secured the hat trick and put Team Wood within one. However, Team Warden held on to win the quarter, up by a goal going into the final frame.

Fortunato opened up the fourth quarter with a tight behind-the-back goal, quickly tying up the game.

With five and a half minutes left, Majorana received a red card. This gave Team Wood a two minute player advantage and resulted in Majorana’s ejection from the game. Benson continued to be impressive against Team Wood’s player-up advantages, standing strong in the cage for a clutch save.

Tensions rose as the game remained tied with under 30 seconds left. Team Wood tried to create an opportunity in the final moments, but they were unable to come up with a goal. In a fitting ending for such a close game, the Wood vs. Warden battle went to a three minute sudden victory overtime.

For the first time in Athletes Unlimited Lacrosse history, we are heading to OVERTIME‼️

Team Warden failed to score on their attack to start the overtime period, and Team Wood sought late-game heroics. Amber Hill made a great save on Team Wood’s attack, but Kent picked up the rebound and found the back of the net for the overtime winner.

ARE YOU NOT ENTERTAINED⁉️@unkentrolable scores the first GAME WINNING goal in OVERTIME for team @kwooood!👏👏👏#BeUnlimited // 📺: @FS1 pic.twitter.com/QteuanmmQn

@AUProSports a consistency seen is how hard Boston college alums go and how they anticipate rebound balls. It’s part of their game and I loveee that @acacia_walker has to be proud!

Overtime Lacrosse is fun. Lets do it again sometime! @AUProSports

Team Wood remains undefeated on the weekend, winning the game 8-7, but Team Warden had the top point scorer. Apuzzo led the way with 179 points, including 40 win points, 94 stat points and 45 points for being named MVP 1. Kent was named MVP 2 and had 135 points. Parrella’s hat trick earned her MVP 3 honors (+15) for 122 total points.