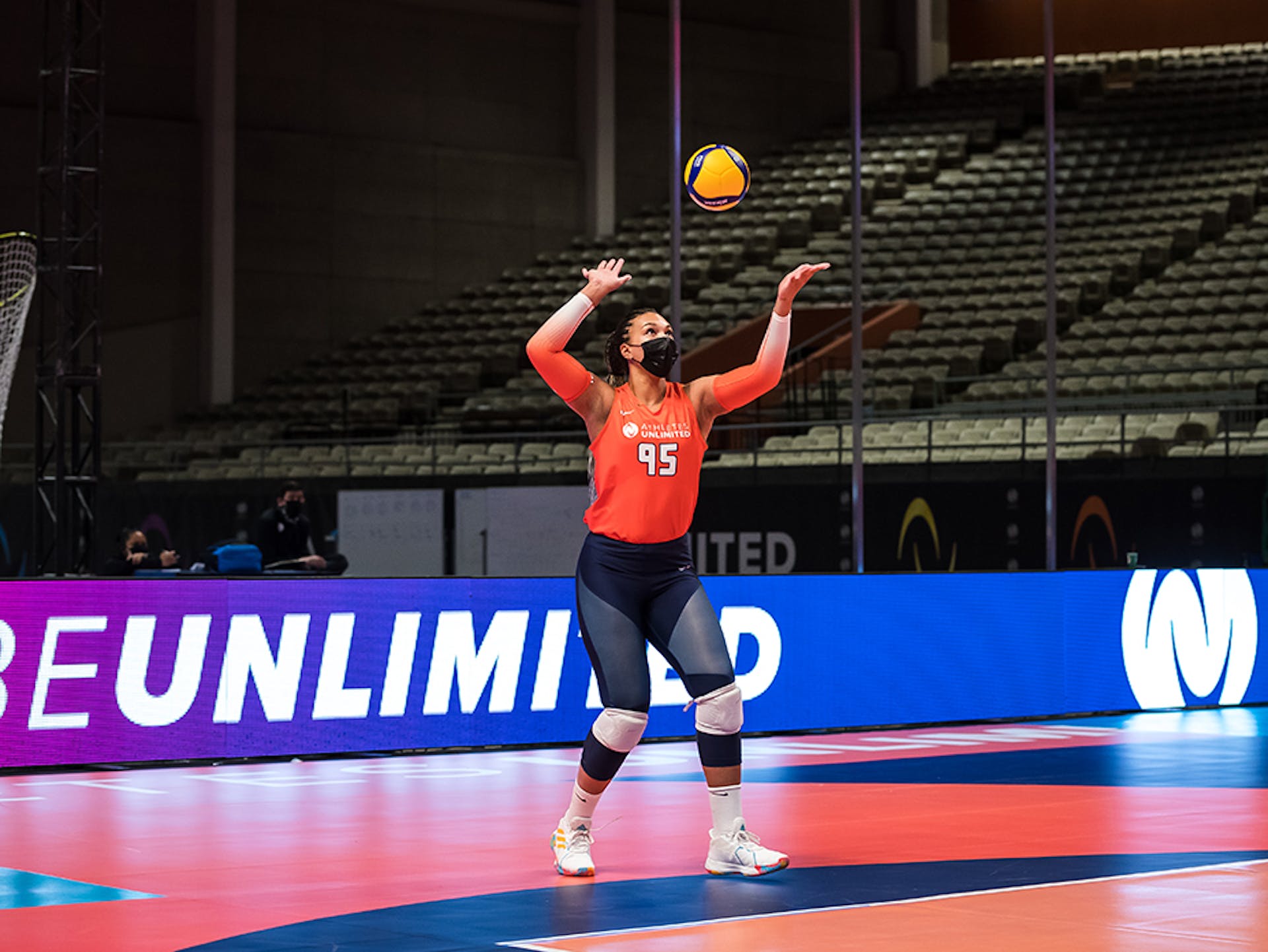 Ebony Nwanebu Selected As No. 1 Pick In Volleyball’s Week 2 Draft

The Athletes Unlimited Week 2 Draft took place on Tuesday night after three consecutive days of play where each team participated in three matches.

With the No. 1 pick, De la Cruz selected opposite Ebony Nwanebu. Nwanebu had 39 kills and hit .260, and had 25 digs over the first weekend of competition. With 603 overall points, Nwanebu is currently 11th on the leaderboard.

Edmond chose outside hitter Aury Cruz as her first pick. Cruz was the captain of Team Gold for both of Athletes Unlimited’s scrimmage drafts and for the opening weekend of matches. Cruz’s professional volleyball career spans 25 years and will provide veteran knowledge for Edmond, who made her rookie debut over the weekend.

Lowe chose outside hitter Symone Abbott for her first pick. Abbott had 22 kills on 59 attempts along with 23 digs over the course of the weekend.

To finish out the first round, Larson chose opposite Willow Johnson, a left-handed hitter who had a .210 attack percentage and nine digs for the weekend. With back-to-back picks, Larson chose setter Samantha Seliger-Swenson, who had 99 assists during the prior three days of matches. Somewhat ironically, Larson’s selection of first and second round picks were the same as Cruz’s the week before, although she flipped the order they were selected in.

In the second round, Lowe selected middle blocker and former USA teammate Lauren Gibbemeyer. The pair also played on the same team during the first week of Athletes Unlimited.

De la Cruz selected setter Kelly Hunter to end the second round. Hunter drastically improved her position from the draft last week where she was selected by Team Sybeldon in the eighth round. She was the second setter to be selected in this week’s draft.

In the fourth round, Lowe struggled to make her selection before she ultimately chose Erin Fairs. Lowe used all of the allotted two minutes for her pick before she managed to make her decision.

“Jamie and I were having a slight disagreement about who to choose, and he was looking at stats a lot. I like to look at stats, but I also wanted to hear what Symone and Gibby were saying, and what they were saying was kind of conflicting a little bit with stats and I also had a personal opinion,” Lowe said. “The full minute and 40 seconds I was thinking about what Jamie was saying and I was thinking, ‘Okay, I’m going to choose that person,’ but then when it came right down to it, I just went with my gut feeling and chose Erin Fairs.”

In the fifth round, Tiffany Clark was selected by Edmond, her own Blue teammate from the week before. Clark was the first libero to be selected and was a captain during the first week of competition. For the weekend, she had 34 digs and a .70 positive reception percentage.

The teams will hit the court again on Saturday as Team Lowe faces Team De la Cruz at 6 p.m. ET/5 p.m. CT, and Team Larson goes up against Team Edmond at 8:30 p.m. ET/7:30 p.m. CT. Both matches will be available on Facebook, Twitter, Twitch, YouTube, and on AUProSports.com.