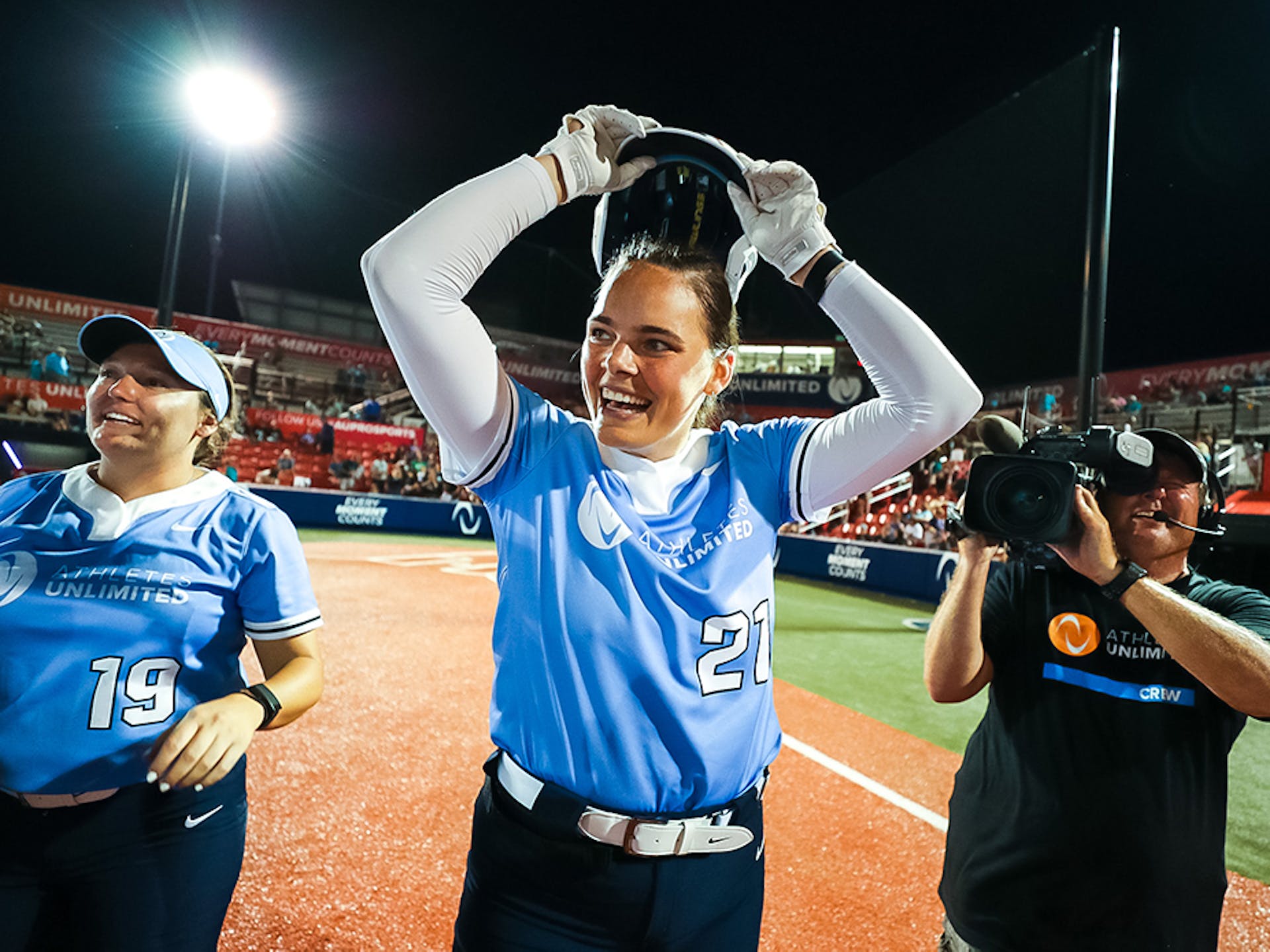 Gwen Svekis was a little bit mad at herself Monday night.

One of the best hitters in Athletes Unlimited, Svekis was all ready to sacrifice bunt runner Aleshia Ocasio from second to third in the bottom of the eighth inning of a 2-2 game.

Svekis couldn’t get a bunt down, but all was well that ended well. Instead, she then squared up a pitch from Carrie Eberle and hit it into center field for a run-scoring single that gave Team Hayward (Blue) a thrilling 3-2 victory over Team Piancastelli (Purple) at Parkway Bank Sports Complex.

Svekis is always a power threat – she doubled earlier in the game. While it might have been surprising to see Svekis bunting, she knew the situation called for it.

“I would rather get the bunt down,” said a sheepish Svekis, who nevertheless earned 60 extra points for being voted MVP 1 by her peers. “Bunting is the easiest part of our game. It should have been on the ground. But I’m happy I didn’t completely buff it up and I got the ball up the middle there. That’s it. Nice and easy. Right back up the middle.”

There has been a little bit of everything over the first week of play in Athletes Unlimited Softball: home runs, great pitching from starters and relievers, a no-hitter Sunday by Cat Osterman and the first extra inning game in league history.

Monday’s first game was tense and taut from beginning to end.

Team Hayward got on the board in the bottom of the first inning on a home run by Ali Aguilar. It was her first hit in Athletes Unlimited. In the second, Svekis opened with a double and later came home on a single by Morgan Zerkle to make it 2-0.

The games have made a big impression on Aguilar.

“Honestly, I didn’t know how it was going to go,” she said. “I didn’t know how the points were going to work. But I’ve been having a lot of fun, and I think just the way it’s set up to win innings, to win games, that’s exactly how you want to play softball. It’s like the most fun softball I’ve ever played.”

Aguilar was the game’s MVP 3, earning 20 additional points in addition to her 40 for the home run.

Speaking of home runs, Purple captain Erika Piancastelli got her team back into the game with a booming homer off Ocasio (MVP 2 and 40 extra points) in the sixth. An RBI double by Janie Reed in the top of the seventh tied the game, and when Team Hayward went 1-2-3 in the bottom half, the game went to extras.

Piancastelli was happy with her team’s fight.

“It was just an amazing game,” she said. “Our attitude was just take it one inning at a time and just win as many innings as we could. We just really wanted to use our team for everything that we have, use the small game – steal, bunt, whatever we had to do to win that inning, that’s what we were going to do. We did a pretty good job. It didn’t go our way. It was so much fun.”

Piancastelli’s team had a chance in the top of the eight, but a rundown double play with a runner being tagged out at the plate (confirmed by replay) ended the inning, setting the stage for Svekis’ heroics in the bottom half.

Ocasio started in the circle for Team Hayward and worked 6.1 innings, giving up six hits and two runs. Haylie Wagner got the win with a clutch 1.2 innings of relief.

Sara Groenewegen started for Team Piancastelli and pitched two innings. The hard-luck losing pitcher was Eberle, an unsung hero of Athletes Unlimited so far. She worked five strong innings, and because the final inning started with a runner on second, the run was unearned against her.

“She did an amazing job,” Piancastelli said. “She stayed in the circle. She was confident. She was confident every single pitch. We had a really good vibe going with pitch calling. She just owned it. She died everything she could. She used her defense, and she just really trusted her pitches. I’m really proud of her and she’s one to watch out.”