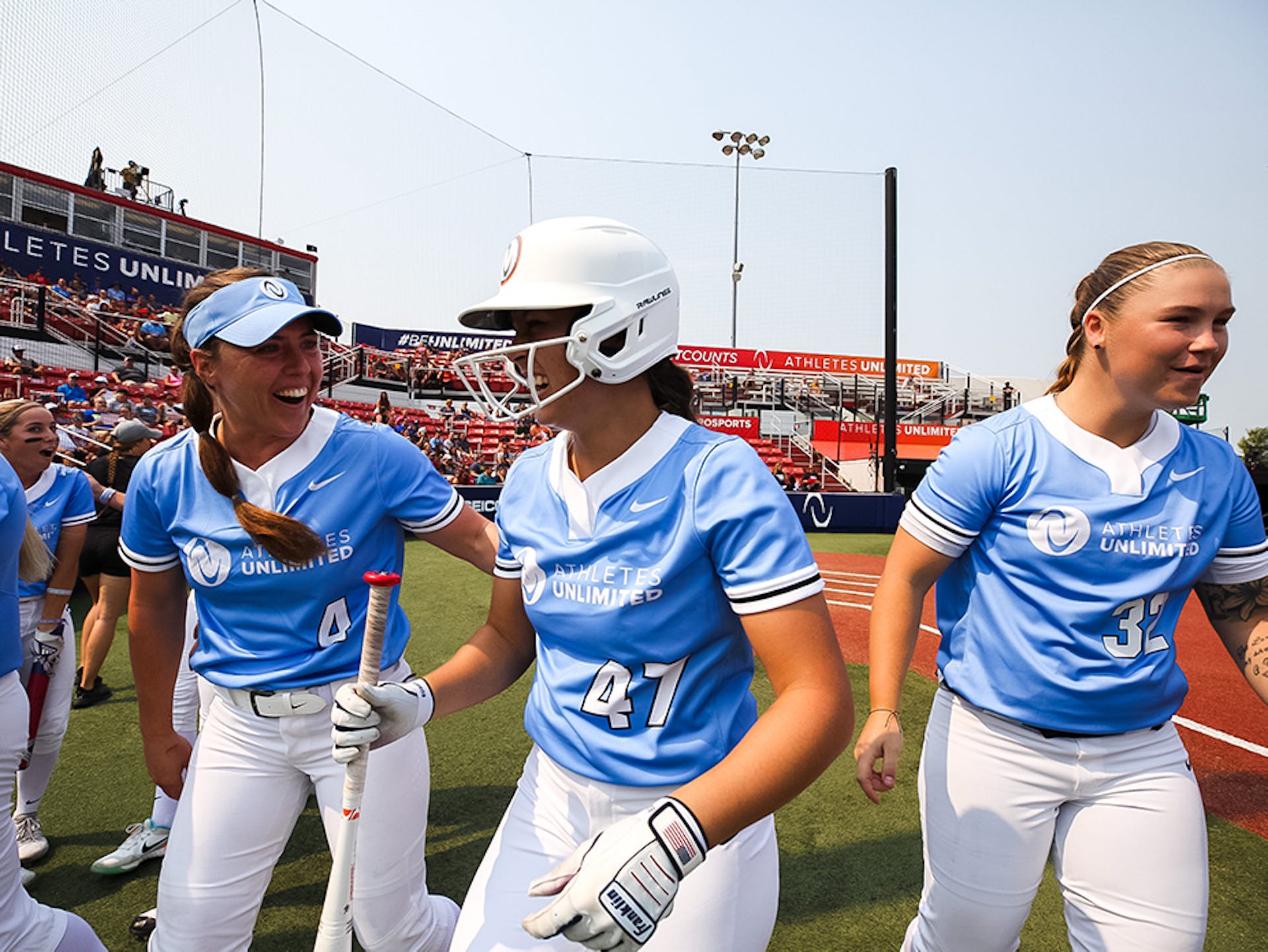 How’s this for a fine how-do-you-do? Or should we say a fine “aloha?”

Bubba Nickles stepped into her first day of Athletes Unlimited in a big way Saturday. She hit the first pitch see saw as an Athletes Unlimited player for a leadoff home run in the second inning to help Team Jaquish (Blue) slug its way to a 14-6 victory over Team McCleney (Orange).

Nickles later added an RBI single and a walk, making her debut a memorable one. She finished second in game MVP voting for 40 bonus points. A U.S. Olympian snd silver medalist this summer, she signed with Athletes Unlimited to replace the injured Sami Williams.

“It was pretty quick,” Nickles said of her journey to get to Rosemont. “I was actually in Hawaii watching my boyfriend playing football. Then I got a phone call. After Hawaii, I went home. Four-hour drive home, and then I flew out 6 a.m. the next morning and made it here just in time for the draft.

“It was just an exciting experience just to be a part of this atmosphere, being a part of Athletes Unlimited. I know a majority of the girls here. It was really fun to just play softball again on the same field together.”

All in all, there was no time wasting by Team Jaquish players. Hitters saw their pitches and hit them – far, early and often.

Home runs by Nickles, Kelsey Harshman, Amanda Chidester and Dejah Mulipola helped Jaquish’s team jump out to a 9-0 lead by the third inning. The homers by Nickles, Harshman and Chidester all came on the first pitch of their at-bats.

For her part, Mulipola hit a pair of homers. She added a three-run blast in the top of the seventh.

Mulipola credited teammate Chidester with helping her at the plate.

“She’s just getting me back to my own groove,” said Mulipola, the MVP 1, good for 60 extra points. Chidester was third in player MVP voting, for 20 points. “She’s been a relentless teacher with everything. She’s just knowledgeable about the game as well as many of the athletes here, so you’d almost be a fool not to kind of listen and learn.”

Jaquish’s started quickly, with Aliyah Andrews walking and stealing second base to lead things off. After Jaquish walked, Harshman hit a three-run homer in the first pitch she saw from Sara Groenewegen for her first Athletes Unlimited home run. Harshman and Groenewegen were Team Canada teammates in this year’s Olympic Games.

Nickles led off the top of the second with a shot to left-center on the first pitch she saw.

Not to be outdone, Chidester picked on a first pitch from reliever Danielle O’Toole for a three-run homer in Team Blue’s five-run second. It was Chidester’s Athletes Unlimited-leading fifth home run of the season and the longest home run this season at 279-feet-3-inches.

Harshman and Groenewegen have been college rivals in addition to Olympic teammates, so there may have been a familiarity factor at work.

“I’ve had a lot of AB’s off Sara G as teammates and as rivals in college,” Harshman said. “It feels a little bit at home when I hit off her.”

As for the aggressive approach, Harshman said that’s important against good pitchers.

“You want to be aggressive early in the count,” she said. “Sara’s an elite pitcher, and she gets a lot of success when she gets ahead in the count. If we can get ahead and get some barrels to the balls, I think that’s what we ultimately wanted to do, and we were able to do that today.”

Carrie Eberle started for Team Jaquish and worked three-plus innings before being relieved by Taylor McQuillin, who shut the door on Team McCleney when they were threatening. McQuillin earned the victory to improve to 2-0 with four innings of two-hit, two-run ball to finish things off. Ali Aguilar hit a two-run homer (40 points) off McQuillin in the seventh. Aguilar earlier picked up 20 individual points with a double. Team McCleney scored all of its runs in  the bottom of the third.

“We were mixing speeds a lot,” Mulipola said. “Taylor’s a gamer. Obviously I know her, and she knows me very well. We just work well together. She was attacking the zone, attacking the batters. She wasn’t fearful against their powerful lineup. They had a lot of great hitters in their lineup, but we just went right at them.”