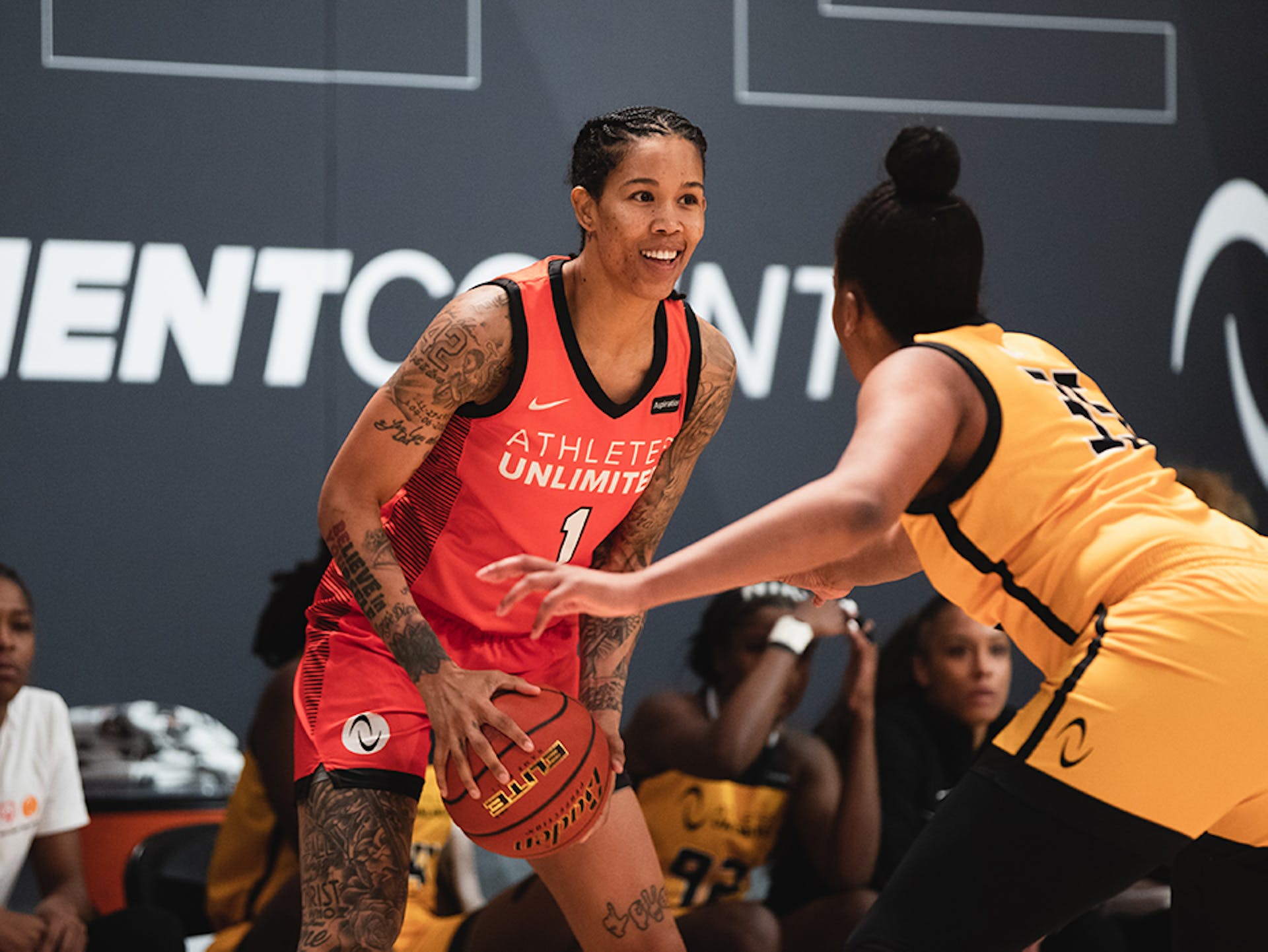 LAS VEGAS — Team Harrison hit an offensive snag Friday night, scoring only 71 points in a loss to Team Sims and fell to 0-2 for Week 4.

Saturday night Team Harrison had 71 points by the 3:16 mark of the third quarter, as it rebounded for a 100-93 victory over Team Hawkins inside Athletes Unlimited Arena in the Week 4 finale.

Dominique Wilson and Ty Young came off the bench to score 16 and 13, respectively, and Lexie Brown and Isabelle Harrison each had 12 points.

“We knew the gold team was gonna be a little tired, so our first plan was to run a lot and I think that benefitted us as the game went on.”

Team Harrison thwarted Team Hawkins’ bid to complete a three-game sweep in Week 4, thus marking the first time in Athletes Unlimited Basketball there was not a team that went 3-0 in a single week.

One night after winning in dramatic fashion, the emotion seemingly ran out for Team Hawkins, which got a buzzer-beating 3-pointer from Sydney Colson to defeat Team Cloud in overtime on Friday.

Thus, both Brown and Wilson said the goal was to attack what they knew would be a weary squad.

“We knew they were tired, but also we knew the two games we lost we had more in the tank, we’re a way better team” Wilson said. “I think tonight we really proved to everyone that when we play together, play defense well that we can light it up and we can win games.”

Tianna Hawkins led her squad with 29 points and 12 rebounds, her league-high eighth double-double.

Team Harrison got a balanced attack in the first half, with six players contributing between 6 and 10 points en route to a 48-43 halftime lead. Lexie Brown led the attack with 10 points, while Taj Cole had eight points, five rebounds and three assists. Both teams shot relatively even in the first half, with Team Harrison hitting 18 of 38 (47.4%) from the floor and Team Hawkins sinking 17 of 37 (45%). But it was Team Harrison’s 3-point shooting that helped give them the edge, as they hit 5 of 12 (41.7%) from beyond the arc. Team Hawkins made just 25% (3 for 12) of its shots from 3-point range in the opening 20 minutes.

With Team Hawkins within five to start the second half, Team Harrison used a 23-11 run to open up a 17-point lead, with Wilson scoring seven of the points during the run.

Team Hawkins made a late push after falling behind by 20 with 7:18 left in the game, but it was too late with Team Harrison in control.

KEY MOMENT: After taking a 48-43 lead in the first half, Team Harrison began to pull away by scoring 13 of the first 20 points in the second half to claim a 61-50 advantage it did not relinquish.

NOTES: Earning MVP 1 honors was Hawkins, who added 90 points for 414 points overall. Walker received MVP 2 honors for 60 points and 410 total, while Kalani Brown earned 30 points for MVP 3 (254 overall). It was time this season all three MVP honorees were selected from the losing team.

As the final week of the inaugural season begins on Sunday with the Week 5 draft, Hawkins will continue to captain the gold team at 5,425 points so far this season. Behind her with 4,707 points is Natasha Cloud, who will captain the orange squad. Harrison drops down to No. 3 on the leaderboard as the blue team captain with 4,527 points, while Lexie Brown will captain the purple jerseys with 4,212 points.

Team Harrison became the 10th team this season to reach the 100-point mark. … Walker extended her streak of consecutive double-digit scoring efforts to seven in a row. … Mitchell scored in double figures for the eighth straight game, and also dished out a season-high nine assists. … Hawkins has reached double figures in scoring in all 12 games this season, joining DiJonai Carrington as the only players in Athletes Unlimited Basketball to do so.