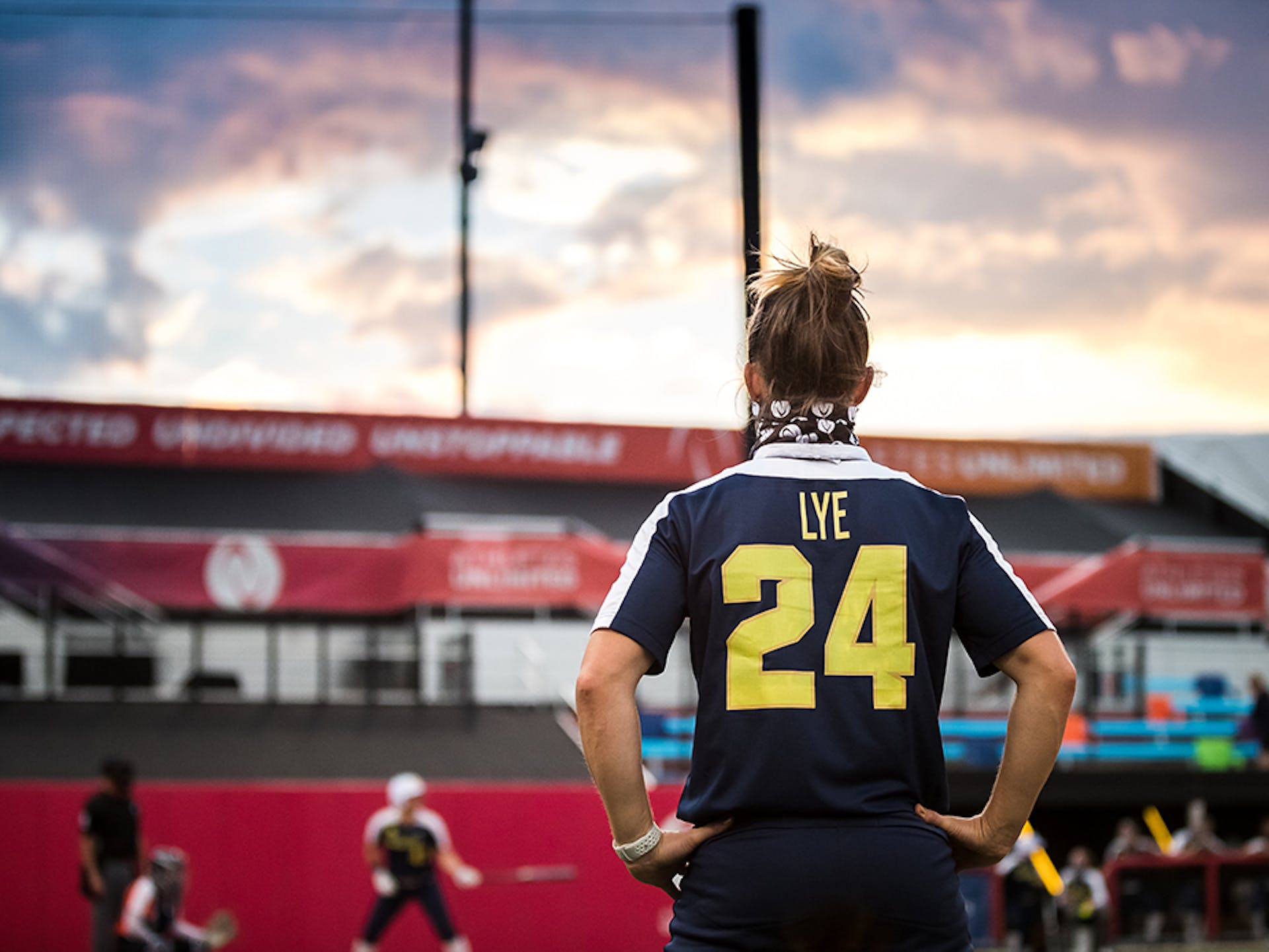 Throughout a career of many pathways, Joey Lye found her way to softball

A few years ago, Softball Canada conducted personality tests on its players. Joey Lye was deemed an outlier.

“They were absolutely fascinated,” Lye said, because “I was so different in the scrimmage compared to the assessment.”

“I am very introverted,” Lye admitted – so mellow and anger-proof that “my wife sometimes asks if I have a heartbeat.”

On the field, though, the 5-foot-3 utility player hollers so much that she was concerned that Athletes Unlimited players might be advised not to yell (as a pandemic-related precaution) “because that’s what I do!”

Yet Lye’s fiery motivational style helped her gain a four-year captaincy of Team Canada and leadership roles at Williams College in Massachusetts, where she graduated in 2009 with a psychology degree.

It also translated well to an 11-year coaching career at four different colleges in the eastern United States.

The duality doesn’t end there. Lye, 33, believes she is the only player in the Athletes Unlimited league whose other primary sport was ice hockey.

In her youth, Lye played – not two but – four sports at Birchmount Park Collegiate Institute, a Toronto high school that required her to take a physical test to gain admission to its Exceptional Athlete Program. The program’s alumni have competed in the NHL, professional track, and Olympic archery. (Juicy side note: Singer/songwriter “The Weeknd” also attended Birchmount, but not as an elite athlete.)

In college, Lye excelled at ice hockey and softball, and while the two sports’ skills didn’t necessarily transfer, the dichotomy kept things fresh. “If I had played softball year-round, I don’t think I would still be playing today,” she said.

Hockey taught Lye “to play in the moment, move past mishaps, and remain confident and aggressive. And the grueling practices helped immensely with every other sport I’ve played in my life.”

As a hockey defender, Lye also sharpened her reaction time, reflexes, hand-eye coordination – and developed a strong lower body, also useful in softball. “I was grateful not to have to buy two wardrobes from one sport to another,” she joked, “but there was always a transition, and I struggled a bit with pulled quads and stuff just because of the different movements between skating and running.”

After completing her NCAA Division-3 career at Williams, Lye quit hockey, even though hockey was an Olympic sport and softball had just been cut from the Games. She might have hung up her cleats, too, had her parents not suggested she try out for Team Canada in softball. “I thought they were 100% nuts,” she said. Yet during the next two weeks, Lye’s attitude did a 180 and she was devastated to be one of the last players cut.

She made the team on her second try. “It didn’t even cross my mind that I might never get the opportunity to play in the Olympics,” Lye said, “It was like, ‘Wow I might get an opportunity to represent my country. I always dreamt of wearing the Maple Leaf on a jersey.”

Now, a decade later, the Toronto native owns four world championship medals, softball is back in the Games for the first time since 2008, Canada qualified for Tokyo, and Lye is in a strong position to make the final 15-woman roster.

And yet? It hasn’t been a monomaniacal pursuit. While competing for team Canada, Lye also coached both NCAA softball and hockey, earned a Master’s degree online – and, in 2013, did it all on crutches while healing a fractured tibial plateau (just below the left knee) following a collision with a Cuban player on a basepath at an exhibition game in Puerto Rico. “That was an interesting little hiccup,” she said.

Lye’s third excellence is clearly time-management. Looking back, she said, “Every morning when my eyes opened, I thought, ‘Just make it to tonight.’ Literally, that’s what I said. Then I’d stay up late, answering emails, working on recruiting, get five hours of sleep and do it all again.”

So it was a bit of a shock when, just last month, in mid-July, Lye decided to give up coaching and leave her position at Bucknell University in Pennsylvania, to train full time – for the first time in her life.

Day 1 was tough. “I slept in, maybe till 10:00, got out of bed, walked into our living room and asked my wife [Baillie], ‘What do I do?’ She has a very different mentality and I respect her ability to shut off and relax, but she rarely has empathy for situations like that. She probably said, ‘Why don’t you watch TV or something like civilized people do?’”

Lye complied, but… “I still think of [my players] every day. ‘Oh, I hope they remember to do this, or I hope they’re set up to do that.’ On the other hand, it’s been such a blessing to wake up and think: today I have my workout, I can get some swings in, and I can take extra time stretching, little details that I would still do but wouldn’t be fully present for. I’d always be thinking about all the things on my to-do list, and the needs of all the other people I was responsible for. So it’s been very freeing.”

A free September also enabled Lye to sign with Athletes Unlimited. “I’m so grateful,” she said, “to witness and be part of the start something amazing.”

But the ex-coach couldn’t stay away from coaching for long. Lye has already started a program to become a bucket-list coach, a three-year certification that will enable her to help others achieve their lifelong dreams.

Lye still has a few bucket-list items of her own. Among them is an Olympic medal in Tokyo, and, when she retires from softball in 2021, Lye is determined to own a home on the water. To that end, Lye said, “I’m obsessed with finding affordable waterfront properties and spend way too much time on Zillow. River, lake, I’m not fussy; if you can get a paddleboard on it, I’m game.”