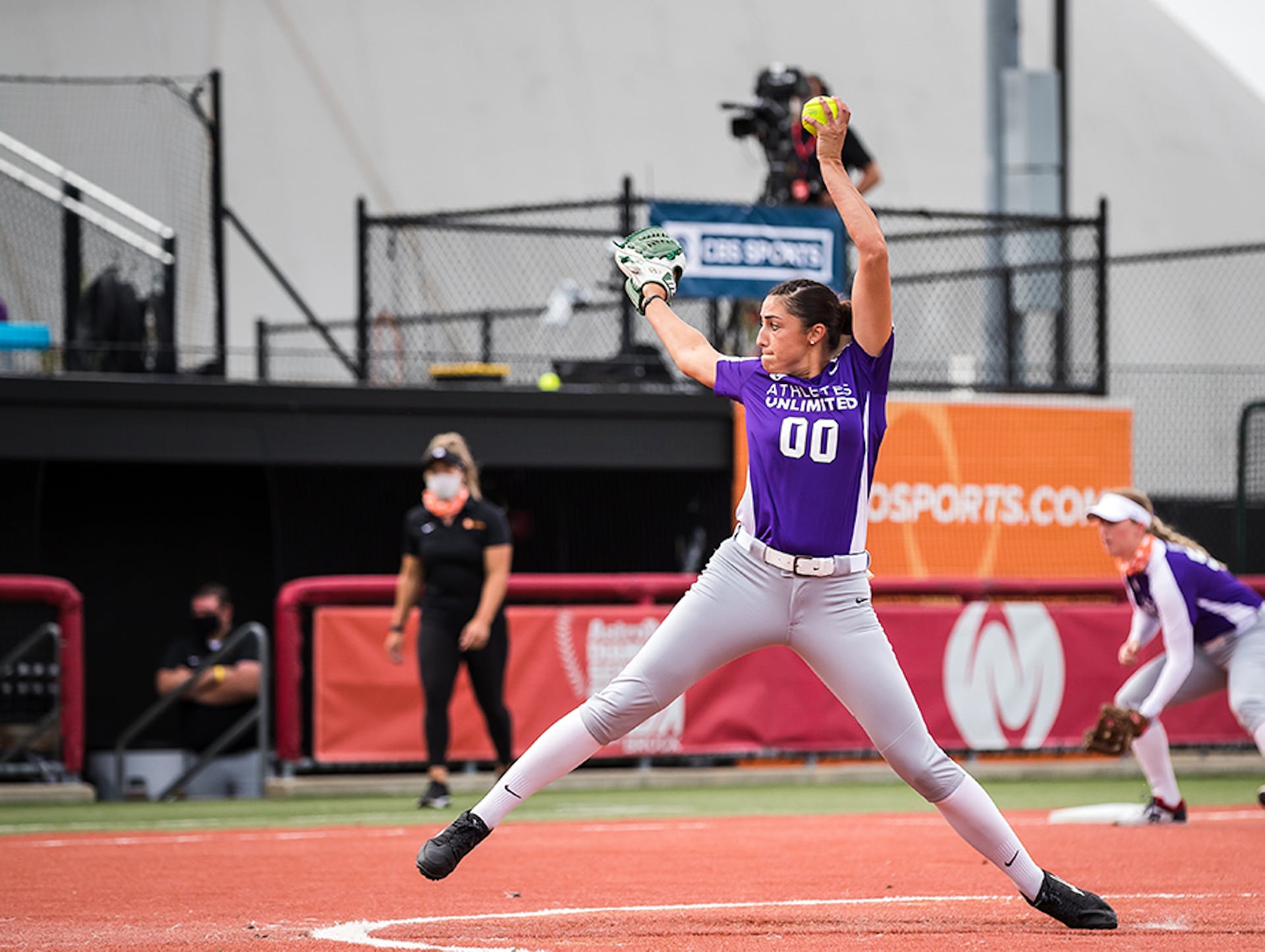 There was no real chance that captains spots were on the line in Monday afternoon’s game between the Blue and Purple teams at Parkway Bank Sports Complex.

But pride was definitely on the line, and that can be a powerful motivating force.

On top of that, players on both teams might have been looking to impress the four captains who will draft new teams Tuesday for Athletes Unlimited’s next round of softball games.

One player who had to come away feeling good about herself was starting – and finishing – pitcher Danielle O’Toole of Team Purple, captained by Sami Fagan.

After a rough outing in her season opener, O’Toole has steadily found herself. On Monday, she started and worked four innings of one-run ball.

Oh, but there was more, much more.

Team Fagan had a seemingly comfy 7-2 lead heading into the bottom of the seventh inning. But Team Blue, captained by Nicole Pendley would not go quietly, pushing across three runs against reliever Randi Hennigan. After Morgan Foley walked a pair of batters, the call for relief went to … O’Toole.

The left-hander retired the next three batters on a pop out, a sacrifice fly and a strikeout to strand a pair of runners and allow her team to escape with a 7-6 victory.

For her heroics, O’Toole earned MVP 1 honors and an extra 60 points for a total of 210 for the day.

Team Fagan finished the first round of play with a record of 1-2 while Team Pendley went 0-3.

“When I first came out (of the game), no, I did not expect to go back in,” O’Toole said. “Second, when we did decide that might be a possibility, I didn’t have time to think about it or mentally prepare. I went out and threw, I don’t know, maybe seven warmup pitches. Then I walked onto the field. Very quick transition. Not much time to think.”

The pitcher known as “Tooly” came into the game with an ERA of 6.13, thanks to a loss and a no-decision in her first two outings.

Monday’s performance under pressure had to be a nice lift for her.

“It feels good,” she said. “It’s nice just to kind of make sure our team feels good after the kind of start we had. It hasn’t been bad. It’s just that everyone here is so good that it’s hard to feel good all the time. I would just say that working together has been fun, and I’m kind of glad we got the first weekend done.”

Interestingly, Fischer was a ninth-round pick in last week’s inaugural draft. Perhaps she opened up some eyes for the captains picking new teams for the coming weekend. She laughed and said making an impression for the next draft was not on her mind.

“Honestly, no,” she said. “I was kind of irritated with myself my first at-bat. I struck out and was not aggressive. It was not my approach, and I think that fueled the rest of my day because I did not want to go in there and feel like that again. So I went out there and swung the bat the way I knew I should have in that first one, and what happened happened.

The third MVP was Sahvanna Jaquish from Team Pendley. She was 3-for-3 with a pair of doubles, three RBI and a walk. She finished the first round with 170 points. More important, she said she was happy with the way her team came back.

Team Fagan jumped out to a 2-0 lead in the first. The teams traded runs in the third before Fischer’s three-run homer in the top of the fifth. The teams each scored a run in the sixth.

“We didn’t expect to come out there and make the game close,” she said. “We just wanted to just push one run across and win the inning. But then found momentum and took that and ran with that. Then Tooly came in and did her thing to shut us down. I was like, ‘Man, this is getting exciting.’ This can happen with any team because, again, we’re all so good, It’s really entertaining to be on teams like that.”