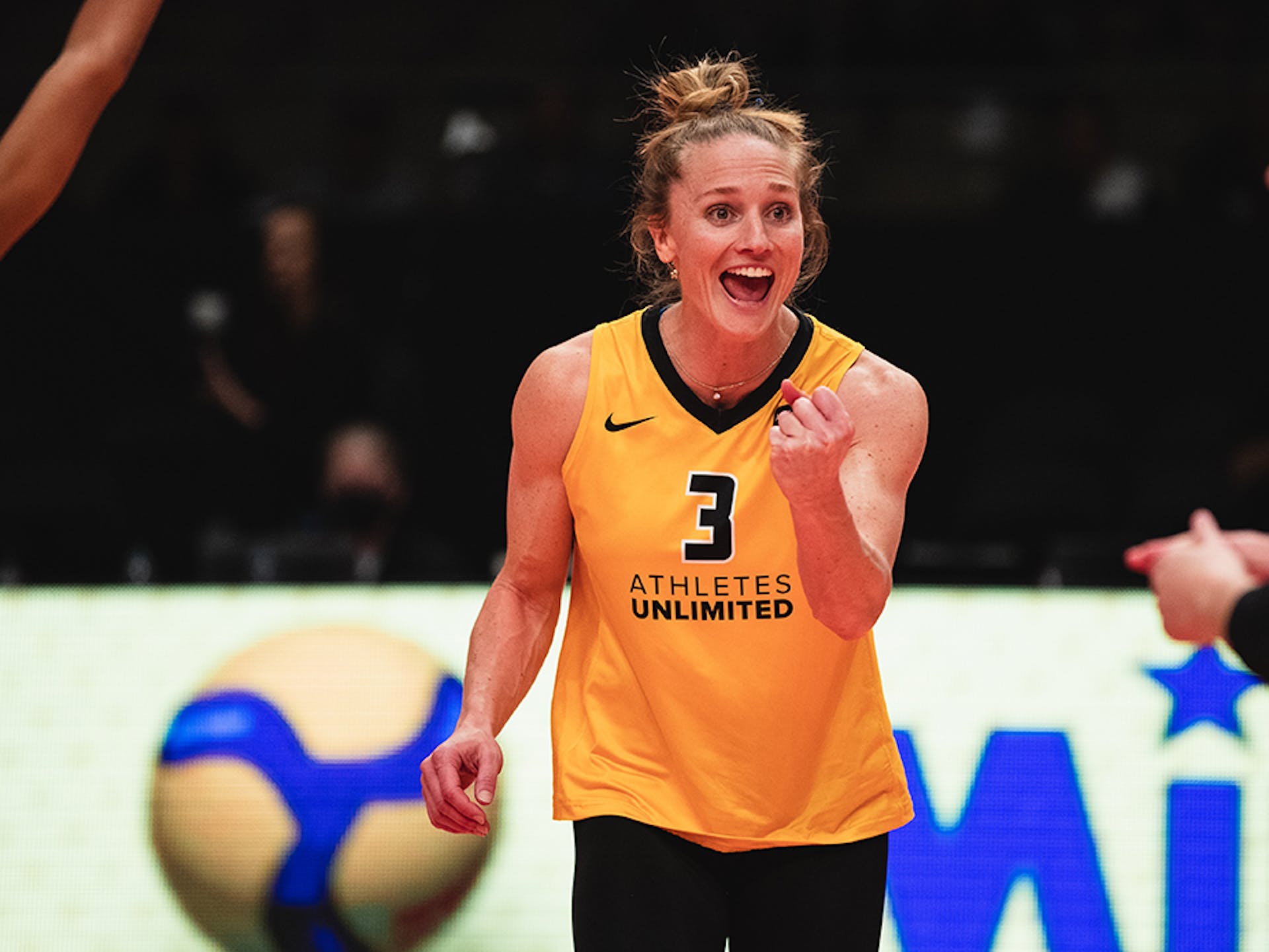 Nine months postpartum and back on the court like she never left, Carli Lloyd, like many Athletes Unlimited athletes, is grateful for the opportunity to play professional volleyball again.

Lloyd was pregnant during AU’s inaugural volleyball season, and while she had hopes of playing again, she wasn’t sure what it would look like.

The support from the league and other players who are new mothers has been encouraging for her. “I wasn’t sure I would come back, but when I heard the wonderful things about Athletes Unlimited, I decided this would be a great test to see if I could do it,” Lloyd said.

It’s amazing how much the league stands by its female athletes and gives us the space to have a voice and empower each other.
Carli Lloyd

Lloyd spent months at home training and preparing for the season. “I worked really hard at home to get my body back in shape. I wanted to see how it felt to compete again and see if I had something left in the tank to continue doing this.”

While Lloyd was pregnant and shortly after giving birth to her daughter, she had hopes of returning to the court. She credits AU with opening up the door to live out her dreams that were put on pause.

“It’s shown me I love the sport and want to continue playing,” Lloyd said. “Athletes Unlimited has given me the confidence to play again and see that it’s still possible.”

Nearing the end of the season, she couldn’t be more pleased with her return. “I can happily say it’s been a great experience,” Lloyd said. She’s even considering what her career will look like in the coming months following AU.

Lloyd mentioned her dream right now is to play in Italy and bring her daughter, Storm. With the support of Storm’s father and her own mother, she feels hopeful that in the coming months this may be possible.

“It’s been our dream to be in Italy with Storm and have her learn the language. Her dad can work remotely and would be with us as much as possible,” Lloyd said.

Though she dreams about the future, Lloyd is still focused on finishing out the season strong in Dallas.

“My goal every week is to be connected to my team. I want to do everything I can to help my team win and each day I’m thinking about what my role is and how I can help this group succeed.”

When it comes to the way the league is structured, Lloyd said she wasn’t initially sold on the format for fear that the focus may be more on the individual and less on the team.

“Volleyball is a team chemistry sport, all the pieces matter and you need fluidity to be successful.” Lloyd said. “Now that I’m here and see the format, I get the points system and think it’s a great way to have it set up.”

Each week is a fresh start. Another opportunity to prove herself and help her team.

“You get a new team every week, so if your team doesn’t vibe you have a new opportunity.” Lloyd said, noting the helpful advice she received from a second-year athlete. “It’s a new day no matter what.”

As her season comes to a close, Lloyd can’t help but be grateful for the opportunity AU has provided.

“It’s amazing how much the league stands by its female athletes and gives us the space to have a voice and empower each other. It’s amazing to be part of a thoughtful organization, an organization that’s after the whole person, not just the athlete, and being able to bring Storm because I wouldn’t be here if she couldn’t be with me.”

Our Basketball athletes and their causes