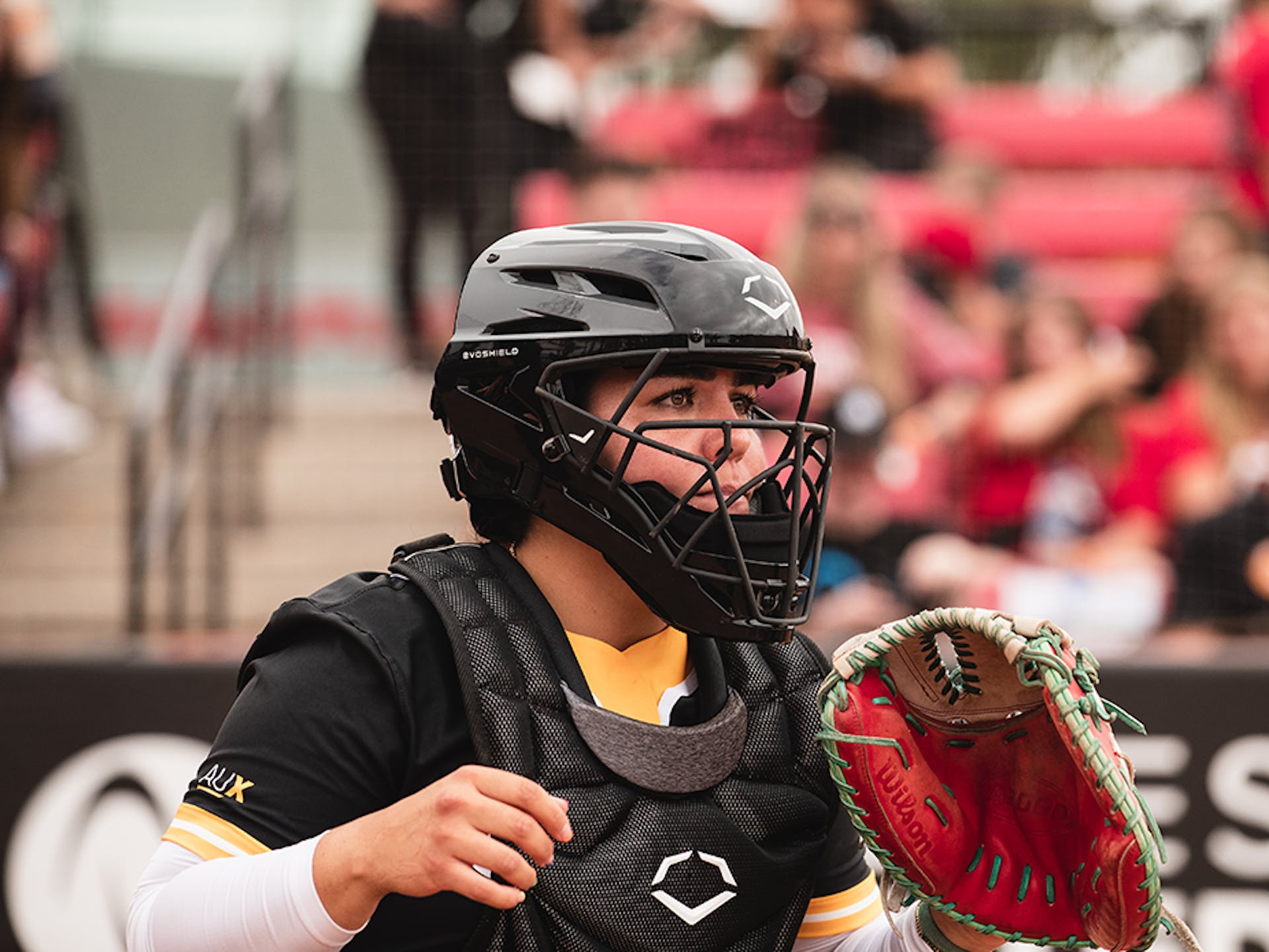 About 25 minutes south of San Diego State University down 1-805 is Discovery Park – a collection of ballfields where Bonita Valley Girls Softball plays. It’s also where Sashel Palacios’ softball dreams started in her little catching gear that covered her red, white and blue uniform.

Since then, the equipment has stayed the same but the uniform has changed over time.

And most recently, orange and white, competing in the AUX Softball season. When Palacios was extended a contract at the end of season two to play another year with the league, there was an additional season in writing: AUX, a condensed three-week season intended to expand the league and opportunities for athletes to play more. The location would move from the league’s home in Rosemont, Illinois to another city: San Diego, California.

“Everybody was shocked for a second because it’s been so long since professional softball has been in San Diego,” Palacios said. “I don’t think it felt real till these couple games… To finally be here playing in this beautiful city that I freaking love is just, I’m so grateful and so happy that it was able to happen.”

She grew up going to the Olympic Training Center and San Diego State to watch softball from a young age. She hopes the return of professional softball to her city will reignite the same fire that was lit in her.

I got to see it. I got to be like, 'That's my next goal.'
Sashel Palacios,
Catcher

Palacios describes San Diego as a baseball dominant city but believes there’s room for softball in town because she was “that little girl.”

She would stand along the fence, waiting for hours after exhibition games for autographs from Olympians. Now she sees those same little league All-Stars waiting for her at the end of her Athletes Unlimited games.

A new face in the stands

As Palacios would say, “all (her) people are here.”

Her dad Kiko, mom Soida, sister Sharlize and brother Sabian have been in the stands.

But being in San Diego allows one of her biggest fans to finally see her play as a professional: her grandpa. He’s spent years tuning in to watch her on TV or streaming her games. He’d often be at the house while she worked in the cage with her dad but never able to see that finished product on the field.

“My brother and sister in the stands were like, ‘Grandpa would not be quiet about how you catch and how you play.'”

Until now, Palacios often wasn’t able to look into the stands and see her family’s reaction when she plays. Especially not when she hits a grand slam.

Palacios and Team Gibson trailed by seven behind Team Mulipola on Sunday after going three innings without a hit. They loaded the bases in the top of fourth and Palacios launched one into the right-field bleachers to tag all four bases with the first grand slam of AUX Softball.

It was a moment that, without the expansion of AU, would not have been one she shared with her entire family. You couldn’t have written it better: Palacios back in her hometown, on Father’s Day, hitting the grand slam that changed the course of the game.

A good mindset = great results@seashel_13 chatted with me about her slam and how it’ll have to sub for a Father’s Day card today 😂#AUX | @AUProSports pic.twitter.com/FaEuv9QTEI

Later in the game when she was walked, she looked up into the stands from first base, smiled, and flashed them a thumbs up.

For Palacios, her journey took her right back to where she started in this game. But for all the softball and baseball players in the San Diego area, they won’t only aspire to be a Fernando Tatis Jr. or Wil Myers.

They can be a Palacios too.