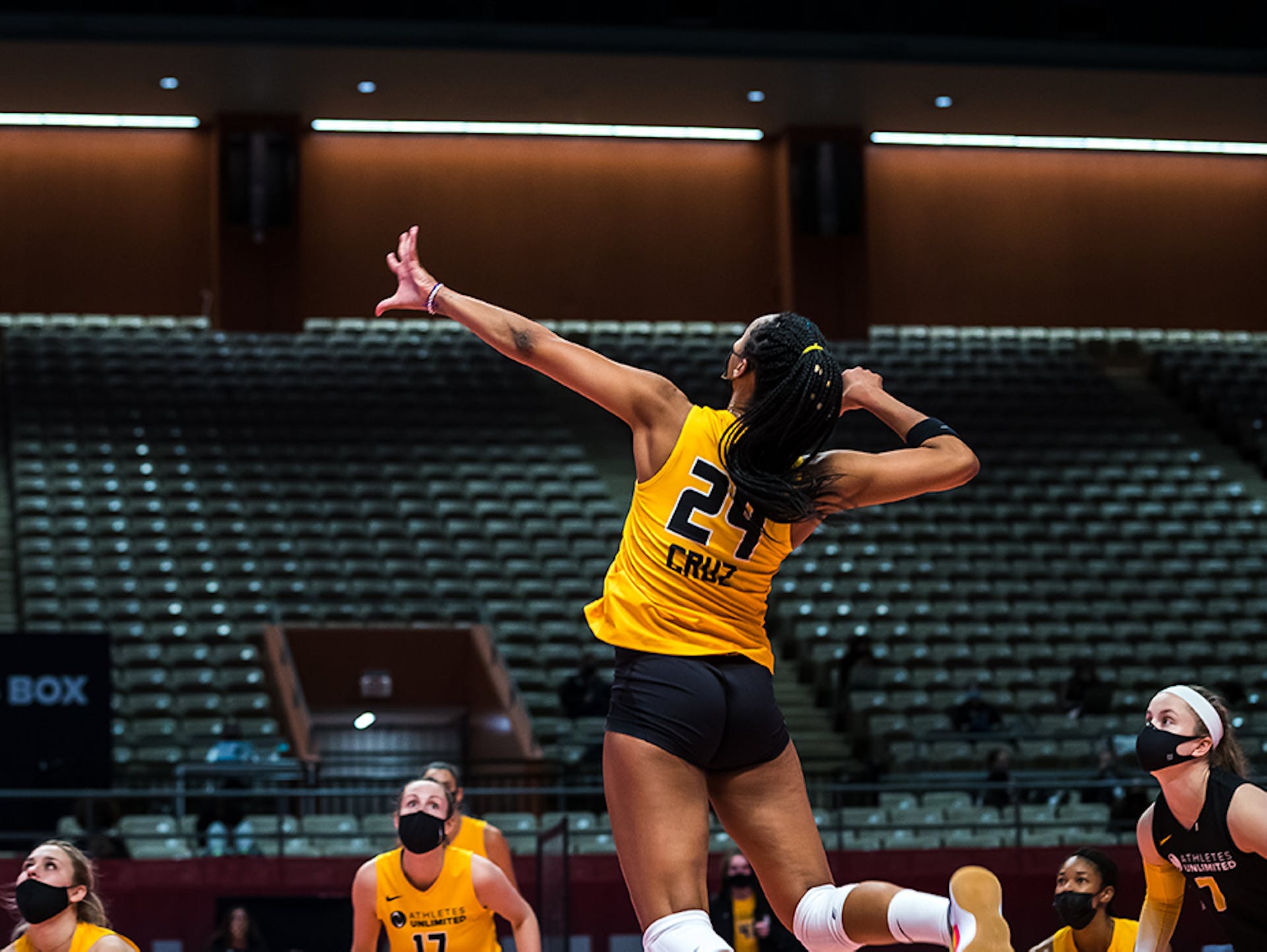 Athlete’s Unlimited’s scrimmages continued on Monday with a new set of teams and captains. The cumulative results from the weekend’s matches determine the first week’s captains for opening weekend.

Outside hitter Aury Cruz captained Team Gold again, based after leading her team to 5-1 in sets on Saturday and Sunday. The other three captains were Cruz’s past Gold teammates, libero Tiffany Clark (Orange), opposite Willow Johnson (Blue), and outside hitter Erica Wilson (Purple).

Team Clark obtained 40 points for its one set win, while Team Cruz earned 140 points for its two set wins and the larger overall point total. 60 points are attributed to the team that wins the overall match.

In Set 1, Team Clark was comfortably in control the entire time despite never having more than a four point lead. In Set 2, Team Cruz held the lead throughout and a kill from opposite Sareea Freeman ended the game. The two teams tied each other several times in the third set, but a seven-point serving run from outside hitter Holly Toliver, in which she had two aces, allowed her team to pull ahead to 14-8. Team Clark went point-for-point with Team Cruz throughout the rest of the game and was never able to close the point gap.

Although Team Cruz struggled to find their rhythm in the first set, they made adjustments as they entered the second and third sets to take the remainder of the win points up for grabs.

“Playing with a new group of players without practicing is never easy, but the communication between all the players helped,” Cruz said.

In her line-up, Cruz managed to keep setter Samantha Seliger-Swenson and middle blocker Taylor Morgan together from their alliance on Team Morgan the day before. Morgan ran a highly consistent tempo ball with Seliger-Swenson that earned her seven kills on 12 attempts for an overall hitting percentage of .583. Seliger-Swenson had 21 assists for the match.

Orange team captain Tiffany Clark finished with 14 digs, the most for anyone in the match.

Despite the loss, Clark said that she was glad she’d been picked as a captain the night before, although she’d been surprised. “Being a captain in the draft last night was a really cool experience as I was trying to figure out what I wanted the identity of the team to be,” Clark said.

Team Wilson continued their momentum in the third set and led late in the game at 16-20, but three kills from Team Johnson outside hitter Erin Fairs in a four-point span, helped her team close the gap to 19-21. Setter Valerie Nichol built on Fair’s energy with an ace and Team Johnson closed out the set 25-22 for 40 win points.

“We mostly tried to go out there and play our game,” Wilson said. “Of course, we made some slight changes based on what the other players were doing, but we were focused on being disciplined in our block and defensive positions and going from there.”

Bastianelli led the team in blocks, finishing with seven, while outside hitter Jordan Larson had two.

Bastianelli went 6-3 in sets and 2-1 in overall matches to give her 360 win points. She tallied 249 stat points and earned 100 MVP points for 709 overall and the position as Team Orange’s captain.

Despite going 1-2 yesterday, Clark benefitted from being a part of Team Cruz for the first two scrimmages, ending the weekend at 6-3 in sets and 2-1 in overall matches, for a combined 360 win points. Clark secured her place as a captain with 298 stat points and 40 MVP points for a total of 698 points.

Sybeldon also benefited as a member of Team Cruz during the first two days. Those wins, along with her wins on Team Wilson on Monday gave her a 7-1 set record on the weekend and three match wins for a total of 460 win points. Sybeldon earned 204 stat points and 20 MVP points for 684 points overall and the final captain spot.

Sybeldon will have the No. 1 pick in the first Athletes Unlimited Volleyball Weekly Draft, followed by Clark, Bastianelli, and then Cruz. Tune in on Facebook at 6 p.m. ET/5 p.m. CT.

“A blessing in disguise”: How Gina Snyder’s remarkable comeback led her to the pros