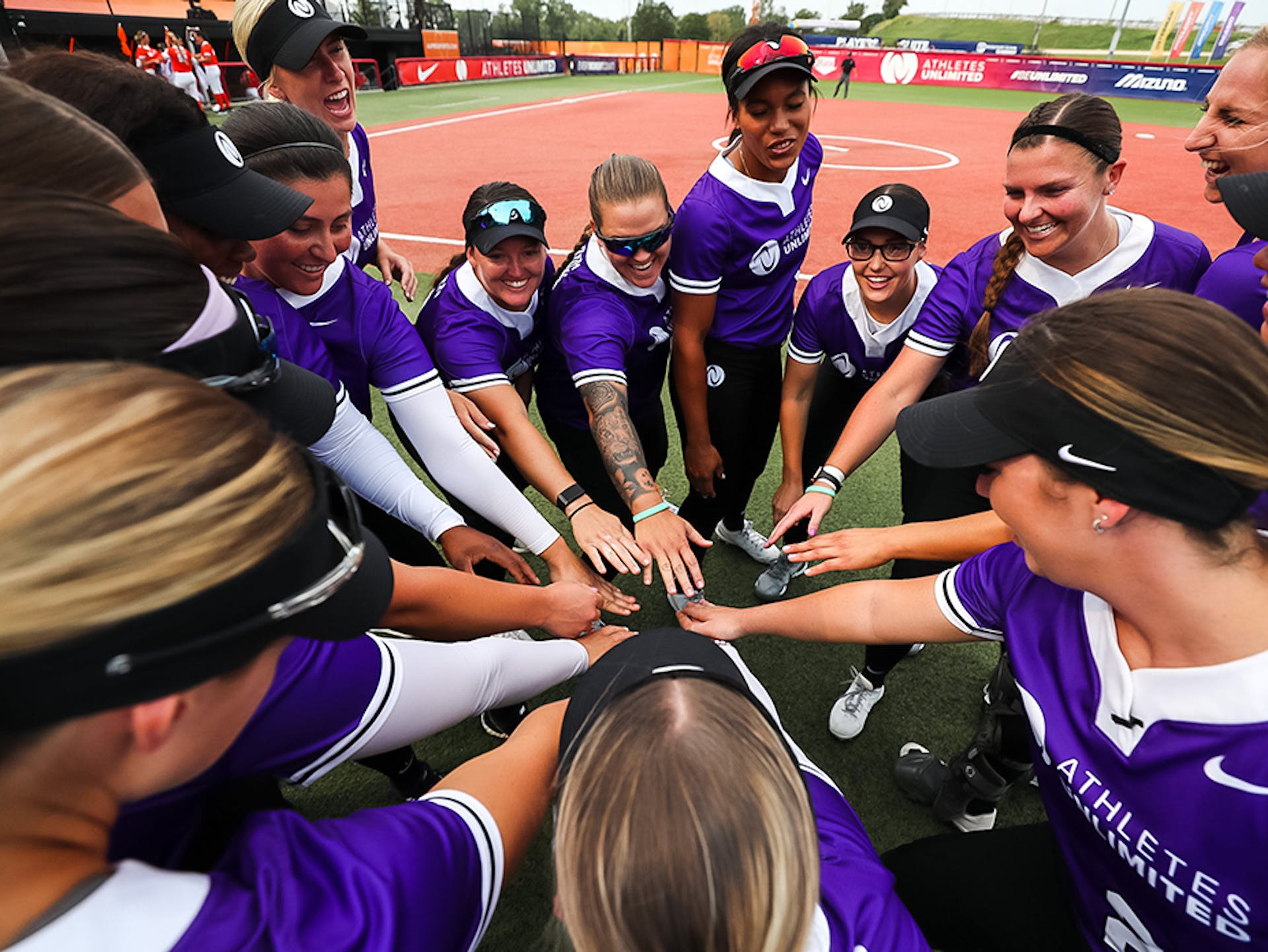 The Athletes Unlimited Softball season reached its midpoint Sunday afternoon. But there is nothing halfway about how Team Ocasio is going about its business this weekend.

Aleshia Ocasio’s Purple squad broke open a 2-1 game with seven runs in the top of the fifth inning on the way to a 9-3 victory over Team McCleney (Orange) at Parkway Bank Sports Complex.

It was the second straight day Team Purple (2-0) exploded for a big inning, and both times, Amanda Lorenz capped the uprising with a three-run homer. Ocasio’s team sent 11 batters to the plate in the fifth. Caleigh Clifton hit a two-run homer in the inning, and Anissa Urtez added a two-run triple.

The quick-strike capability is fitting for a team that has named itself of the Purple Cobras.

“Haylie Wagner (starting pitcher) actually put it in our group: the Purple Cobras,” Clifton said. “There was no question about it. We all loved it. It was perfect for us, from the movie ‘Dodgeball.’”

The Purple Cobras struck not only via the long ball, but by some small ball as well.

Team Ocasio opened the scoring in the top of the first inning against Sara Groenewegen (1-4).  Lorenz, who hit two homers Saturday, led off with a walk. After Morgan Zerkle popped out while bunting, Hannah Flippen singled to shortstop. Urtez moved the runners up on a groundout..

“I think just scoring early helps a team at any point, especially in the first inning,” said Clifton, the game’s MVP 1, good for 60 bonus points. “At that point I was just trying to string something together and poke something through, and thankfully it went through.”

Clifton’s fifth-inning homer came after Edwards singled with one out. It was Clifton’s first homer of the season. Lorenz (MVP 2 and 40 points) has three in the last two games, so Clifton was happy to join the parade.

“Seeing Amanda have so much fun, obviously I want some of that,” she said. “So that’s fun to get my first home run.”

After Lorenz homered later in the inning, Zerkle doubled, and she later came home on Urtez’s triple. Zerkle earned 20 points for the double in addition to the 10 for the single and 10 more for the stolen base in the second. She just wanted to keep the line moving in the big fifth inning.

“For sure,” she said. “And it’s tough hitting behind Amanda. Every at-bat, she has a quality at-bat. So it’s a fun challenge coming up behind her and keeping the inning rolling.”

Center fielder Haylie McCleney crashed into the wall trying to make a play on Urtez’s ball. She stayed down on the turf for a few minutes but stayed in the game.

“She makes some amazing plays, so it was tough to see for a second,” Zerkle said. “I thought she almost caught it. Good for her for going hard, but we need to keep her in the league.”

Wagner started in the circle for Team Ocasio and worked three innings, giving up seven hits and one run. Amber Fiser (1-0) got the win with two innings of relief.

Ocasio strengthened her grip on first place on the overall points leaderboard, going from 954 to 1,034. Zerkle made a jump from eighth to four, going from 766 to 886.

Abby Ramirez took home MVP 3 honors (20 points) for Team McCleney, which fell to 0-2 on the weekend.

Zerkle said she hopes the cobras will keep on showing their fangs.

“It’s pretty funny,” she said. “We always like to get excited and have a home run celebration. So to be able to do that cobra sign is pretty entertaining, I think.”