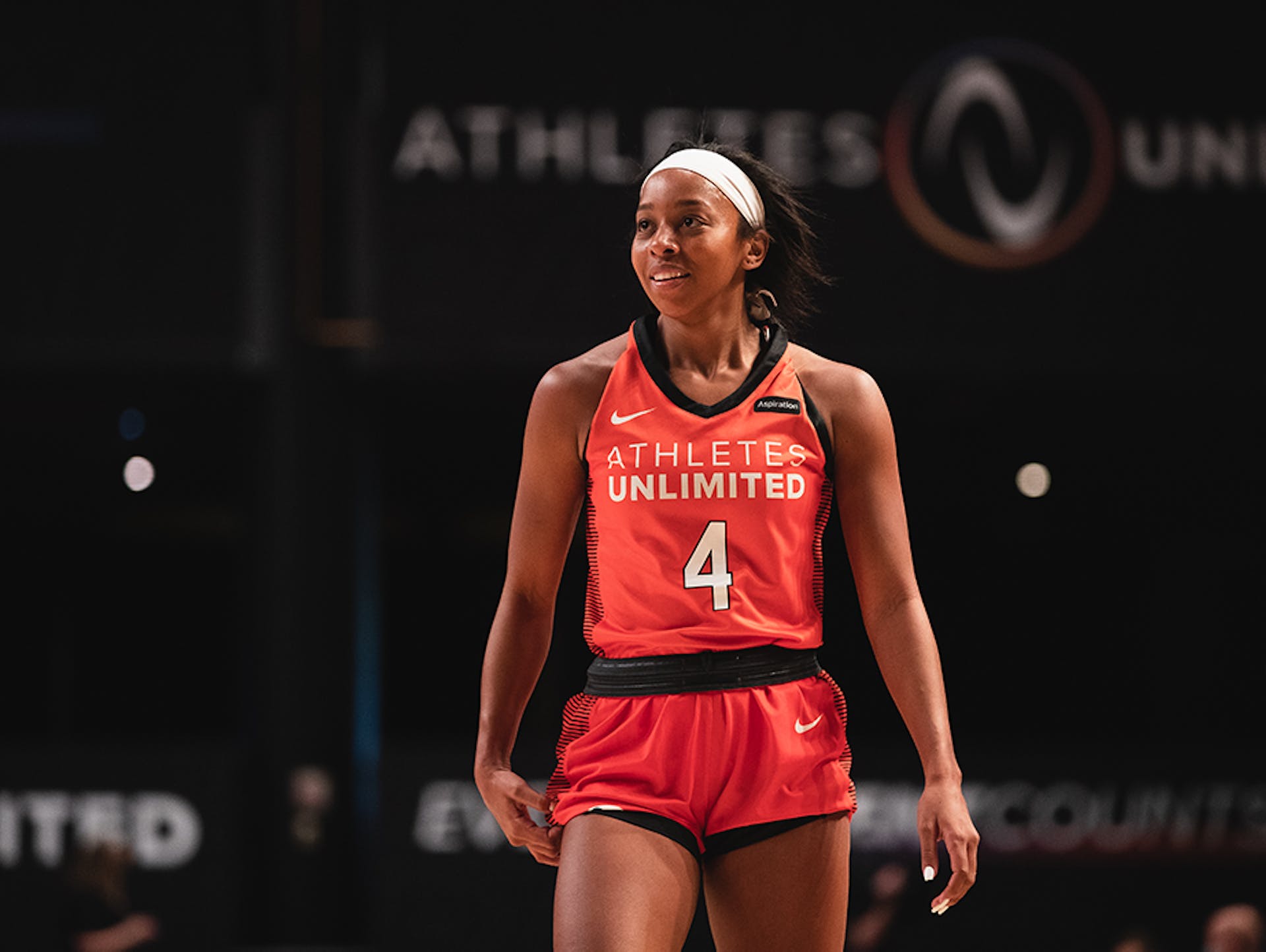 When she’s done being a pro athlete herself, Lexie Brown wants to be a pro sports general manager one day.

It’s been a long time dream of hers and everything about her experience as an Athletes Unlimited captain has solidified that. Rising to No. 2 on the leaderboard after Week 1, she’s hung out in that spot and established a few things: she and Taj Cole are one of the core Athletes Unlimited Hoops dynamic duos and she can put together a team.

She remains in orange for Week 3 (she’s yet to wear any other color) after going 3-0. We meet our captain at the draft.

It must be maddening to start all over after assembling the “perfect” team that played together less than 24 hours ago. But Brown sits in the captain’s chair at the Week 3 draft, ready to try and do it again.

“The biggest thing for me in the draft is like understanding how I want to play and knowing that there’s multiple players here that can play the way that I want to play,” Brown said. “I think the biggest thing I took away from last week is how important it is to have a high character group.  Willing to talk to each other, help each other, stick together when things get tough.”

Brown had the third pick of the draft and there was little doubt about who she was going with. For the second week in a row, she secured Taj Cole on her team first and built her squad from there.

“Essence was so amazing for me last week, which I was sick when Natasha picked her,” Brown said. “I knew she was gonna steal somebody from me, but I got my girl Lo [Lauren Manis] back.”

For Brown, there are traits that are a must for her in who she picks.

The defense proved to be there in many ways for Team Brown in their first game of the week.

They authored an Athletes Unlimited Basketball season high 16 steals versus Team Cloud on Wednesday night. The offense came out firing as well; they sprinted to an early lead putting up 30 points in the first quarter and hitting hitting 12-of-19 shots from the floor. Team

But Team Cloud was looking for vengeance after finishing out Week 2 falling to Team Brown. Momentum shifted in the third quarter. Team Cloud’s defense dominated, Brown’s offense struggled to hit shots, especially in the last four minutes of the game as things closed in. Team Brown fell 85-80 which their captain largely takes responsibility for.

“I held myself accountable for that loss – you know, not having everybody comfortable in the offense, but it was something that I wanted to try out, try some new plays.”

Thursday Practice: Scrap it and start over

Admit when you’re wrong and start over? Not easy to do.

At practice on Thursday, Team Brown worked to put in a new offense and looked like they were having a blast while doing it.

They cheered each other on while they worked on installing the sets, yelling out for teammates as if they score the game-winning shot when really they were shooting unguarded at about 70% speed. You could hear “one down” or “orange cut” echoed by 11 voices. It was hard not to smile while watching them work.

“We have a lot of heart, we have a lot of energy. They’re quick learners. Today I trashed our entire offensive package that we used and they picked up this new group of offenses so much easier, I think. I think it’s allowed them to be more free in the offense. And I think they had a lot more fun with it today. So I’m really excited to see us put it together tomorrow.”

Every captain who has been a part of this season’s Captain Journal series has talked about subbing. It’s a challenge to keep track of while they play. It’s even harder to assemble the right groups that flow or know when to give teammates a break.

Brown has struggled with subbing this week too but for an entirely different reason. She wants to give everyone minutes.

“I want to give everybody opportunity but sometimes it’s hard with the way the game is flowing. It’s so hard to find minutes for everybody. I have a different respect for coaches because it is hard to deal with something like that when you see someone working hard at practice, having a good practice [but] you just can’t find minutes for them.”

I’ve learned there are so many times in a game/practice there’s a decision to empower or degrade your team.

Brown has been on both sides of that situation: almost never coming out of a game and not playing at all. She often talked about using her experiences as an athlete to try and be the best captain possible.

Despite having a new offense, there were similarities in Team Brown’s game on Friday night compared to Wednesday. They got off to another hot start, separating themselves from Team Harrison by a 21 point margin at one time. Also like Wednesday, they stalled coming out of halftime. After shooting 44.7 percent from the field in the first half, Team Brown was limited to just 13-of-33 shooting (.394) after the intermission. In the end they came up short to Team Harrison 86-81. Another loss by just five points this week.

The opportunity to adapt

Brown isn’t used to losing at Athletes Unlimited. The losses she took this week are the first for her since Week 1.

Her teams this week have come out to great starts, showing off that she put together another team that can do exactly what she values: play defense and shoot from long range. Now they just need to find a way to finish strong.

After spending the week with Lexie Brown, there’s not doubt they’re capable. After each loss she’s spent her time hunched over notes with her facilitator, talking through how to improve, adapt.

Saturday presents her with the opportunity to do just that as a captain. They face off against Team Hawkins in the final game of the weekend at 10:30 ET / 7:30 p.m. PT on Bally Sports.

Besides, even the greatest GM’s need losses to learn from.

Every week, we’ll be following a captain as they draft their teams and plan their practices for upcoming games. Follow Savanna Collins on Twitter @savannaecollins for more insider looks at their strategies, games and more.