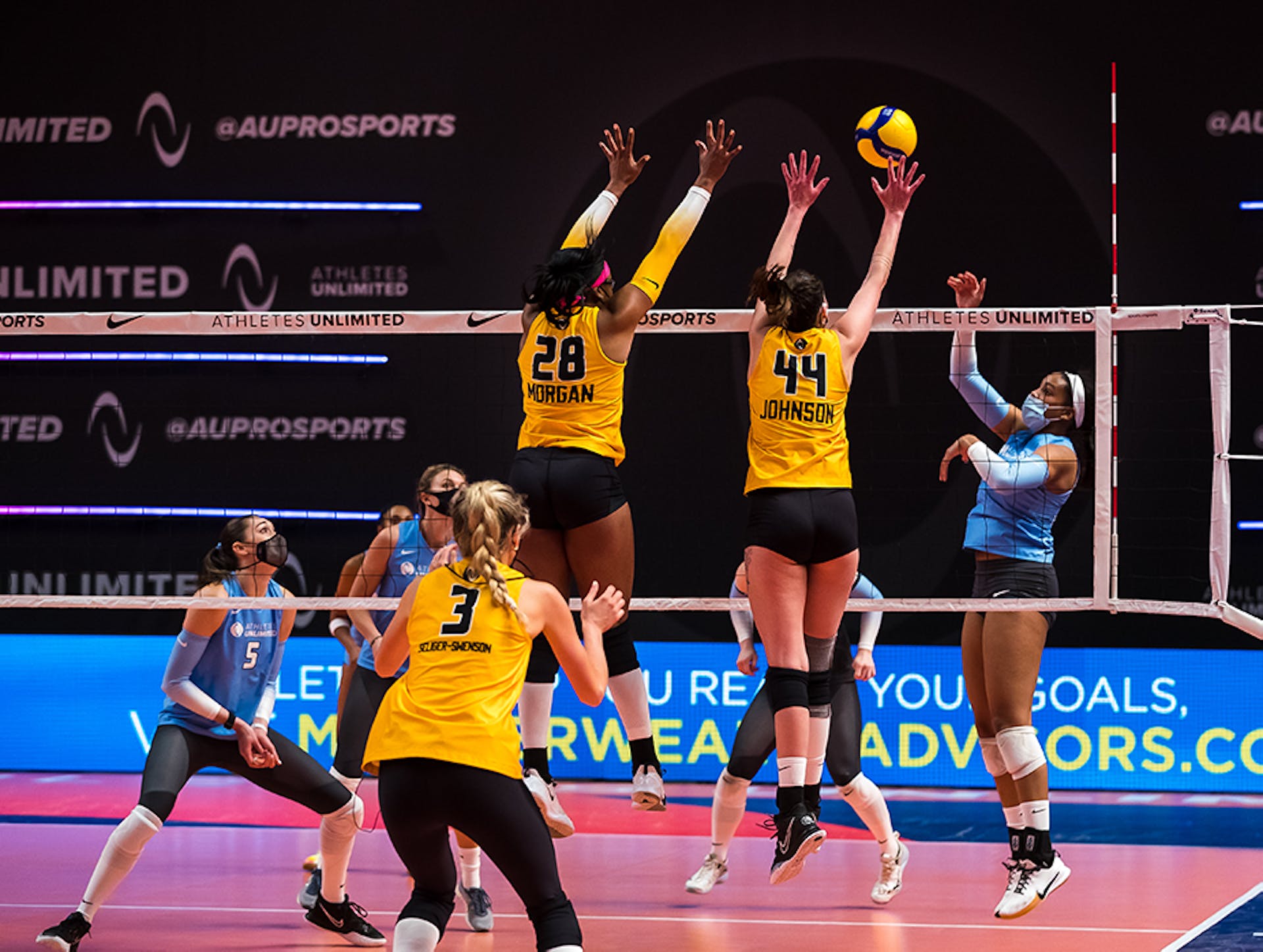 In a close match against Team Edmond, Team Larson won the overall score at 70-69, but lost two out of three sets. Opposite Willow Johnson had a stand-out performance with 19 kills on 47 attempts for a .300 attack percentage. She also had a strong defensive match with five digs and two blocks, earning her MVP 1 honors that contributed 60 points to her 292 total.

In Set 1, Team Edmond managed to build a substantial lead that put them ahead at 24-16, but were held at set point as Larson went on an 8-point serving run. Captain Jordan Larson’s aggressive serves, along with three kills and a block from Johnson, closed Team Edmond’s lead to a two-point margin. However, a kill from opposite Sherridan Atkinson ended the run and seized the set for Team Edmond at 25-22, earning each team member 40 win points.

Entering Set 2, Team Larson continued the montemum they’d built at the end of the previous game and prevented Team Edmond from ever taking a lead. Team Larson managed to close out the set at 25-19, earning 40 win points for each team member.

Both Larson and Johnson continued to put up an impressive offensive front, getting a combined nine kills. An ace from setter Samantha Seliger-Swebson and outside hitter Lindsay Stalzer also helped Team Larson maintain their lead.

Heading into the third set, Team Larson had the lead in overall win points at 47-44. Team captain and outside hitter Leah Edmond started things off with a block against Johnson. Starting strong defensively set the tone for her team.

A service error from middle blocker Taylor Sandbothe, along with a three-point serving run from outside hitter Holly Toliver, allowed Team Larson to regain their lead in cumulative points for the match at 64-63, although they were still losing the set 19-17 when Toliver’s run was ended.

Two back-to-back kills from Johnson tied her team at 20-20 and a kill from Toliver at 22-23 guaranteed her team the match win, earning each member 60 win points.

Team Edmond finished one point short in the overall match, at 69 – 70. Each team member earned 80 win points, while every member of Team Larson earned 100 win points. Larson’s serving run in the first set allowed her team to be in a position where they could manage to win the overall match.

“In that first set, we were just focused on taking one point at a time and closing that gap,” Johnson said. “In the way our league has this system, every point matters. So it was just about closing that gap. We had a timeout and it was about raising our energy level and being focused on our side, and I think we did a great job of that.”

Larson ended the match with 13 kills on 35 attempts for a .260 attack percentage and had 16 digs for 162 stat points. She also earned MVP 2 honors for another 40 points, for 302 in total. Helping both Larson and Johnson succeed was their setter, Seliger-Swenson, who had 41 assists along with 10 digs, for 123 stat points.

For Team Edmond, Molly McCage had an incredible .710 attack percentage with 10 kills on 14 attempts and no errors, earning her MVP 3 honors for 20 points, to give her 188 in total.