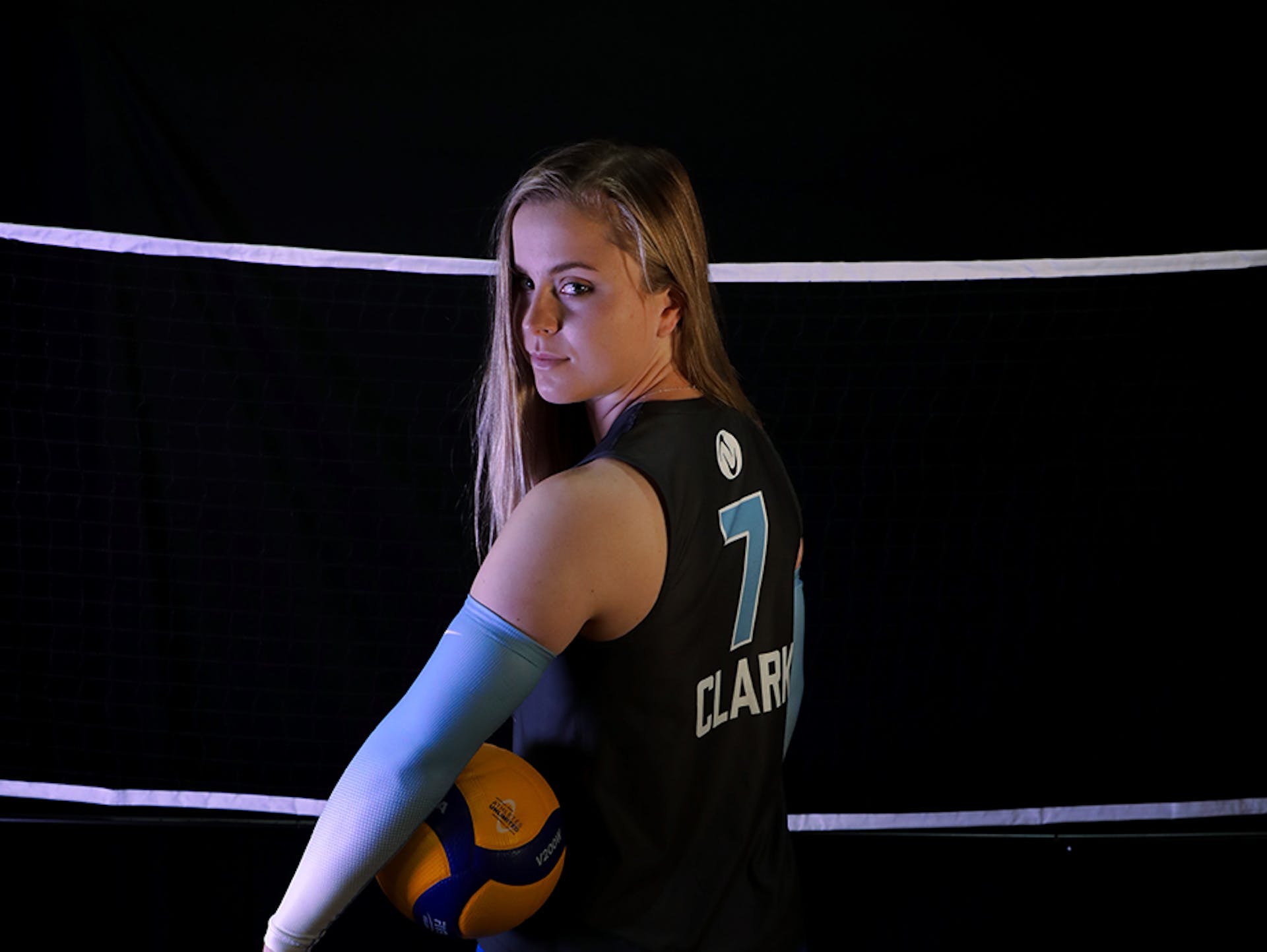 The athletes have now been practicing together for two weeks, rotating shifts so everyone would have an opportunity to play together before February 27 – the league’s official start date. Since consistent playing time between athletes has been limited, the opening scrimmages on Saturday and Sunday will have a major impact on teammate connections moving forward.

Team Morgan (Purple) and Team Cruz (Gold) both managed to find consistent connections on Saturday as each team had 3-0 sweeps.

In Team Morgan’s match against Team Handley (Orange), captain Taylor Morgan played a crucial offensive role, hitting .357 with seven kills in 14 attempts. Setter Brie King moved her set placement around and relied on different hitters for her offense, with Bethania de la Cruz, Erin Fairs, Alex Holston, and Katie Carter all having more than 17 hitting attempts. De la Cruz obtained nine kills on 20 attempts and three aces, the most aces of anyone in the match. Overall, Team Morgan hit .279 on the match.

With final scores of 19-25, 25-27, and 26-28, Team Handley never lagged far behind, but was unable to earn any win points. Team Morgan took all 180 win points for the match. Outside hitter Jordan Larson hit .300 and middle hitter Lauren Gibbemeyer hit .500, while setter and team captain Erica Handley had 28 assists. However, Team Morgan’s seven aces helped them manage to not drop a set.

“The strategy is just going to be, play our game, make changes as quickly as possible – that’s always a big thing – and communication,” Morgan said. “Very, very generic, but if we take those moving forward, it’ll really benefit us.”

For the next match of the day, although Team Cruz clinched all three sets for 180 win points, the Gold team won the first two sets by a two-point margin. After an early 4-3 lead in Set 1, Team Cruz was unable to secure the lead again until they earned the first match point at 24-23, winning the set 28-26. Setter Valarie Nichol and opposite Willow Johnson proved to be a dynamic duo, with Johnson hitting .280 on 28 attempts with 11 kills. Nichol had 17 assists for the match. Setter Taylor Bruns and libero Tiffany Clark also contributed to the team’s .216 hitting percentage with nine and six assists, respectively.

Team McCage hit .139 on the match and was led in kills by outside hitter Deja McClendon, who had 11 and hit .240 on 25 attempts. Nomaris Vélez Agosto led the match in digs, with 15.

In Athletes Unlimited’s league, even if a team wins more sets, they could lose the overall match if their opponent has a higher point margin.

Team Handley hit .160 on the match with Team McCage putting up a slightly better percentage at .162.

Larson had another impressive match, earning 8 kills, 11 digs, and 4 aces – the most on her team for each category. One of Larson’s aces came on match point of the first set, and she continued her serving momentum into the second set, getting aces on the first two points.

Setter Kaylee Manns had 30 assists throughout the match, finding seven of them with middle blocker Cori Crocker on just 10 attempts. Crocker also had four blocks, the most of the match.

On Team McCage, middle blocker Nia Grant helped her team on the defensive front with three blocks. McCage herself connected well with setter Kelly Hunter, hitting .571 with four kills on seven attempts. Hunter put up 32 assists on the day with seven digs.

The next match also went 2-1, with Team Cruz coming out on top for 140 win points.

In the first game, setter Samantha Seliger-Swenson played a crucial role in closing out the set by going on a six point serving run, where she earned two aces. Her team had been trailing 19-20 when she began serving.

Yet, Team Cruz was able to build a significant lead early on in the second set, leading 14-5. After that, Team Morgan managed to go point-for-point with Team Cruz, but could never gain ground, losing the set 17-25. The third set was much closer at 25-22, with Johnson earning a kill to end the match.

With a 5-1 record, Team Cruz led the weekend in the number of sets won, and tallied 320 win points across the two days.

After Sunday’s matches, another draft was held to determine the teams for Monday’s games, with Cruz being selected as the captain for Team Gold again.

Cruz’s aspirations to keep her original line-up together were quickly dashed when three members of Team Gold took the remaining captain slots.

For Monday’s scrimmages, Tiffany Clark will lead Team Orange, Willow Johnson will be the head of Team Blue, and Erica Wilson will be at the helm for Team Purple.

Wilson had the No. 1 pick, selecting two-time Olympian Jordan Larson. Johnson selected setter Valerie Nichol, who she’d clearly had chemistry with on the court throughout the weekend. Clark chose outside hitter Bethania de la Cruz – the Olympian from the Dominican Republic – as her first pick. Cruz had the last pick of the first round and chose setter Samantha Seliger-Swenson, who she’d faced on the opposite side of the net earlier in the day.

As the dust from the draft settled, Cruz didn’t have a single original teammate from the prior two days as a part of her line-up. With a completely new team, Monday’s scrimmage will reveal if Cruz can manage another win.

The four players who finish with the most individual points will become the team captains for Athletes Unlimited’s first week of opening matches.

Kylie Ohlmiller: How I made my high school yearbook quote a reality