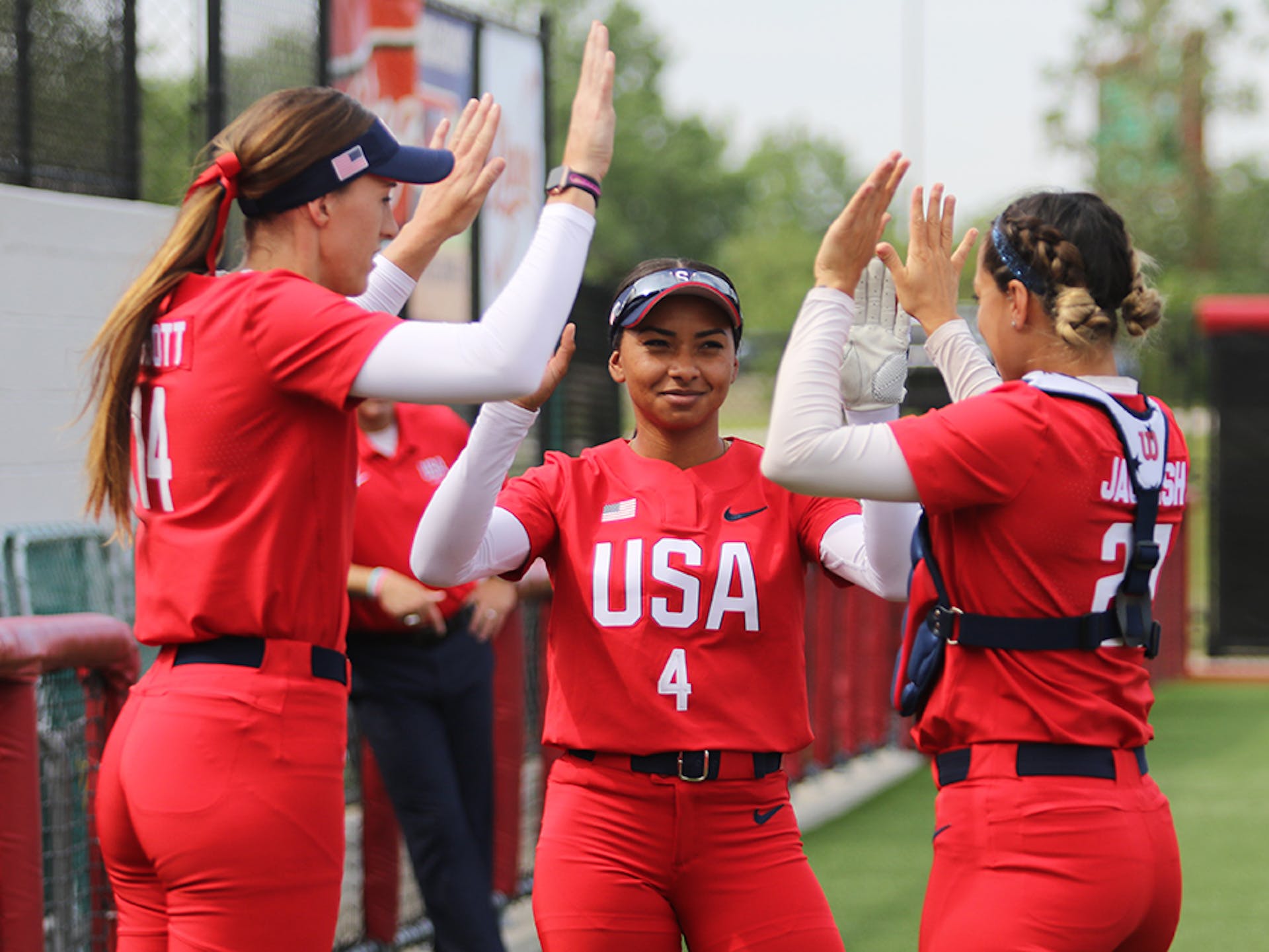 Shut up and dribble. Stay in your lane.

The dismissive comments aimed at athletes are constant and they are no different than those levied at rappers in 1990. That sparked the formation of Rock the Vote and its first campaign, “Censorship is Un-American.”

Swap out microphones for basketballs and it still fits.

“This very much continues to hold true today, particularly in the sports world,” said Carolyn DeWitt, president and executive director of Rock the Vote, on a phone call with Yahoo Sports, “that a lot of athletes are belittled and told that they are just athletes and that they should be quiet and not use their platforms to create change, or use it to express their lived experiences, stories and beliefs.”

The WNBA partnered with the organization in 2018 for midterm elections to urge young people to register and be heard. And earlier this summer the WNBA Players Association announced DeWitt as an adviser to the newly developed social justice council. One of the main focuses is still voting and the players have repeatedly shown they refuse to be censored.

“The players are inspiring,” DeWitt said. “They very much feel the onus of this moment and they feel the importance of not just this moment, but in the moment in history that we are in. And they recognize the leverage that they have of their platforms.”

The moment is striking. The killing of George Floyd when a police officer held a knee to his neck for nearly nine minutes prompted a national reckoning on race. The COVID-19 pandemic has laid bare equity gaps. And then there’s the 100th anniversary of the ratification of the 19th Amendment on Tuesday.

Their efforts on the issue of voting honors the 19th Amendment, but also continues its unfinished work. And other leagues are taking note.

Candace Parker is a student of history and knows that education and voting are paramount. The Los Angeles Sparks star is part of the organization’s Change Has No Offseason social justice program that is focused on voting.

The time and energy that went into the passage and ratification of the 19th Amendment should be recognized, she said, but it has to be noted that it didn’t grant everyone the right.

“I think it is a good measuring stick of where women have come in this country,” Parker told Yahoo Sports. “[But] it wouldn’t be until years and year later, 40 years later, that I myself at that time could vote.”

DeWitt makes sure to call such moments a “marking or commemoration, but definitely not a celebration,” she said. The ratification is part of a larger story on gaining voting rights for the majority of Americans. It prohibited states and the federal government from denying women the right to vote based on sex, but there remained other disenfranchising laws on the books.

Chinese Americans were excluded until 1943 and Native Americans until 1952. The 24th Amendment abolished poll taxes in 1964 and the Voting Rights Act of 1965 prohibited racial discrimination. There are still hurdles that act like poll taxes and the 1965 act needed two amendments in 1970 and ’75.

Then, with Shelby County v Holder in 2013 and ensuing Supreme Court rulings, it was scaled back with detrimental effect to Black and Brown citizens. States can, and many have, enacted voter ID laws, rolled back early voting availability and purged voter registration lists more broadly.

“I definitely understand how empowering it is when you see individuals fight for what they believe is right,” Parker said. “We always talk about being on the right side of history and in 100 years, what would those people say with different values? And we’ve seen how much times have changed in even five years, from [controversy over] kneeling during the national anthem to Black Lives Matter on everybody’s chest while warming up. Time changes, but what’s right I don’t think does.”

Fighting back with the ‘voting playbook’

DeWitt shares with WNBA players the “voting playbook” and goes over the key issues, steps to voting, who and what are on ballots and how to help others follow suit.

Players are showing up to games in “VOTE” face masks and sharing those photos widely. They are proactively involved in local elections in their hometowns and college towns, going to DeWitt mostly for help with the framework or how to navigate a particular issue.

Their investment has only increased since 2018 and DeWitt said she’s honored to advise a group with such power and leadership.

“They were really the trailblazers when it comes to using their platforms and really trying to shine a light on voting as one of the most powerful tools that you have to make change,” she said.

The most notable moment for the league was when players showed up to the arena in “Vote Warnock” T-shirts, taking a stance against Atlanta Dream co-owner Kelly Loeffler after her anti-Black Lives Matter stance. The Rock the Vote crew saw it unfold just as the rest of the nation did; DeWitt called it the “beauty of our democracy” that they used their platforms to highlight an issue of importance to them.

DeWitt said she hopes and expects the league to continue being trailblazers in their “open and bold” efforts to show the importance of voting. And she doesn’t see it stopping after the 2020 election because it’s bigger than that.

“What I see happening is the WNBPA and players continuing the work that they have done,” DeWitt said, “and digging into it even more and using their platforms to reach even more fans, to reach other players across different leagues and different teams and different sports.”

Fellow leagues have started by focusing on the cause before even throwing a pitch.

Jazmyn Jackson is in the racial equality working group for Athletes Unlimited, which will launch its softball league near Chicago on Aug. 30. She is always willing to talk about voting and said she views the passage of the 19th Amendment more of a “duh” moment.

It “didn’t really affect me,” said Jackson, whose mother is Mexican-American and father is Black.

Addressing social justice issues was important to the Athletes Unlimited group and an aspect Victoria Hayward, a league executive committee member, was excited about. The group also joined Rally the Vote with teams from the NBA, NFL, MLB, MLS and NWSL.

“I think our age group [millennials] we talk about as kind of the people who can change the landscape [because] there are huge numbers,” Hayward said in a phone call with Yahoo Sports. “We have these really forward-thinking ideas and those ideas matter when they’re put to a ballot. And not only in a national election, but in local elections and on every level.”

The 28-year-old Canadian became a U.S. citizen last year and is excited to participate in her first election. Jackson is heading into her second presidential decision after first voting in 2016.

“Obviously it’s important for me to vote, but I am one voice,” said Jackson, a Team USA outfielder. “So instead of saying, ‘I’m one voice, it doesn’t matter,’ it’s more like ‘I’m one voice it matters so much I need to get other people to vote.”

The 2016 election along with her upbringing in San Jose, California, has framed how she approaches voting now. While at UC Berkeley she took a justice and ethics class that required students analyze the Donald Trump presidency purely through the administration’s policies.

These conversations didn’t happen before the 19th Amendment. For many, they still don’t happen. Those who have had it easier recognize they can’t leave others behind like certain leaders in the fight for women’s suffrage.

“I think for me it’s about making sure that we’re consistent with what we’re fighting for. And that’s equality,” Parker said. “That doesn’t just mean my equality [and] your equality. It’s everybody’s equality.”

Women athletes will continue the work that wasn’t completed 100 years ago, following in the footsteps of Matilda Joslyn Gage, Sojourner Truth, Frances Ellen Watkins Harper and Ida B. Wells. The 19th Amendment is a highlight in the long voting game. It was progress, but there hasn’t been a final buzzer yet.