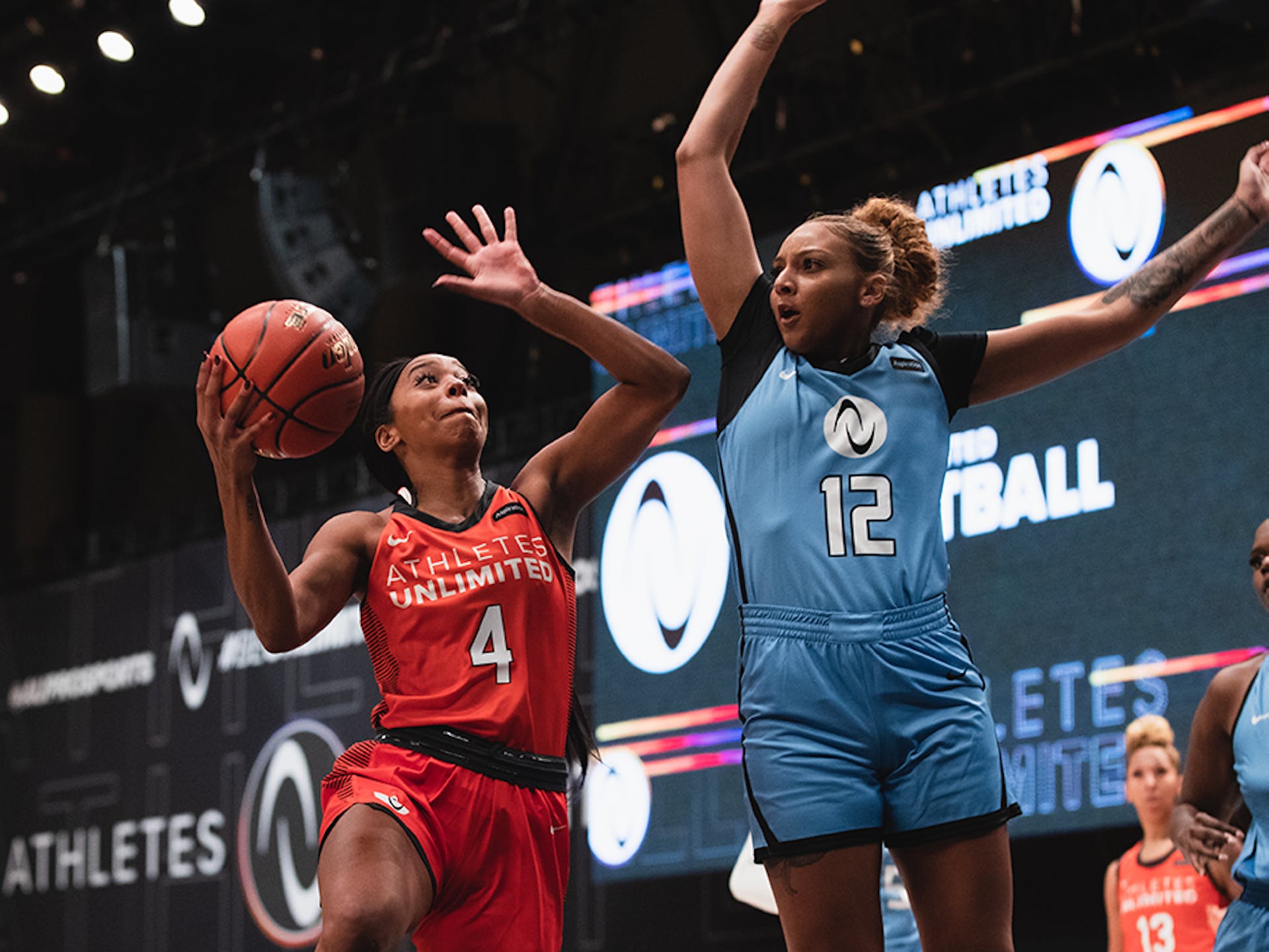 LAS VEGAS — The dynamic duo of Lexie Brown and Taj Cole has been together the first two weeks of Athletes Unlimited Basketball, won five of the six games – including a 3-0 showing in Week 2 – and are back together for Week 3.

Brown made Cole her No. 1 choice Sunday in the draft, and for the second week in a row surrounded herself with a slew of sharpshooters, just as she did in Week 2.

There’s no doubt Team Brown, which will wear Orange again, will have confidence, as eight of her 11-woman roster rank in the Top 25 on the individual leaderboard. And of the 16 players who have played a minimum of five games and are averaging double figures in scoring, Team Brown has four of them: Cole (15.8), Brown (14.7), Jantel Lavender (12.0) and MeMe Jackson (12.0).

Another duo back together and looking for redemption after back-to-back losses to close out Week 2 is captain Natasha Cloud and DiJonai Carrington, who have played the first two weeks of the regular season together. They’ll once again be joined by Kalani Brown, and while Cloud didn’t get “O.G. veteran” Ty Young, she did grab Essence Carson, a veteran whose offense has been outstanding with 12.5 points per game on .508 shooting from the field.

Cloud, Carrington, Carson and Brown are averaging a combined 67.8 points per contest.

Cloud filled out her Week 3 roster with: Kiki Harrigan, Drew Edelman, Laurin Mincy, CC Andrews, Shannon McCallum and Tiny Roy. She also added Kelsey Mitchell in the seventh round. However, Mitchell will miss all Week 3 games after being named to Team USA for the FIBA World Cup Qualifying Tournament.

Isabelle Harrison, also 5-1 this season, was the third returning captain along with Brown and Cloud. Harrison, who leads the league with five MVP selections and 300 MVP points, will be reunited with four players from her Week 2 roster: Courtney Williams, Kirby Burkholder, Toccara Ross and Odyssey Sims.

Harrison nabbed a couple of steals of her own, as Sixth Woman of the Year candidate Ty Young slipped through the cracks long enough to join this troop, while Nikki Greene will patrol the paint. Both come in averaging identical numbers of 7.8 points and 4.7 rebounds per game.

The newcomer to the captain ranks is Tianna Hawkins, who shot the lights out on Friday and Saturday, scoring 38 and 46 points, respectively. Hawkins leads the league with 25.2 points per game and is grabbing 8.2 rebounds per contest.

With her first two picks Hawkins solidified her point-guard spot and center position, taking veteran Sydney Colson and former captain Mercedes Russell, who mentioned after her team went 0-3 in Week 2 that she was looking forward to getting back to player-only status.

“I wouldn’t mind if I had a break this week,” Russell said, “and change to a player perspective.”

Hawkins may have put together a sneaky-good, sleeper squad with players who have come up big in their respective roles, making big timely shots at different times.

For instance, Destinee Walker has the most points scored (18) in one quarter this season, Jessica Kuster has quietly been effective in the paint at times while hitting .444 from 3-point range at others, Rebecca Harris is averaging 11.5 ppg., and Air Hearn can fire from 3-point range at any time.

Week 3 wraps up Saturday starting at 4 p.m. PT (7 p.m. ET) with Team Harrison vs. Team Cloud and will close the week with Team Brown vs. Team Hawkins.