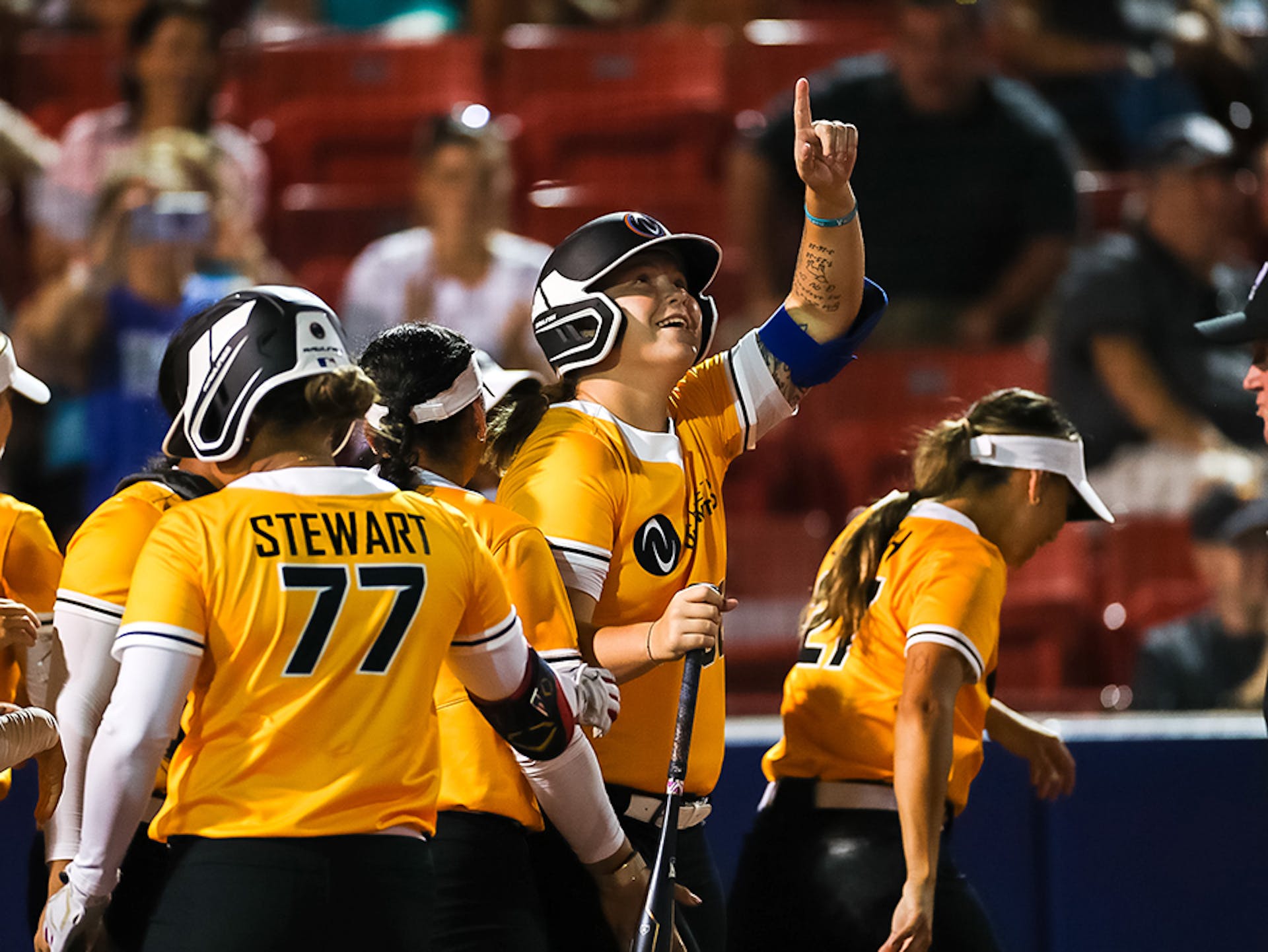 It would be hard to describe the first weekend of Athletes Unlimited as anything but a perfect 10.

First, there were fans, and lots of them, in the stands at the Parkway Bank Sports Complex, and they made a lot of noise.

There was a no-hitter. There were plenty of home runs. And fielders laid out all over the place to make outstanding defensive plays.

Team Osterman put a capper on the proceedings with a 10-run third inning that broke open a 2-1 game and sent Cat Osterman’s Gold team to a 15-2 victory over Team Warren (Orange) in the Week 1 finale on a perfect Monday night for softball.

Osterman’s team finished the first week with a 3-0 record.

There’s one way to break up the band, and it’s a good way. All four captains for Week 2 play will come from Team Osterman based on points earned over the just concluded weekend.

Sahvanna Jaquish had two singles, a home run and a walk Monday, and she added 20 more points for being MVP 3 of the game. She finished the weekend with 498 points. Osterman finished second with 490. She was followed by teammates Tori Vidales (468) and Lilli Piper (438), a returning Athletes Unlimited veteran who went from having to try out again in June to being a captain for Tuesday’s Week 2 draft.

“It gives everyone a chance, and I absolutely love that,” said Piper, who gained 60 bonus points for being named MVP 1 of the game to go along with 50 for the team win and 70 for her team winning innings. “Obviously being a DH this weekend and trying to do my thing, but going to that tryout was awesome, and they did a great job with it. I knew I had to go back and show my stuff again. That’s what I did, and I’m just happy to be back here playing the game.”

Jaquish will captain the Gold team next week, but she did sound a wistful note about having so many players from the team having to go their separate ways for Week 2.

“That’s unfortunate because our team chemistry is just so together,” she said. “We had a lot of fun with this team, but I’m excited to see what next week is going to look like.”

Things began well enough for Team Warren when Amanda Chidester led off the top of the second inning with her second home run of the season, a high drive to left field.

Team Osterman picked up a pair of two-out runs in the bottom half of the inning. After Jessica Burroughs struck out the first two batters she faced, Michelle Moultrie hustled for a double to right field. Piper then crushed a homer to center to give Team Osterman a 2-1 lead.

The 10-run third inning, mostly against reliever Danielle O’Toole, featured a three-run triple by Dejah Mulipola, a two-run double by Haylie McCleney and a two-run homer by Jaquish, who also singled twice and walked once.

“Every time I’m in the box I want to help my team in any way I can,” Jaquish said. “Definitely a pass-the-bat mentality. I was bunting when I think we were up by 12 runs at one point. In a normal game, you would never see that. But here at Athletes Unlimited, every inning matters.”

It was only the second 10-run inning in Athletes Unlimited history. The other came in the first game of the 2020 season.

Both McCleney and Jaquish starred defensively as well. McCleney, last season’s GEICO Defensive Player of the Year in Athletes Unlimited, made one diving catch and kept a hit from getting to the wall. Jaquish, at third base, charged in and threw out the speedy Jazmyn Jackson at first base. McCleney won MVP 2 honors and 40 extra points.

Rookie Mulipola has witnessed a lot her first weekend. She caught Osterman’s no-hitter Sunday and was in the middle of things Monday.

“The girls are awesome,” she said. “The pitchers are awesome. They’re easy to work with. I’m sad that we’re going to be breaking up after this week.

Katrina Adams: How to Own 'Your' Arena, when you're the 'ONLY' one