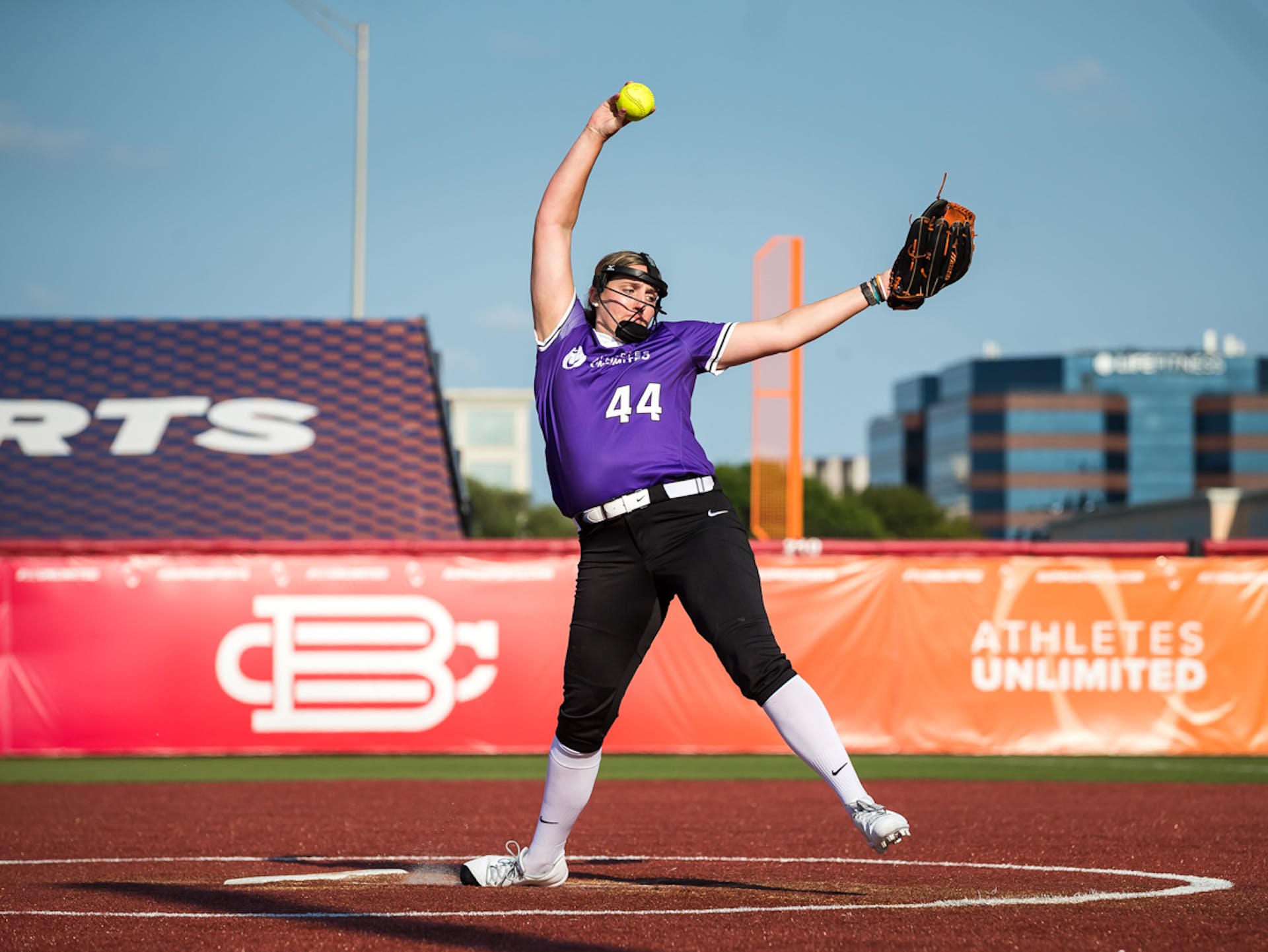 Going into her fifth and final season of college softball last year, Carrie Eberle had one goal: to play in the Women’s College World Series.

Eberle, a right-handed pitcher from Oklahoma State University (OSU), is a member of the standout rookie class making their professional debuts with Athletes Unlimited this season. She was one of the top pitchers in the nation during her collegiate career, playing three years at Virginia Polytechnic Institute (Virginia Tech) before transferring to OSU.

Being raised by two Virginia Tech alumni, the Hokies were the clear favorite when she was choosing a school.

“Growing up, Virginia Tech was always kind of my dream school,” she said. “I grew up going there for football games and other things on campus. I had a couple of aunts and uncles and cousins who went there, and both my parents, so that was always the goal… once I got an offer from them that’s definitely where I wanted to go.”

Eberle was a star at Virginia Tech, and her final season playing for the Hokies culminated in an ACC Pitcher of the Year honor. After finishing her undergrad in three years, Eberle decided to pursue a master’s degree and continue playing college softball. With the success she’d had on the field at Virginia Tech, the safe option would have been to stay at the same school – why risk switching to a different program, a different coaching staff and different teammates when you’ve just been named the best pitcher in your conference?

“It was the biggest risk I could have taken,” Eberle said. “I knew exactly what I was going to get from Virginia Tech, playing time-wise and all that, and I didn’t really know what caliber [team] would want me if I went into the transfer portal.”

The answer lies in Eberle’s other college accolades. When one looks beyond her ACC Pitcher of the Year title, they’ll find an abundance of academic honors: ACC Academic Honor Roll, VaSID All-State Academic Team, CoSIDA Academic All-District and ACC Softball Scholar-Athlete of the Year.

While Eberle was a standout on the pitcher’s mound at Virginia Tech, she has always prioritized her studies. For this reason, finding the right master’s program was just as important as finding the right softball program.

“I specifically wanted to do forensic science, and they didn’t have that [master’s program] at Virginia Tech. So when I did decide to transfer, that was one of the main things I was looking for in schools: high quality softball programs that had that master’s opportunity. It was definitely a risk, but I felt like I had kind of grown as much as I could at Virginia Tech and was ready for a fresh start. I wanted to experience new people, a new town and have the opportunity to go to the Women’s College World Series,” she said.

Eberle’s decision to transfer was full of unknowns, but her risk paid off. She found a new home at Oklahoma State University (OSU), a school with both a master’s program in forensic science and a high-caliber softball program that could take her to her first Women’s College World Series.

“The environment at OSU was so family-oriented and welcoming,” she said. “The coaching staff and the players allow you to be yourself, and you never feel the pressure of having to perform well day in and day out. It’s about having fun and being the best you can be, and that was the freeness that I was looking for.”

If there were any doubts about whether Eberle could continue her dominance in the circle against Big 12 teams, she quickly put them to rest. In her debut season with the Cowgirls (shortened due to COVID-19), she led the Big 12 and ranked fourth nationally with a 0.46 ERA in 76.0 innings pitched.

With one final season of eligibility in 2021, Eberle was determined to achieve her long-time goal of playing in the Women’s College World Series. After going through the process of transferring and then having the 2020 season cut short, she was more than ready to get back on the field and give her team everything she had.

Bringing OSU to its best conference win percentage (.833) in Big 12 history, she posted a 1.06 ERA and led the Big 12 in wins (19), shutouts (6) and complete games (15). She became OSU’s first-ever Big 12 Pitcher of the Year, making her a two-time honoree across two different DI conferences.

Eberle’s success continued through a thrilling postseason run, headlined by a heroic performance in the win-or-go-home third game of the NCAA Stillwater Super Regional against the University of Texas. With a trip to the Women’s College World Series on the line, Eberle pitched a complete-game shutout to take down the Longhorns.

“I never pictured myself getting there at the start of my college career,” she said. “My freshman year I was on a team that won 19 games, and then five years later I’m standing on the biggest stage in college softball.”

Eberle won the first game of the tournament 3-2 over the University of Georgia, after an early pitcher’s duel against Mary Wilson Avant, but fell to fellow Athletes Unlimited newcomer Odicci Alexander when the Cowgirls faced James Madison University. OSU’s subsequent loss to Florida State University ended Eberle’s Women’s College World Series run, but she looks back fondly on her team’s resilience throughout the tournament.

“Obviously we would have loved to have gone further, but it’s just a really proud thing to be a part of… to bring back the rich tradition at OSU and bring it back to the standard that it should be at year in and year out. I wish my college career didn’t end at 2:00 a.m. because they decided to start a game at midnight, but it was an amazing experience.”

When asked who she’s most excited to play with in Athletes Unlimited, Eberle’s answer was automatic: Sis Bates, the star out of the University of Washington.

“I’m a ground ball pitcher, so I love me a good shortstop any day of the week,” Eberle said.

Competing against seasoned veterans may be a tough adjustment from the collegiate level, but Eberle is up to the challenge. If her college career tells us anything, it’s that she doesn’t shy away from change – she revels in it.

“I think [the key] is just going to be staying mentally tough, being surrounded by such amazing talent and people that you grew up watching,” she said. “Now I’m going to be the newbie, so I just need to keep the confidence and believe in myself. Knowing that I was given this opportunity for a reason, I just want to make the most of it because a lot of girls don’t get this opportunity.”