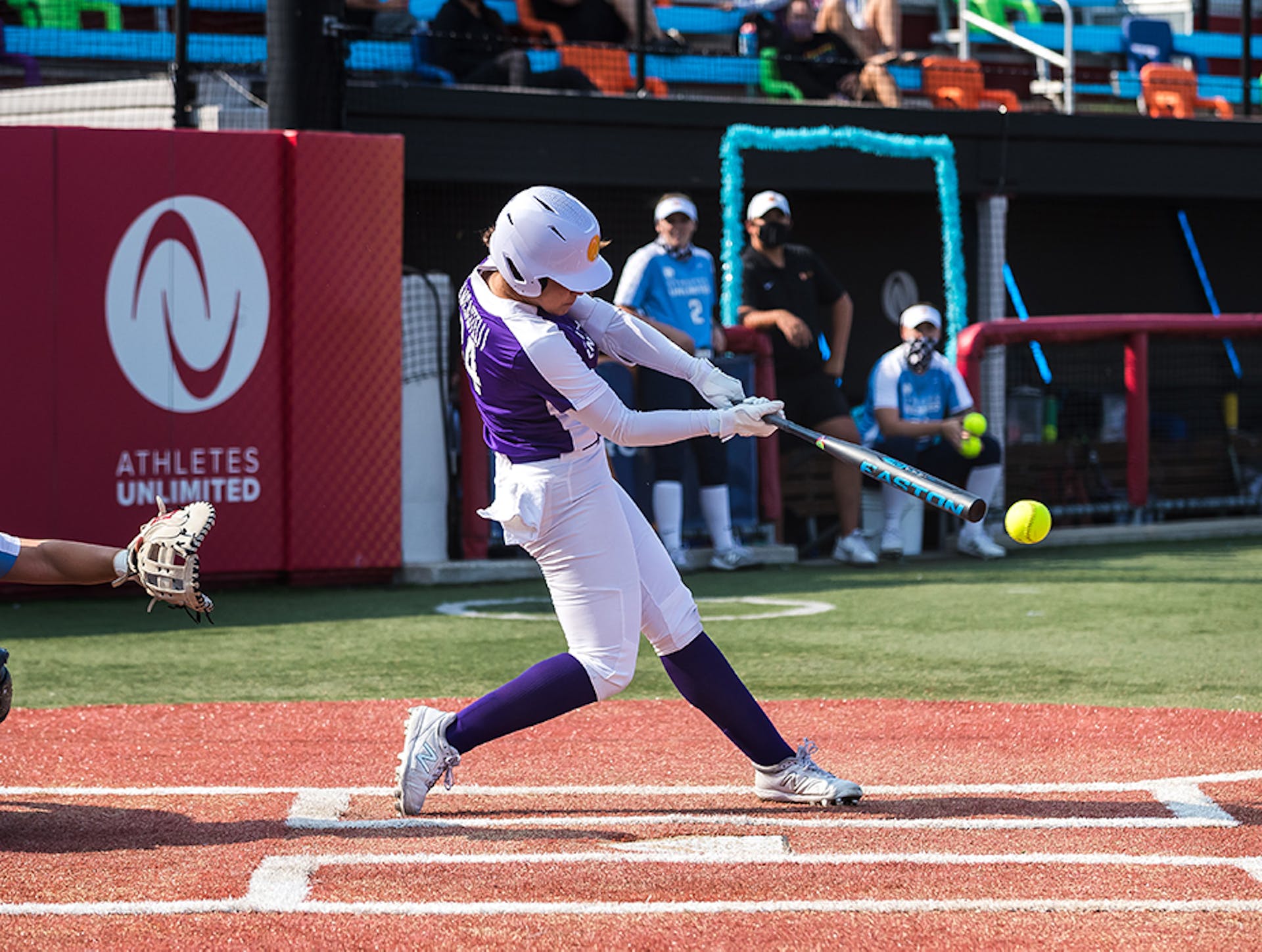 A looser bunch of ballplayers you would not find than Team Warren before a late-afternoon clash with Team Hayward to kick off a big Monday of Athletes Unlimited softball.

Players hung out in front of the first-base dugout and danced, posed for the camera and generally enjoyed life.

Things may have gotten just a bit tighter in the late innings, but Jessie Warren’s Purple squad managed to hold off a pair of threats by Team Hayward and post a 7-5 victory. Lefty Taylor McQuillin came on with a two runners on base in the bottom of the seventh and recorded three outs for the save – the last two on strikeouts – as Team Warren overcame a throwing error that allowed one run to score.

As things shook out on this sunny and warm pre-autumnal day, Team Warren went 3-0 for the weekend while Team Hayward wound up 2-1.

Even if it did mean Piancastelli was left talking to herself after hitting baserunner Emily Crane with an errant throw and allowing Crane to score.

“Oh, yeah,” she said. “Just trying to stay focused and not think about those plays too much. But yeah, it was part of the game. You always have to move on to the next play and be ready.”

Piancastelli was involved in much good for team Warren. She hit her sixth home run of the season in a two-run fifth inning and doubled in the seventh, giving her 60 stat points in addition to the 100 she earned for her team winning innings and the game.

To top it off, she was named MVP 1 of the game, bumping her overall points total to 1,510, putting her third in the race for one of the four captains’ spots pending the outcome of Monday night’s game.

Team Warren got its offense going early against starting pitcher Kelly Barnhill, who got the nod ahead of Haylie Wagner. An RBI groundout scored a run in the top of the first, and Team Warren got two in the second. Nadia Taylor doubled but was out at third trying to stretch it into a triple. Shelby Pendley followed with a double and scored on Aleshia Ocasio’s triple. Ocasio came home on Kelsey Jenkins’ sacrifice fly.

There seemed to be a few eyebrows raised all around Parkway Bank Sports Complex with the start of Barnhill over Wagner. Barnhill pitched well over 5.2 innings Sunday. She did give way after two innings to Wagner, who finished the game for her team.

“I think I was surprised that she wasn’t starting because she has been so hot lately,” Pendley said. “But I think they wanted to go with a different look, see if they could get some innings out of Barnhill, and we took advantage of that.”

Team Hayward got a two-run homer from MVP 3 Haylie McCleney in the third and a solo shot from Lilli Piper in the fourth. Hayward’s Blue Team left the bases loaded in a one-run sixth before coming close in the bottom of the seventh.

Ocasio pitched four innings, giving up six hits and three earned runs. She also added two singles to her triple, and was named MVP 2 for an additional 40 points. Heading into the nightcap, she was fourth overall in the points standings with 1,508.

“I don’t really watch the rankings to a T as people might think,” Ocasio said. “Being in the top four is a huge accomplishment itself. I’m rooting for people to do great and doing that I’m not trying to put anybody down so that I can be in top four. I want everybody to put their best foot forward and compete.

“There’s [57] of the best players in the world here at AU. So to be part of a team that went 3-0 this weekend is super special. I was extremely excited to come back and play. Me and Jessie played together growing up and played together on the Pride. We know each other where we have a comfort level. She trusted in picking me No. 1 to pitch for the team and play wherever she needs me. It meant the world. I’m proud to be on this team.”