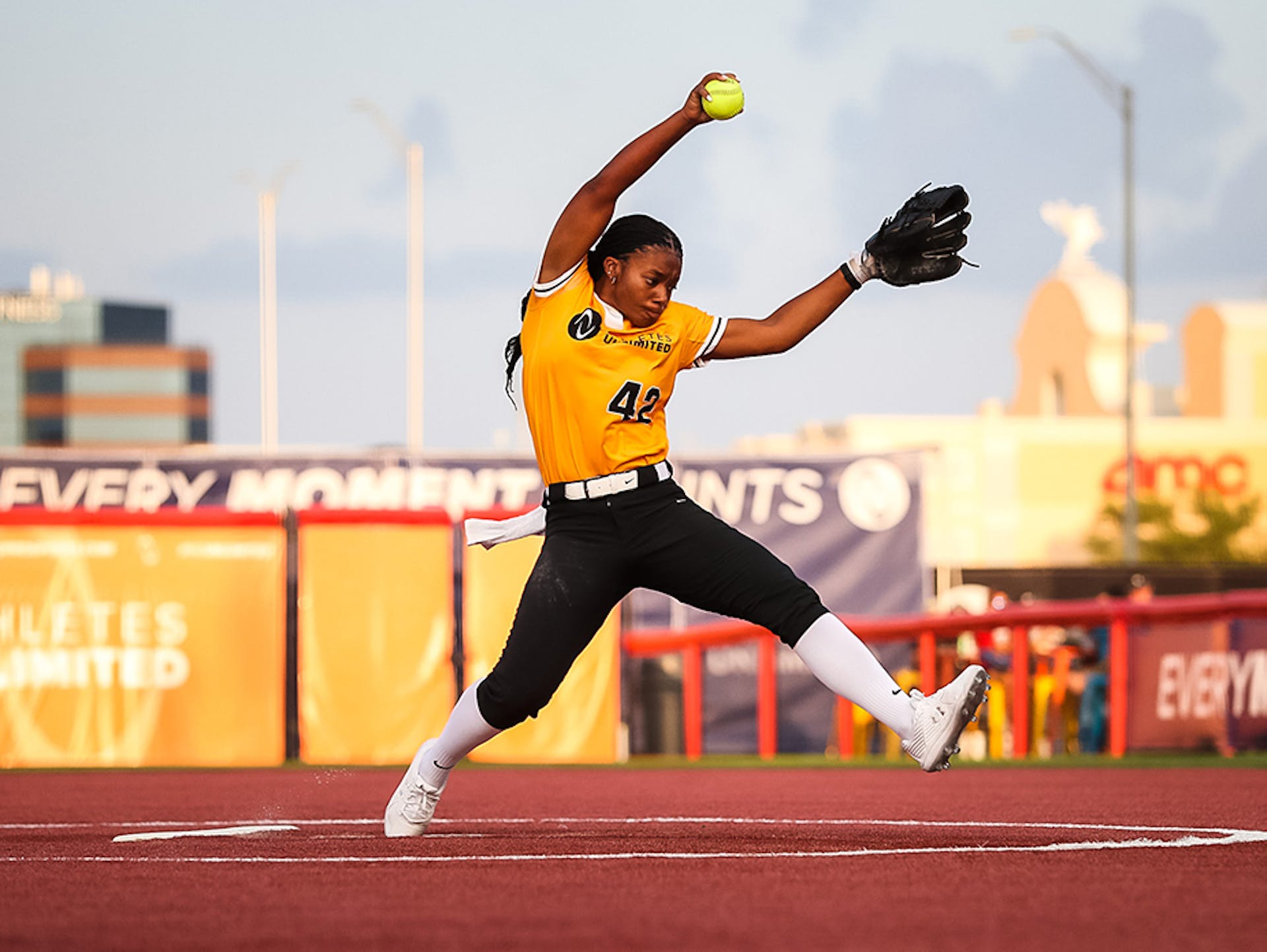 There were a couple of very cool changings of the guard involving softball royalty Saturday night.

Rookie sensation Odicci Alexander was every bit as good as hoped for as she made her first professional start for Team Osterman in a 3-2 victory over Team Piancastelli.

Alexander was cool and poised as she pitched into the fifth inning before she handed the ball over to the legendary Osterman, last year’s inaugural season points Champion of Athletes Unlimited.

Osterman inherited a 3-1 lead with a runner on first base. She immediately committed a throwing error, but like the veteran she is, she was able to limit damage in the inning to only a run, preserving the lead.

That enabled Alexander to earn the victory in her first pro start after she helped lead James Madison University to a historic run to the Women’s College World Series.

She pitched four innings, giving up three hits and two runs, one earned. She scored a total of 178 points for the game, including 40 for MVP 2 honors.

As for getting the call to start ahead of Osterman, Alexander seemed honored.

“I don’t know what to say to that,” she said. “I was just excited to be on the team with her. I think we complement each other very well. It was a dream, obviously.”

For Osterman, ceding the honor was all about trying to win the game.

“I assumed that they (Team Piancastelli) were going to assume that I was going to start,” she said. “Last year I started Games 1 and 3. I thought she was not very familiar to a lot of these hitters, so I was going to go with the odds being in our favor that they haven’t seen her a whole lot. Like she said, we complement each other pretty well, so if I went in after her, it would be a very different look, and it was.”

Alexander’s teammates helped her to a 2-0 lead in the bottom of the first inning against Sara Groenewegen .

Aliyah Andrews led off with a single. After Haylie McCleney grounded into a force-out Sahvanna Jaquish doubled to put runners on second and third. Tori Vidales drove both home with a double of her own.

Team Osterman put up a a run in the bottom of the third on an RBI single by Shelby Pendley.

Unlike Saturday’s first game, which featured five total home runs, there were no homers hit in this game, making it only the second game in the two-year history of Athletes Unlimited without a home run.

Team Piancastelli scored in the fourth as Kelsey Harshman led off with a single and later scored on a wild pitch by Alexander, who was just late in tagging Harshman out at the plate.

Things began to get dicey in the top of the fifth when Alexander walked Courtney Gano to start the inning. A murmur grew to a cheer from the crowd when Osterman came out of the dugout to replace Alexander in the circle.

Osterman committed a throwing error on Janie Reed’s grounder that allowed pinch runner Ciara Bryan to go to third. After a popout, Bryan scored on a fielder’s choice, but Osterman got two outs to end the threat.

“I came in and was like, ‘Oops, sorry, Bud,’” Osterman said. “I didn’t get us out of that as smoothly as it played out in my head, but thankfully she got the victory and I probably got the save (she did).  We were playing the odds of lefty on lefty. If I make a throw, it’s a completely different inning.”

MVP 3 honors went to Jaquish, who started behind the plate.

As far as a changing of the guard, Osterman was philosophical and gracious toward Alexander.

“It’s cool,” she said. “I would hope that softball fans understand what they’re seeing. There is going to be a changing of the guard. She has a bright future in this because I know that if there’s one thing I’ve learned, she’s going to learn and continue to get better. She’s going to continue to find her way to be successful in this realm. It will be fun to watch. I hope softball fans continue to follow. Obviously she got a huge following in the World Series, rightfully so, well deserved. Hopefully they continue to follow her into this and we can continue to grow Athletes Unlimited even more behind her.”

As for Osterman’s own future, she’s making this her last season.

“I’m just here to have some fun, throw some softball and ride this out,” she said. There’s not a lot of pressure for me to win again. If I do, great. I just want to have fun, put a good team on the field if I’m the captain and enjoy the moment for the five weeks we are playing.”