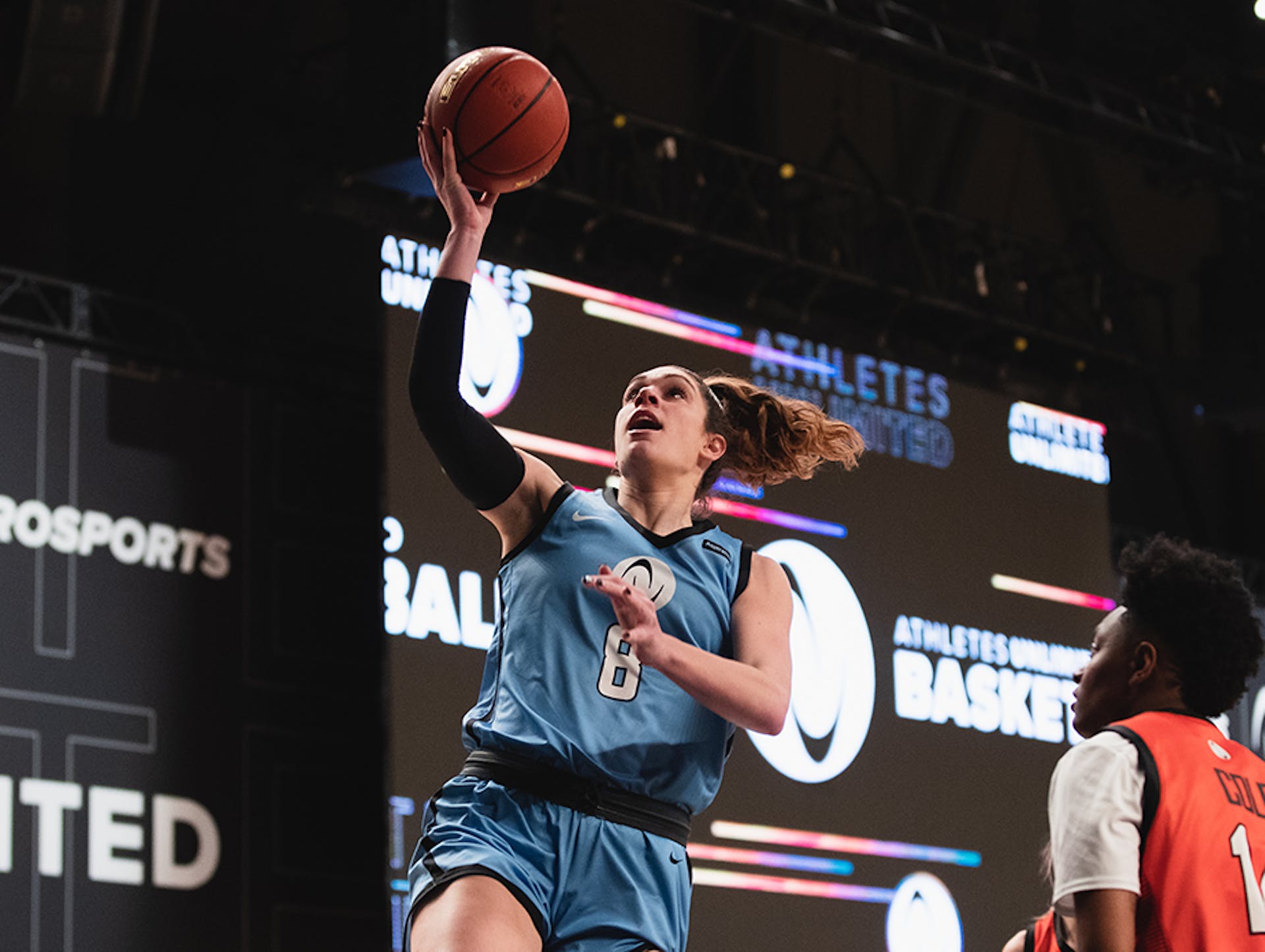 LAS VEGAS — Team Cloud closed out Week 2 with a loss to Team Brown.

The start of Week 3 was a different story in the rematch.

Kalani Brown registered her second double-double of the season with 16 points and 12 rebounds, while Drew Edelman scored 12 points and Laurin Mincy finished with 11.

Kalani said Team Cloud’s mindset wasn’t on Saturday’s loss, but more so on starting the week off strong.

“Not really revenge, just wanting to win and have a better week,” Kalani said.

Team Brown was led by Jantel Lavender, who had a season-high 21 points and eight rebounds, while Lauren Manis had her first double-double of the campaign with 17 points and 10 rebounds. Dominique Wilson scored 15 points and captain Lexie Brown chipped in with 14.

It was Lexie’s first loss since Week 1 after her squad went 3-0 last week.

Team Cloud came out of halftime on a mission, dominating every step of the way with a defensive effort that caused four turnovers, and an offense that outscored Team Brown 27-13 in the third quarter.

Team Cloud scored six points off turnovers in the third. Edelman came off the bench to score six critical points for Team Cloud, during a 13-2 spurt. Carrington, meanwhile, kept her hot hand with seven points in the quarter. Team Brown shot just 35.3% from the floor, hitting a mere 6 of 17. Team Cloud, on the other hand, dropped 11 of 22 (50%) in the quarter to steal momentum for the home stretch.

“I think obviously the momentum shifted in the third quarter,” Lavender said. “We kind of started getting into complaining (to the refs) a little bit, which I’m not really into. But we just kind of fell into this game where we worrying too much about the refs and that’s when you saw that big 14-point swing. We had a lot of open shots we didn’t make and that kind of kicked us in the butt in the end of the game.”

A relatively even start to the game fell by the wayside when Team Brown used a 6-0 run to build momentum and a 14-7 lead midway through, and eventually a 19-10 advantage on the strength of eight points from Lavender. Team Cloud carved into the deficit, making it 19-16. But an 11-7 burst culminated with a well-executed play that left Lexie alone on the perimeter for a wide-open 3-pointer and left Team Brown with a 30-23 lead after one. Team Brown shot a scorching 63.2% from the floor in the first quarter, while Team Cloud buried 9 of 17 (52.9%) from the field.

The momentum carried over to start the second quarter, as Team Brown used an 11-0 run sparked by Manis, who had seven of the points, to open a 42-29 lead. But when Cloud got in foul trouble, and Carrington took a breather, Team Cloud went with a bigger lineup and was able to close the gap.

“It felt like they were a little undersized,” said Edelman, who was named the second MVP of the game. “Wherever Kalani goes, she takes about seven people with her, so it opens up a little lane for other people. Definitely, I felt like I was being guarded by someone undersized. So it gave me the opportunity.”

Though both teams are loaded with sharpshooters, they finished a combined 6 of 24 from 3-point range in the first half.

KEY MOMENT: Trailing by a 48-42 margin early in the third quarter, Team Cloud scored 15 of the next 19 points to claim a 57-52 advantage with 4:37 left in the period. Team Cloud never trailed again and led by as many as 10 points later in the frame.

NOTES: Kalani Brown, who had a double-double for Team Cloud, was named MVP 1 for an additional 90 points. She finished the night with 492 points overall. Earning MVP 2 and 60 points was Edelman for a total of 392 points. Also with a double-double was Manis, who received 30 points for being named MVP 3. She tallied 318 points.

Team Brown and Team Cloud split the quarter wins for 100 points each, while Team Cloud earned added 100 points for winning the game.

Team Brown held a 32-16 advantage in bench points. … The teams combined to make 10 of 38 3-point field goal attempts, upping the Athletes Unlimited Basketball season total to 193 3-pointers in 13 games. Aspiration will plant 10 trees for every made 3-pointer this season as part of its “Trees for Threes” initiative. … Carrington, who has scored in double digits seven straight games now, became the first Athletes Unlimited Basketball player to be sent to the free-throw line for three attempts when she fouled while attempting a 3-pointer with 7:37 left in the first quarter. … Cloud was limited to a season-low nine points, marking the first time she has failed to reach double figures.