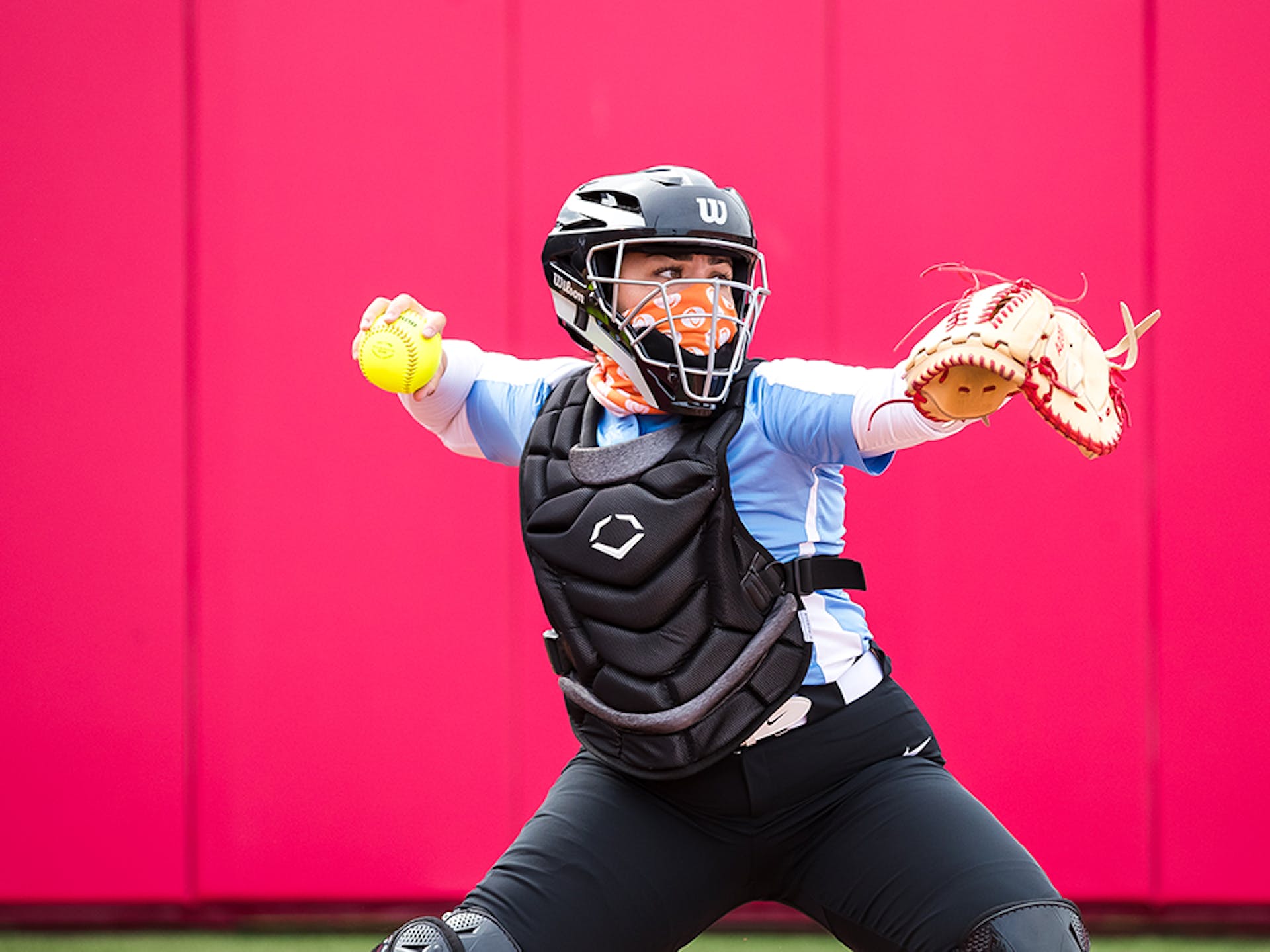 SASHEL PALACIOS EMBRACES HER BODY AND MEXICAN HERITAGE ON THE DIAMOND

Sashel Palacios remembers looking in the mirror in high school and not liking what she saw.

“Why do I have these muscles? Why do I have these big legs?” Palacios recalled over the phone from her home in Churla Vista, California. She was short, with a wider frame, and most of her friends were thin. “I didn’t fully understand where my little body would take me.”

After four impressive seasons at Otay Ranch High School, where Palacios was named to the First-Team Mesa League in her last three campaigns, she was close to making her goal a reality.

But during an unofficial visit to one college, a coach remarked on Palacios’ appearance with a backhanded compliment.

“He said something like, ‘If I hadn’t seen you throw down or your gun for an arm, I would never even have thought twice of you,’” Palacios said. “Because I am short. I’m a short little thing.”

Despite dealing with her fair share of doubters, Palacios had a standout four-year career at Arizona State University. In 2018, the five-foot, three-inch catcher became the first member of her family to play pro ball after signing a one-year contract with the Chicago Bandits.

“Now, I love my height,” said the 24-year-old Palacios. “I love that some people don’t think I could catch the rise balls that are high, but I’ve really worked to perfect my craft, and I’m really proud of what my body’s capable of doing.” Palacios credits her parents for the role they’ve played in her development. Kiko Palacios moved to the United States from Mexico as a teenager and was selected by the Cleveland Indians in the 1992 MLB Draft. He never signed with the club as he didn’t have the financial support to pursue a career in baseball. He and his wife, Soida, a former third baseman, were determined to ensure the same hurdle would never stop their children.

“They’re very passionate about allowing us to live out our dreams,” Palacios said.

One of Palacios’ dreams was to help Team Mexico qualify for the Olympics, a squad she’s played for since she was 17. Last August, the Mexican team flew to British Columbia for the Americas Qualifying Event, where only two Olympic spots were available for the 12 competing countries.

Mexico won its first six games at the tournament and held a 2-1 lead over Team Canada to earn its way to its first Olympic Games.

Palacios said that accomplishment was the highlight of her career.

“I think the first moment it hit me was when I looked at my parents,” she recalls. “I saw them, and that’s kind of when I lost it.”

Wearing all of her gear, Palacios ventured into the stands and hugged them.

She then called her grandmother, Loren Barajas, who was always too nervous to watch her games. Palacios knew how much her grandparents had sacrificed for her family when they immigrated from Mexico to the U.S., and she couldn’t wait to tell her grandmother that she’d be representing Mexico at the Olympics.

But Barajas had her own surprise for her granddaughter. “We were watching,” Barajas told her, and Palacios broke down once again. “I remember crying like a baby.”

Despite the postponement of the 2020 Games due to the pandemic, Palacios holds out hope that she’ll be playing in Tokyo in 2021. In the immediate future, she’s excited to get back on the diamond for the inaugural softball season of Athletes Unlimited this August.

“I’m excited to be able to change teams and learn from the multitude of talent,” Palacios said.

More than anything, she hopes to be a positive influence to young women who might have insecurities about their bodies. She wants these women to understand that hard work and perseverance, rather than physical appearance, will determine whether or not they’re successful.

“I’m super happy that I’m thick, I’m short, and my body’s perfect for what I need to do,” Palacios said. “Don’t doubt what you look like and your body type. If you love it, go after what you want.”

Jazmyn Jackson: What I Stand for