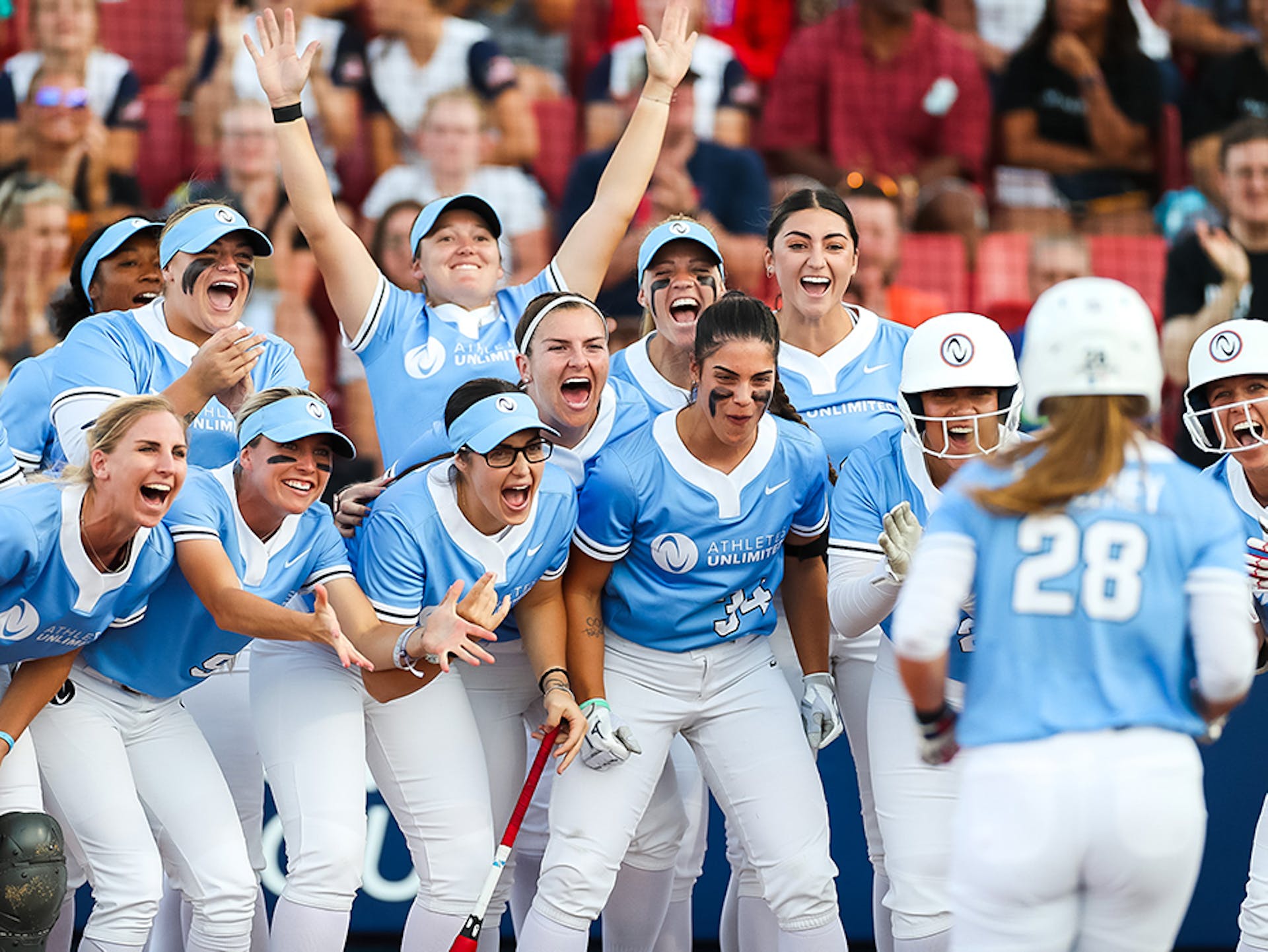 Sunday provided plenty of those at Parkway Bank Sports Complex in Rosemont. When Haylie McCleney made a signature diving catch off the bat of Riley Sartain-Vaughan, it closed out a 13-5 victory for Team Vidales (Blue) over Team Jaquish (Gold) in the second game of the day.

“I just want to say it was a bad read; it wasn’t a very good defensive play,” McCleney said. “It was just recovery. So I want to put that out there first. I made it look a little harder than it actually was.”

Don’t let the facts get in the way of a good story, McCleney. And Sunday provided stories from noon ‘til night with a fabulous twinbill, which began with a walk-off win for Team Osterman over Team Piper in the afternoon.

Sunday night’s game marked the 100th sporting event in Athletes Unlimited history, covering softball, volleyball and lacrosse. What’s more, a sellout crowd was on hand to soak it all in.

“It’s so cool to see this all come together and to have fans back in the stands,” said Team Vidales second baseman Hannah Flippen. “There was one point during the game tonight where Tori (Vidales) had a mishap. She had a foul ball where she didn’t swing and she faked like it hit her. The whole crowd reacted and started laughing.

“So it’s cool to hear them engage with us on those moments that are silly to us. Everybody gets to see what we see every day. We have those moments and then the big hits. You get the oohs and aahs. And little kids. There’s little kids all over the place that are asking for autographs.  They know our names. It’s just a really fun environment to play in and be around.”

Sunday night’s game finished as a blowout, but that doesn’t mean there wasn’t excitement for those fans and some stories of personal comeback for the players.

Team Vidales used some two-out thunder to grab a quick 3-0 lead in the top of the first. McCleney led off with a single, and she moved to second on Victoria Hayward’s sacrifice bunt. After Vidales popped out, Erika Piancastelli doubled to score McCleney.

Flippen followed with a two-run homer to left. It was Flippen’s first hit of the season after she had gotten off to an 0-for-11 start.

“It is nice,” she said. “You remember what you did yesterday, but you have to keep showing up. It is a new day, but it definitely feels good to have the first one out of the way.”

Team Blue starting pitcher Danielle O’Toole also had a rough beginning to her season, entering the game with an ERA of 22.24 and ranking 60th in the overall points standings.

She gave up a two-run homer to hot-hitting Sahvanna Jaquish in the bottom of the first, but she settled in and worked five innings of seven-hit, four-run ball to improve to 1-1.

“I think I’ve obviously had a little bit of a misstep, but I’ve had a lot of friends and teammates who have totally had my back and pushed me to kind of keep going,” O’Toole said. “I think the flip side is that yesterday is different. The day before is different, and you’ve just got to come out the next day and compete, and I think our team did that today.”

“Oh, yeah, 100 percent,” she said. “I felt like I stepped in something my dog let go. Yeah, for sure. My confidence as down a little bit, which is insane because all three of us just came back from Olympics. It’s just something I personally am going through. I think my teammates and my other friends who are not on my team really helped me out this week.”

McCleney won MVP 1 honors and 60 bonus points with three singles and a home run, which came in the team’s five-run fourth inning. She moved from 15th to sixth on the overall Athletes Unlimited leaderboard, going from 428 points to 668.

Jaquish’s homer for Team Gold was her third of the season. The Gold team also got a home run from Samantha Show.

“I felt good in the box in Tokyo, and I feel good in the box here,” McCleney said. “Like Hannah (Flippen) said, the game doesn’t know what you did yesterday. So I’ve got to keep showing up regardless, good or bad. That’s what I try to do every day.”