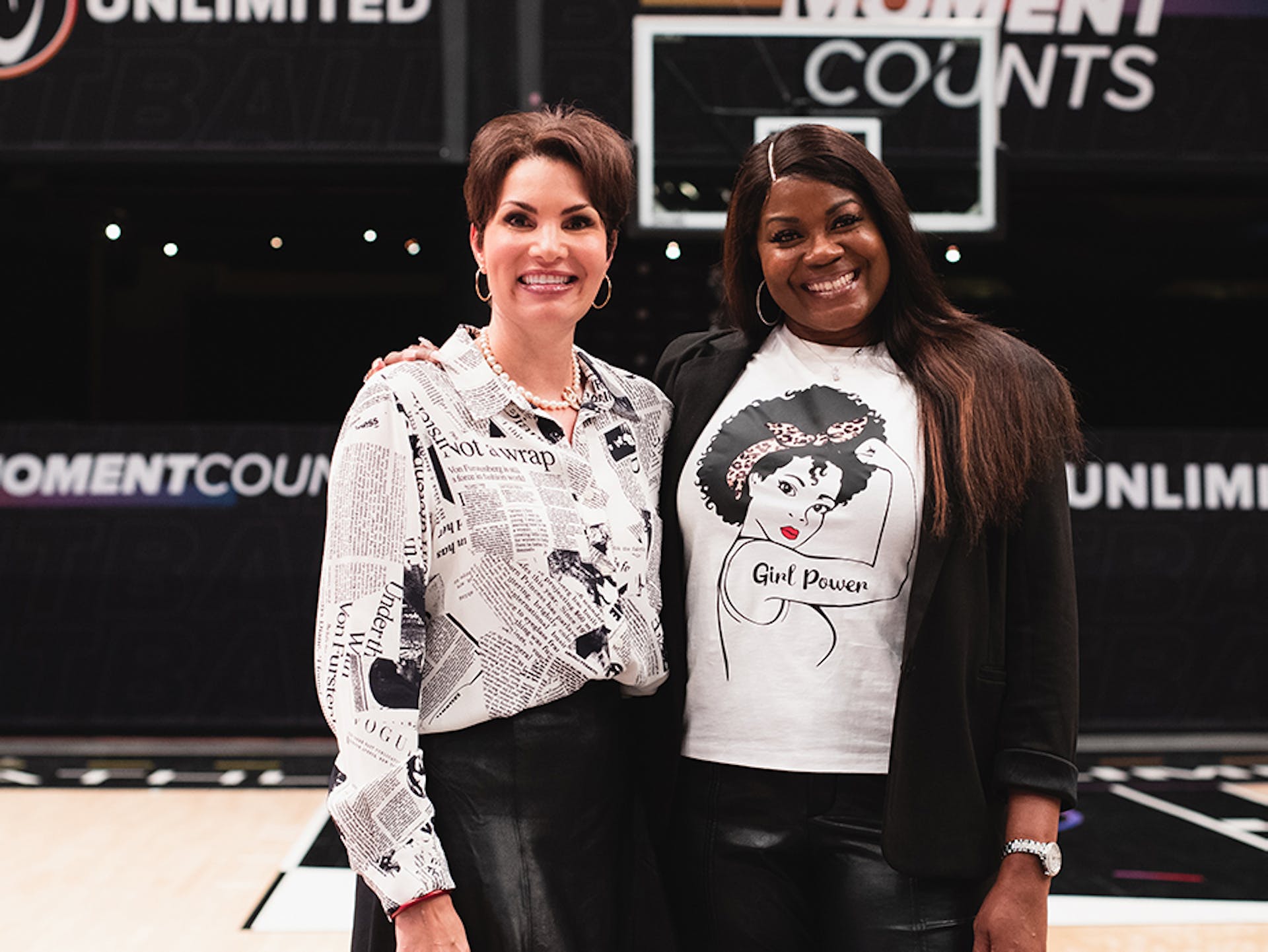 LAS VEGAS — Her eyes were wet.

It’s her passion and pride that overwhelmed commentator Cindy Brunson after becoming the first woman of color to become the primary voice for a professional sports league, handling the play-by-play duties for Athletes Unlimited Basketball’s inaugural doubleheader on Jan. 26.

Even greater, Brunson served her unique brand of basketball vernacular alongside four-time WNBA champion and six-time All-Star Sheryl Swoopes, someone she’d been idolizing since the legendary broadcaster’s days at ESPN.

Two legends in one broadcast booth, introducing the world to the newest women’s pro basketball league, and together they made history by becoming the first women of color as a broadcasting duo to be the primary voices for a professional league in the United States.

“It was really special, and it means more to me than words can say,” Brunson said. “It’s just icing on the cake of what’s been an amazing experience.”

Brunson has served as the play-by-play commentator for the majority of the inaugural season, and it’s reached far beyond anything the 46-year-old veteran broadcaster ever imagined when she was first contacted by Ilene Hauser, senior advisor of operations at Athletes Unlimited.

“To be cognizant of the people who look up to me and want to follow in my footsteps, I didn’t take (this job) just for me; I took it for all of the young faces that are black and brown – be that men or women, girls or boys – that want to do this same kind of job,” Brunson said. “I want to show them what is possible.”

And as the 2022 season winds down, it’s been Brunson’s exuberant personality that’s seeped into viewers and embedded into basketball’s fabric thanks to an unparalleled affection for women’s hoops that has helped elevate the exposure for AU Hoops.

“That’s what makes Cindy so special, she’s just very authentic,” Hauser said. “And you feel her passion and her energy. So when you’re passionate and excited, you also are passionate when something is super exciting. You can just tell her heart, I mean this game and her wanting to be a part of this game at this level, and be a leader, you can tell that’s what she’s always wanted.”

I didn't take (this job) just for me; I took it for all of the young faces that are black and brown - be that men or women, girls or boys - that want to do this same kind of job. I want to show them what is possible.
Cindy Brunson

After serving in different broadcasting capacities in Oregon, Brunson became popular on the national airwaves after joining ESPN in 1999, when she began anchoring weekend SportsCenter programs alongside the likes of Bob Ley and David Lloyd. During the week, she would anchor shows in the WNBA studio, or lead some of the network’s women’s college basketball coverage.

“That’s when I was my most happy,” Brunson said.

One only needs to scan Brunson’s Twitter feed to see just how happy women’s basketball makes her on a daily basis.

Thanks @SydJColson I had never called a half court buzzer beater for the win until today‼️😤 https://t.co/XAlIiZZAzy

Outside of supportive tweets for her alma mater, Washington State, no matter the sport, Brunson celebrates women’s sports tremendously. And not just because she saw someone else’s tweet, or because she read an article somewhere – although both of those falls into place, too – it’s because she’s taken the time to research women athletes and learn about them on a personal level. Her due diligence to what both amateur and professional women athletes go through in their personal lives allows her to bring a new appreciation for anyone she speaks about.

But when her husband, Steve Berthiaume, was offered the job of being the television play-by-play man for the Arizona Diamondbacks, they packed up their house in January 2013, put a “For Sale” sign in three feet of snow, and drove to the desert. And with the move went the departure of Brunson’s goal to become the next Linda Cohn, the legendary ESPN anchor. After all, when you go from local networks as a weather anchor and news reporter in Spokane, Washington, and serving as weekend sports and news anchor/reporter in Portland, to landing at the Mothership of all sports – the ultimate box has been checked.

Instead, for Brunson, like a true point guard dishing the assist to her husband, she landed on her pivot foot and had to make the right decision.

“I really didn’t have a plan B,” Brunson said. “I just had to figure a way to stay in touch with women’s basketball.”

And “by the grace of God,” as Brunson explained, former Phoenix Mercury COO Amber Cox reached out after learning Brunson was moving to Arizona. Cox followed Brunson on Twitter and expressed interest on having her on a Mercury broadcast.

Brunson admitted she had no idea what she was doing at the time but was caught up in the moment, having fun talking with Hall of Famer Ann Meyers Drysdale, and decided she was going to figure out the craft of broadcasting women’s basketball. And with the support of her husband, whom Brunson said has watched more women’s basketball than any non-diehard fan should, they worked out the kinks and honed in on the machinations of how to do play-by-play.

“And I have found my Shangri-La,” Brunson said. “I wish I would have known this 20 years ago. I wouldn’t have done anything different.”

When Hauser left Nike to join Athletes Unlimited, she knew exactly who she wanted in the broadcast booth, and it couldn’t have come at a better time for Brunson.

“When we started looking at broadcasters and play-by-play people, my head immediately went to Cindy,” Hauser said. “I’ve known Cindy for probably 10 years. I knew her when she was working at ESPN. … The thing that I’ve always been impressed about Cindy is her passion, her energy, her willing to work to find things out and to research. She just really cares about the game of women’s basketball. And I mean, we’re really honored to have her to be a part of this.”

For Brunson, the feeling has been mutual.

Though her quick stint with the Mercury led to an occasional fill-in appearance, the only steady stream of courtside broadcasting she’d been doing was with the Pac-12 Network.

So when Hauser told her they were putting together a new professional women’s hoops league that would precede the WNBA, and not be in competition, she couldn’t say yes fast enough.

“I’ve been dying to have a regular role in professional women’s basketball,” Brunson said. “I just had trouble getting traction. So I thought this is a great way for me to get my foot in that door.”

That’s putting it mildly, as Brunson has kicked the door wide open.

Brunson has demonstrated an amazing ability to call games alongside Swoopes, relay behind-the-scenes stories about the relatively unknown players in the league thanks to her due diligence by diving deep into their personal lives, colorizing the scenery in and around Athletes Unlimited Arena, and bringing an energetic and exciting vibe to anyone tuning in.

“I have the luxury of staying at the same hotel setup where all of the players are and you get to see them as people, them and the facilitators, how they brought in their families,” Brunson said. “How it really is this connected network of everybody wanting to achieve excellence in everything they do, but also managing what we all have to deal with in real life.”

She acknowledged she wasn’t exactly sure how she would blend the unique point system into her analytical calls during the game, outside of letting viewers know about the leading scorer, who had a double-double, or who was serving precision “dimes,” as she likes to describe assists. But, as she began calling the Xs and Os of the game, everything fell into place, and she’s helped make the metrics behind the individual leaderboard understandable to the garden variety basketball fan.

“I’ve never been associated with excellent shot-making and -taking on the regular as I have been with Athletes Unlimited Basketball,” Brunson said. “I think it’s exceeded everybody’s expectations of the level of competition … and I think that’s why we’re seeing such high-level basketball.”

The goal is to land a play-by-play gig in the WNBA, which nobody could deny is where she belongs, under a headset as the lead woman calling games for the most dominant women’s basketball players in the world.

She’s actually interviewed with NBA teams and made the shortlist with the Philadelphia 76ers. This past season she convinced her bosses at the Pac-12 to let her add men’s games to her repertoire and was hired by FS1 and ESPN Radio to do men’s basketball games as well as women’s games from one of the most dominant conferences in the nation.

Considering the past five weeks she’s spent in Southern Nevada, a short drive from Phoenix, she’d be a fantastic fit for a team like the Las Vegas Aces, a potential favorite with new coach Becky Hammon in place, and former league MVP A’ja Wilson re-signed, since she herself is one of the best who’s spoken into a microphone

“I want to keep going,” Brunson said. “The mission is to get with a WNBA team and just continue to talk basketball as close to year-round as I can.”

A deserving accomplishment that just may dampen her eyes once again.