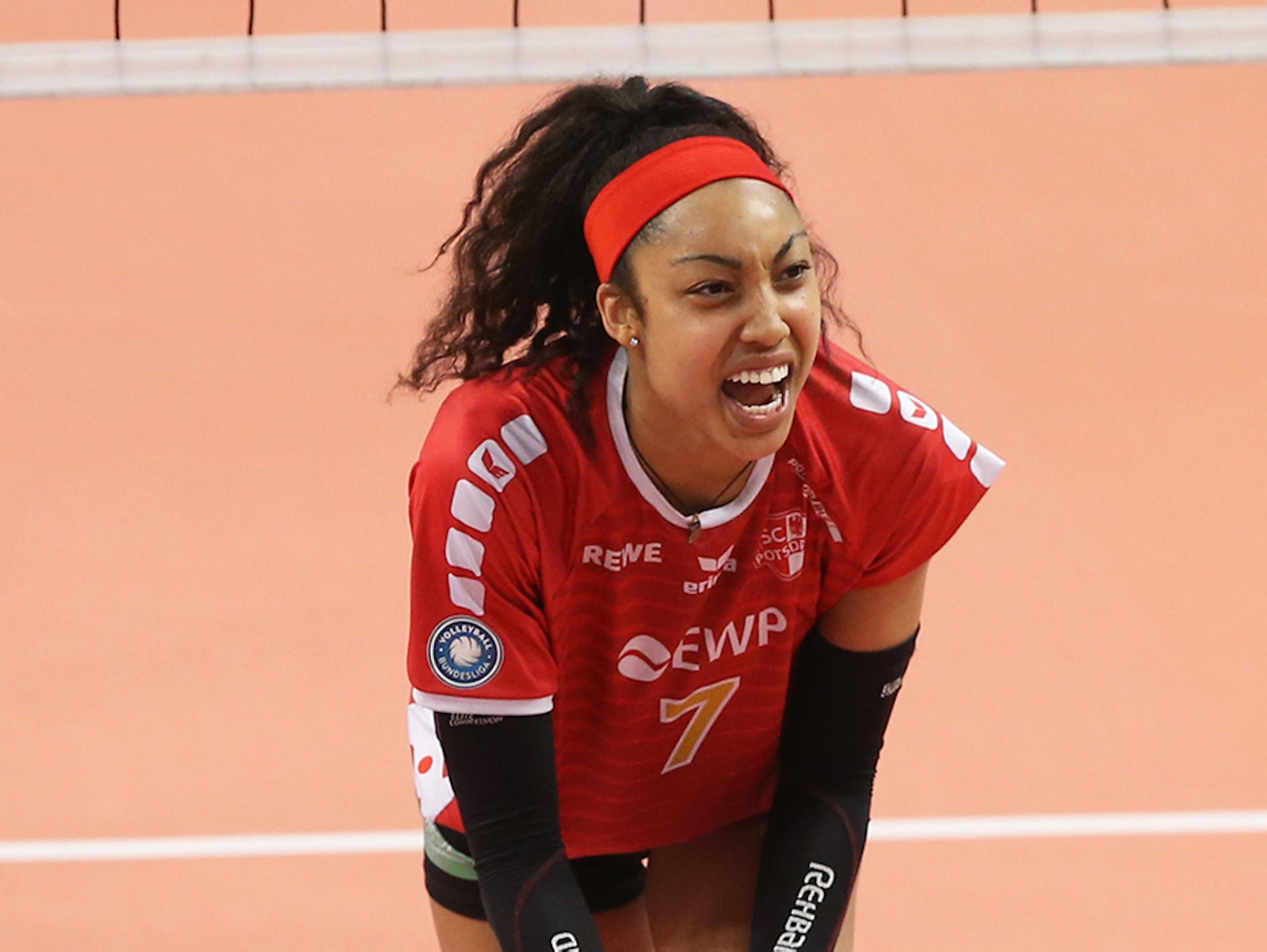 Like many volleyball players with Athletes Unlimited, Grant relishes the thought of playing the sport she loves in the United States.

On the other hand, it probably won’t take long for the wanderlust to kick in and for Grant to resume her globetrotting ways once the COVID-19 pandemic is behind us.

Grant, a native of Warren, Ohio, and a graduate of Penn State, is a regular citizen of the world, having traveled to 28 different countries or territories. Spanning the alphabet, she has been everywhere from Anguilla and Austria to Ukraine and many ports of call in between.

She has played professional volleyball in such places as Germany, France, Poland and Thailand.

Now Grant has joined a pioneering group of women volleyballers in the Athletes Unlimited Shield in Dallas, Texas for five intense weeks.

“I like the idea that it’s a short season,” she said. “They are in America, which is really nice. We had hoped that our families could watch the games, but obviously, COVID had rules of its own going on. I really like that they care about you outside of volleyball. If you have other things going on in your personal life or home life or whatever, they’re very understanding and try to help you and work with you. I just think that’s really nice because overseas, it’s not really like that.”

Grant chuckled at the irony of being a world traveler who is content to cool her jets at home for a short time.

“I think it’s really nice to travel,” she said. “That presents its own challenges being out of your country with the language barrier and all those things. Playing in the States is nice because you’re close to your family although this time around, they can’t come to games, but eventually they will be able to. You can speak English all the time, and you have similarity in culture. You can tell a joke that the person next to you will understand. It will definitely be nice. It’s five weeks, so it’s not like you can’t travel when you’re finished.”

Grant cultivated her love of the world through both business and leisure travel. Like many business travelers, when work obligations limit what she can see in a country, Grant goes back to take it all in.

Her reasons are many.

“Honestly, I really like to eat and try different foods,” she said. “I love it. It’s like my favorite part, to go to different places and see how they live and to eat the food. That part I really enjoy and seeing the architecture and the people. Picking up different languages is pretty cool. I like talking to more people. I’ve met some really interesting people doing it.

“I try to do five (countries) per year. That’s my bucket list because I want to do all of them if I can. Obviously, a lot of the trips have been attributed to volleyball. But I try to go back, also, even if I have been there for volleyball and didn’t get to see enough. When you’re going to the hotel and the gym, I don’t really count that – I have been there, I guess, but I haven’t really seen it.”

“I would say France for me. I love it there,” she said. “I hope I can live there at some point. I liked Korea; I really had fun in South Korea. Bermuda I loved because it is picturesque, like I had never seen anything like this that wasn’t in a magazine before. And the food was really good. Brazil was fun. It was cheap. The food was incredible. Everyone was super nice. I think those are my tops. And Hungary. Hungary I liked the best overall for food for vegans.”

Those who have traveled abroad know it always helps to learn at least a little bit of the language or languages spoken in a foreign country. Grant has become somewhat of a linguist. According to her Athletes Unlimited bio, she speaks some French and understands some German, Italian and Spanish.

Having that ability can open doors.

“I do think it helps. It’s hard. I’ve had some countries that say, ‘You should learn my language.’ If I could learn and perfect 26 languages, I wouldn’t be sitting here talking to you,” Grant laughed. “I’d be somewhere rich working for the government or something like that because I could speak all those languages.

Of course, no matter how prepared a traveler is or how much one learns about a foreign country or culture, there are bound to be some awkward moments.

Grant recalls one such moment that had an amusing, if potentially appetite-killing, twist to it.

“It was my first year in Thailand,” she said. “I think the culture difference was just so extreme. Coming right out of college, I was at Penn State, and everything was very structured and organized. I went there (to Thailand), and it was the complete opposite. In my mind, it was like, ‘This is complete disarray,’ what’s going on around me. But when I decided to just relax a little bit and embrace what they had going on it was really fun.”

Then came a deep breath as she recalled one memory.

“There was a dinner,” she began. “For them, nature is very sacred. They don’t kill bugs like we do here. They really respect the wildlife. We were at dinner. I saw [a bug] in my coach’s food, it was moving in the lettuce head. I was like, ‘There’s something in your salad.’ He’s looking at his salad, and he picks out a roach and he just kind of throws it to the side. I was like, ‘Oh no, sir. No way.’

Grant and company survived the experience, and she holds fond memories of Thailand. And for most world travelers, that’s the whole point. The beauty and richness of visiting different countries comes in learning valuable lessons about the human race.

As for what the future holds for Nia Grant — well, look out, world. She has big plans for you, even though there might be some more stay-at-home work to do.

“Honestly, my goal literally is to go to every single country. I just want to go and do everything. Right now, I have to go to Australia to get all the continents. And then I want to go to Japan because it looks super awesome … Denmark, I really want to go to … Antarctica, I’m planning that trip, as well.”

Let’s hope she bundles up for that one.

Check out all the countries Nia Grant has visited