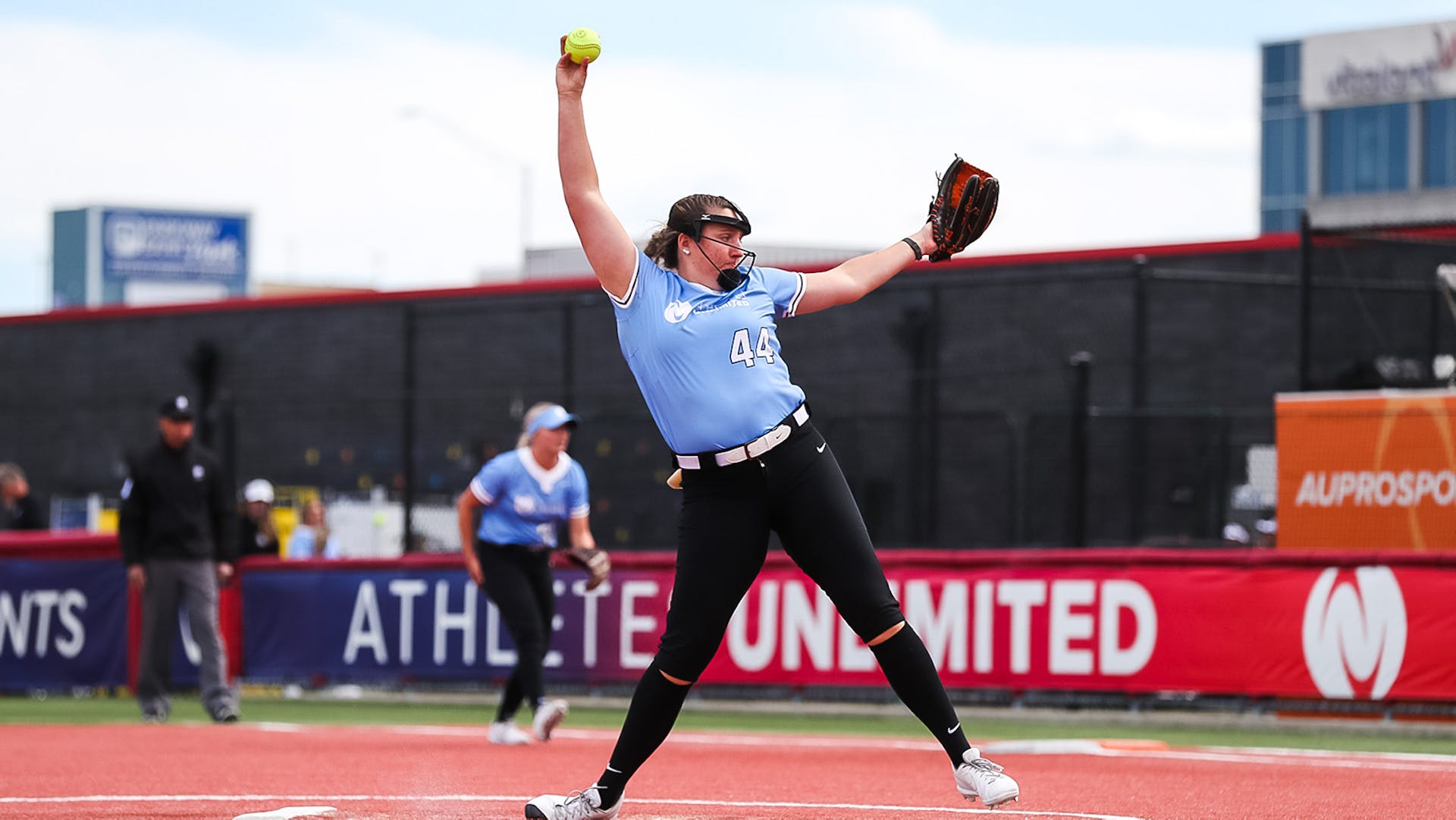 Carrie Eberle couldn’t have scripted a better week or so for herself.

The rookie right-handed pitcher earned a captaincy for herself with three straight strong starts last weekend.

That meant Eberle would be drafting her own new team for this week. She looked like a genius on all fronts Saturday as her team (Blue) scored a well-played 5-2 victory over Team Chidester (Orange).

What’s more, her in-game strategy and her table-setting draft picks at the top of the batting order set the tone for a weekend-opening victory.

“It’s been awesome,” said Eberle, who improved her record in the circle to 3-1 with 17 outs via groundballs Saturday. She also earned 60 bonus points for being voted MVP 1 of the game. “I’ve just found such a great group that I’ve loved playing with these past two weeks. It’s just helped me be able to become my best self. It’s been a whirlwind for sure, but it’s been a lot of fun.

Team Eberle got things going right away against Team Chidester starting pitcher Amber Fiser. Ali Aguilar opened the game with a walk, and she went to second when Victoria Hayward beat out a grounder for an infield hit.

A groundout off the bat of Anissa Urtez moved the runners ahead. Aguilar slid home safely on Bubba Nickle’s fielder’s-choice grounder. After Kelsey Harshman struck out, Lilli Piper pinch hit for Riley Sartain-Vaughan and lined a single to right to score two runs and make it 3-0.

Piper was not at all surprised to pinch hit so early in the game.

“No, we talked a lot about it before the game,” she said. “Just kind of the game plan what was needed in that situation. Carrie’s been super awesome and a great leader, setting us up for success. That’s what she did. I got my job done.”

There was no scoring until the fifth, when Team Eberle added one against Cat Osterman, who came on in relief off Fiser in the fourth. Aguilar led off the fifth with her third walk of the afternoon. Hayward sacrificed Aguilar ahead, and Urtez followed with an RBI double to the gap in right-center.

“It was really important, I think, just keeping the pressure on her (Osterman),” Urtez said. “I was down 0-2 in the count. I was looking for something high, something that was going to be elevated. It’s pretty much sticking to my own plan and then producing it. It came my way, and I’m really, really happy about that and excited for the team to be able to get that win today.”

Team Eberle won 10 points for winning the first inning, but Team Chidester was able to take 40 points, including rollover points, by winning the fifth inning with two runs in the bottom half. Pinch hitter Jordan Roberts accounted for that with her first home run of the season, a booming opposite-field drive to right-center. Roberts was voted MVP 2 (40 points) for her big hit, with Urtez taking home MVP 3 (20 points) for her performance.

Eberle’s team added a run in the top of the seventh. Hayward opened with a walk and a stolen base. She went to third on Urtez’s fly to center and scored on a sacrifice fly by Nickles.

Second baseman Aguilar and center fielder Hayward combined for four runs, four walks, a hit, a sacrifice and a stolen base. Eberle drafted Aguilar in the second round and Hayward in the seventh after making shortstop Urtez her top pick.

“I’m so fortunate,” Eberle said. “My strategy was that I wanted to lock down the defense, especially up the middle because it’s so important to me as a pitcher. It just brings a lot of options to the table. Having (Hayward) right behind Ali worked out really well.”