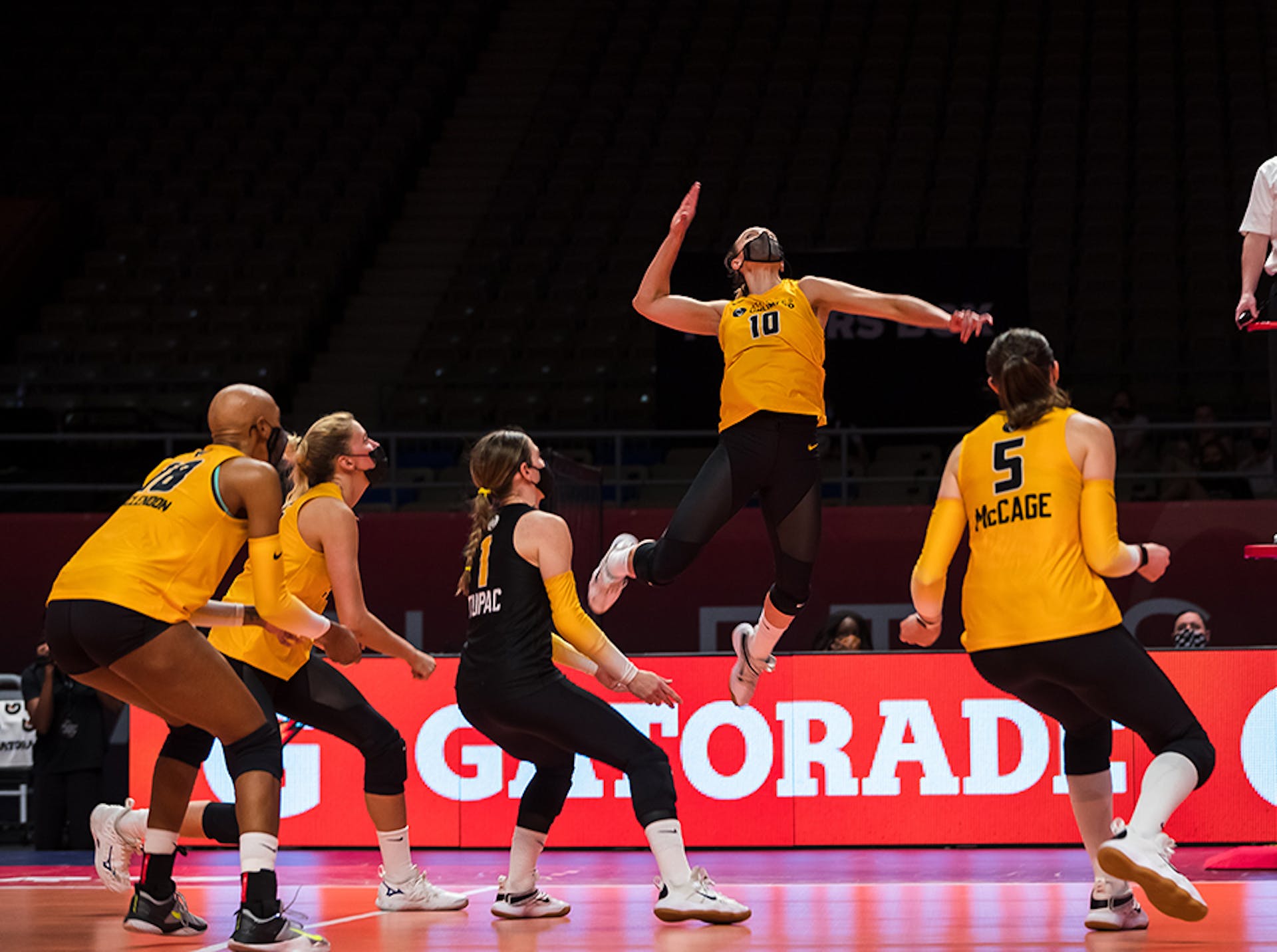 On Saturday, Mar. 6 Team Larson faced Team Edmond and lost two out of three sets, but managed to win the match by a single point.

This week, even though the team leaders on the court were the same, their line-ups were different. Those shifts resulted in a very different outcome for Team Larson who finished 2-1 and won the match 80-77.

The first set provided all the intensity and suspense one could normally find in a whole match, resulting in the highest set score in league history. The final score was 37-35 with 19 ties, 11 lead changes, and 14 set points.

The first set was defined by amazing defense and long rallies, with 84 total digs between the two teams. Neither team was ever able to create a large lead gap, with the largest lead coming from Team Larson at 21-17.

A double sub by Team Edmond at 17-21 proved to be a crucial move as Sherridan Atkinson was put into the front row in replacement of setter Samantha Seliger-Swenson. Atkinson proceeded to get three blocks to help Team Edmond battle back to 25-25, preventing Team Larson from winning the set when they were up 22-24. Opposite Willow Johnson and setter Seliger-Swenson subbed back in for Team Edmond when Atkinson reached the back row, and Seliger-Swenson immediately found a kill with Edmond, to put them at their first set point.

Yet, the set was no where close to finished as the two teams battled on. On Team Larson, opposite Sheilla Castro found her connection with setter Brie King, scoring five kills during the marathon. Outside Aury Cruz on Team Edmond had four kills during the same period, including one that she earned from an overturned challenge at 29-30. If the call hadn’t been overturned in their favor, Team Edmond would have lost the set 31-29.

Instead the two teams were tied yet again.

With Larson on the serving line, her team was able to close out the set with a kill from outside hitter Deja McClendon and a final kill from middle blocker Taylor Morgan.

“For us, it was kind of about just being patient,” King said. “They were defending so well, but we I think we just kept telling ourselves, ‘They will crack, keep driving to the ball, keep finding different solutions,’ and I think that’s what helped us win the first set.”

Despite six service errors, the second set went far more smoothly for Team Larson, who won 25-17, earning 40 win points. After Team Larson jumped to a 11-5 lead, Team Edmond could never recover to tie the set. Five kills from Larson, along with three kills from middle blockers  Taylor Morgan and Molly McCage, and three from Castro, helped Team Larson to build a substantial lead.

Entering the third set, it seemed unlikely that Team Edmond would overcome the match point differential, but they continued to battle fiercely to prevent a clean sweep, winning the final set 25-18, and picking up 40 win points for each player on Team Edmond. Team Edmond returned to playing the level of defense they displayed in the first set and improved their performance on small ball touches.

For the match, McCage had two blocks and 11 kills on 22 attempts for a .410 attack percentage. She was voted MVP 1 honors for an additional 60 points, putting her at 292 overall.

Libero Dalianliz Rosado had an outstanding match, earning 16 digs and five assists. Her defense in the first set helped Team Edmond stay alive and catch up to Team Larson. She was voted MVP 2 honors for 40 points, putting her at 193 for the match.

Atkinson was voted MVP 3 for 20 points for 125 total. Despite not playing the majority of the first set, Atkinson had three blocks and five digs.