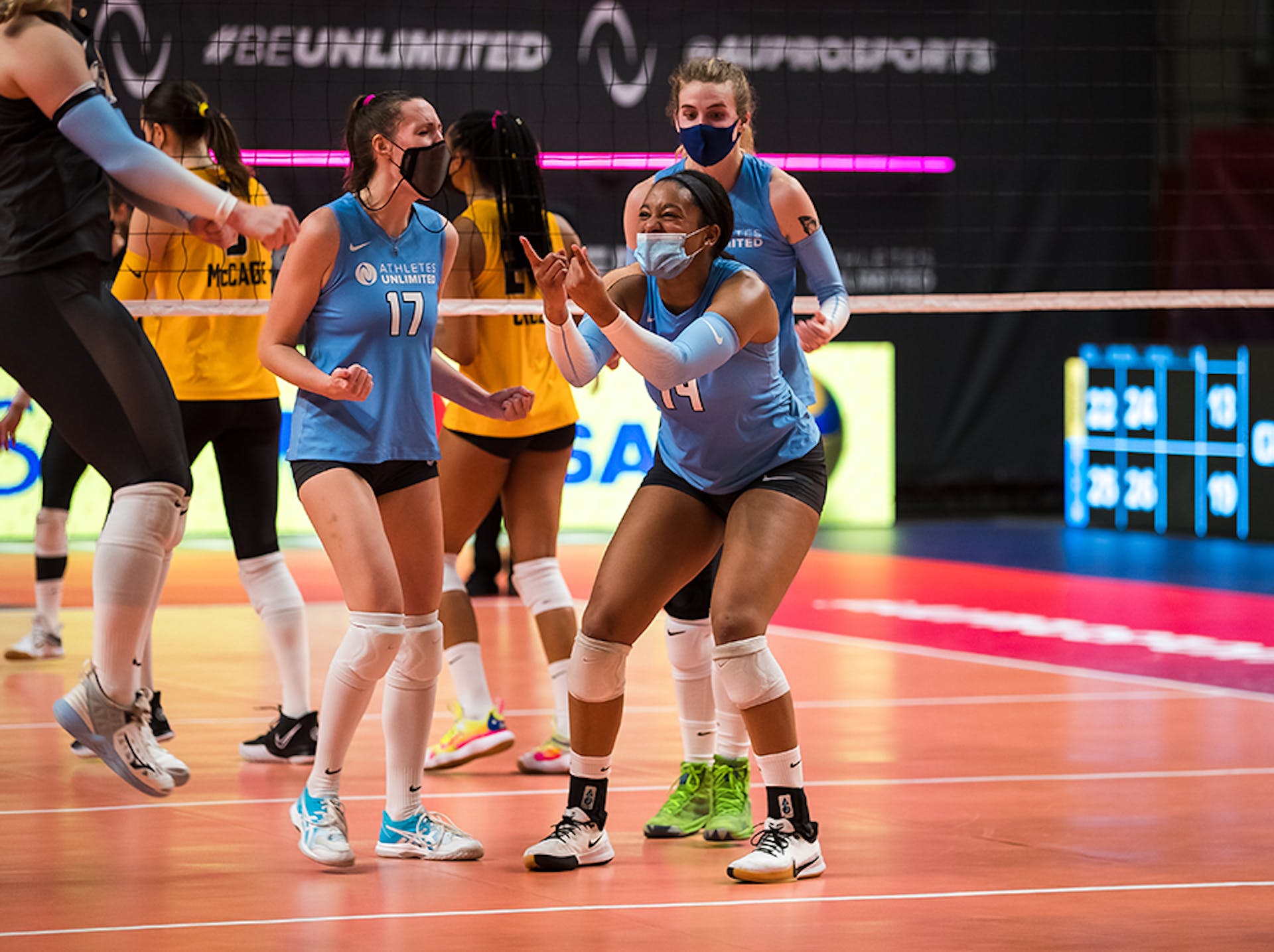 Despite the match marking her professional debut, rookie Leah Edmond looked like a seasoned veteran on the court. The University of Kentucky alum led the way for Team Clark (Blue), who swept the match in straight sets and outscored Team Cruz (Gold) 76-65, taking all 180 win points.

Edmond was a force to be reckoned with on the court, tallying 14 kills, six digs and two blocks for 180 stat points. She was voted as MVP 1 for an additional 60 points, bringing her to the top of the leaderboard after the first day of competition with 420 points overall.

It was a night for the rookies generally speaking for Team Clark, as captain Tiffany Clark and middle blocker Taylor Morgan also made their professional debuts. The trio brought both energy and execution to the court, and each landed in the top 10 on the leaderboard after the first night of competition. Clark, a libero, kept her team alive with 16 digs and earned 102 stat points, bringing her total to 282 points. Close behind was Morgan, who earned 93 stat points on seven kills, five digs, and two blocks for 273 points.

Team Cruz jumped to an early 7-1 lead as outside hitter Erin Fairs went on a six-point serving run, but Team Clark gained control midway through the set with the help of a series of serves from Taylor Sandbothe. Captain Aury Cruz ended Sandbothe’s serving run with a dynamic kill from the back row, tying things up at 15-15, but Team Cruz was unable to regain a substantial lead and Team Clark won the set 25-21, earning 40 win points.

In Set 2, Team Clark and Team Cruz kept things close as they traded points evenly throughout the course of the game, with neither team gaining more than a three-point lead. Team Clark pulled ahead to take the set 26-24, earning another 40 points.

Taylor Bruns, who came in late in the first set to replace starting setter Val Nichol, helped Team Clark surge forward in the third set with a seven-point serving run. With a 17-12 lead, Team Clark cruised to a 25-19 victory over Team Cruz.

Opposite Ebony Nwanebu left the first set with an attack percentage of just .090 with two serving errors, but ended the match with an attack percentage of .280. Limited errors throughout the rest of the match, along with earning her team 13 kills, contributed to Nwanebu earning MVP 2 honors for an additional 40 points, putting her at 344 in total.

Outside hitter Cassidy Lichtman finished the match with 10 kills and seven digs. She was awarded MVP 3 honors, giving her 20 points. Combined with 143 stat points, she tallied 343 points on the night.

The first win of the season meant a lot to Lichtman as she has played an imperative part in getting the league started as part of the Player Executive Committee.

“Just coming into this game tonight and realizing that professional volleyball is being played in the U.S. today, I didn’t expect to be emotional about that to this level … It’s a real thing that’s happening, and it’s not only happening, but it’s happening at a level that’s such high-quality,” Lichtman said. “To come out with our first win was really fun and just motivated me for the next one.”

Although her team didn’t secure any win points, outside hitter Aury Cruz earned 114 stat points. The team captain had 16 kills on 34 attempts for a .320 attack percentage.

“I feel like we need to just keep pushing, like we did at the beginning on the set,” Cruz said. “We just got in a moment where we just stopped when the other team started making adjustments and we couldn’t concentrate. That’s something we really have to do and bring in as a game changer.”