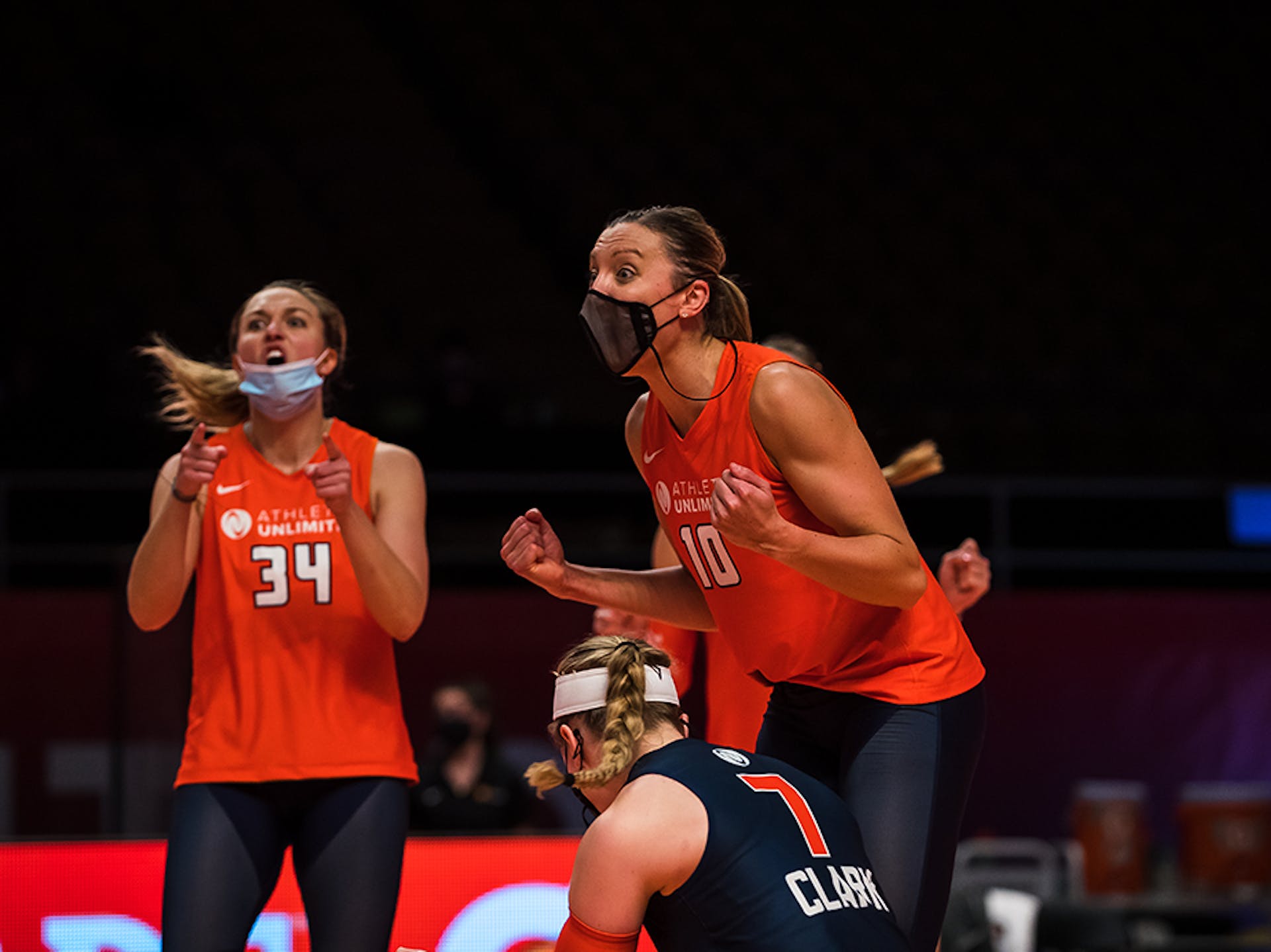 For the second time of the night, the record for total points scored in a match was broken.

Outside hitter Jordan Larson had 15 digs, one ace and 20 kills on 42 attempts for a .380 attack percentage for 376 points. Her performance earned her the MVP 1 for an additional 60 points and 436 overall, beating Deja McClendon’s newly set record by one point.

In the final match of Week 4, Team Larson came out strong and took all three sets against Team De la Cruz, winning the match 75-56. With their match win, Team Larson ended the weekend undefeated.

In Set 1, Team Larson jumped to an early 10-3 lead with an eight-point serving run from middle blocker Taylor Sandbothe. After Sandbothe’s run ended, Team Larson sided out on their first attempt throughout the rest of the set, until they were held at set point for four attempts. Larson got the final kill of the game, ending it 25-15. For the set, Larson hit an incredible .530, getting 10 kills on just 17 attempts

A pivotal defensive point occurred at 13-16 as a long rally took place. Both sides made numerous scrappy plays, including a dig off the shoe of Aury Cruz, but a De la Cruz kill eventually ended the point in her team’s favor. As the play concluded, Team De la Cruz erupted in a moment of intense celebration.

Yet, the point wasn’t enough for Team De la Cruz to muster the momentum to halt Team Larson from winning the set. Larson had another six kills and just one error to hit .357, while Ebony Nwanebu hit .235.

In Set 3, Team Larson closed out the game, winning the final set 25-20 and the match 75-56. Setter Kaylee Manns continued to find success with multiple hitters in her offense and Team De la Cruz was unable to stop each player from scoring.

“It obviously helps having a ton of different options and a ton of experienced hitters as well that are able to move around and put the ball in different places,” Manns said. “It made my job very very easy; I was able to put the ball to any pin or any middle and somebody was able to get a kill.”

Libero Tiffany Clark obtained MVP 3 for her scrappy defensive performance for Team Larson. She covered her teammates numerous times to prevent them from being blocked and had 11 digs.

Heading into the final week of the inaugural Athletes Unlimited Volleyball season Larson will lead Gold (No. 1), De la Cruz will be at the helm of Orange (No. 2), Karsta Lowe will captain Blue (No. 3) for the second week in a row, and Brie King will be at the head of Purple (No. 4). This will be King’s first week as a captain.

Where to Watch: Week 4

Elizabeth McQuitter: Before the WNBA