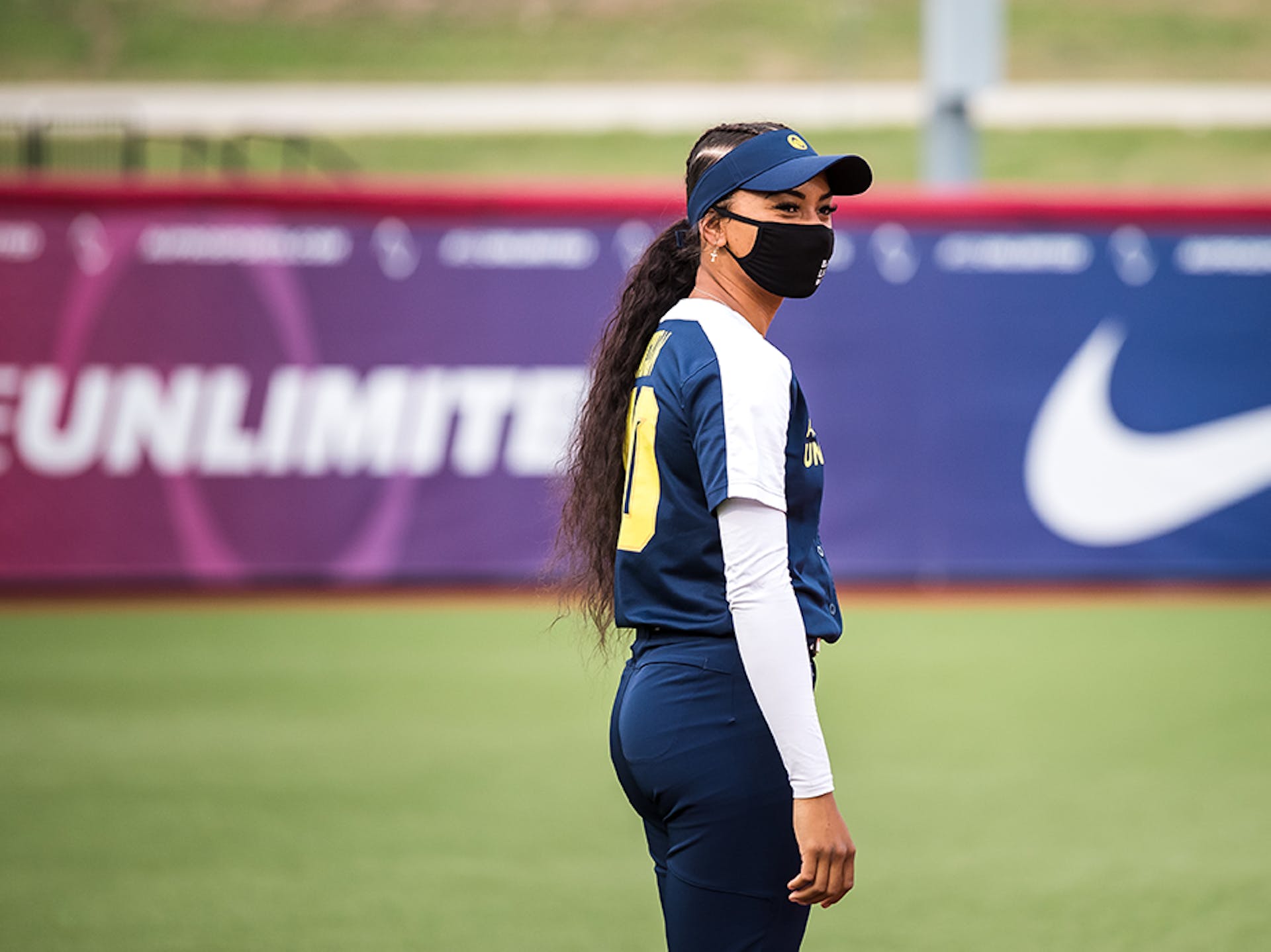 Grace and passion. Those words describe Jazmyn Jackson on the softball field.

They also sum up the way she works and fights for social justice in America. Jackson, a former decorated student-athlete at the University of California-Berkeley and member of Team USA, will bring her passion to the field later this summer as she joins Athletes Unlimited for its inaugural season.

As an outfielder-infielder for Cal and Team USA, Jackson knows all about multitasking and versatility, even though settling in at one position holds an enticing appeal for her.

In the same vein, Jackson has been a strong and eloquent voice for social justice in the wake of events that put the focus on how Black Americans have been treated by police departments, leading to nationwide protests.

Just as she has been a selfless softball player, Jackson’s motives for supporting such movements as Black Lives Matter are rooted in something greater than herself: family.

“The time is finally here and I know my brothers are watching me. I know they watch what I post, and I know me speaking out or speaking up is like speaking for them. I want my brothers to know that their lives matter, not only to me, but to the world. It can be really discouraging to be a Black man in America … I will absolutely see this thing all the way through.”

As the discussion of race relations in the United States has taken a new and more serious turn, Jackson is well aware that there might be those who don’t agree with her or question her outspokenness and involvement in movements such as Black Lives Matter.

“It’s funny because a lot of Gen Zers are very socially active, as well,” she said. “They’ve kind of empowered me to keep going. My younger siblings and fans, they make me feel like it’s a good thing to use my voice.

“I haven’t really received too much backlash. I’ve had people inquire or make comments like, ‘I don’t believe this thing is good.’ Then I’ll explain or say, ‘Thanks for sending that.’ I’m not mad at anybody who disagrees with me. I just think it would help open their eyes that this is not a political thing or an argument thing, but it’s about people being worthy of a good life.”

This is not a political thing or an argument thing, but it's about people being worthy of a good life.
Jazmyn Jackson,
Athletes Unlimited Outfielder

Just as Major League Baseball has seen its number of African American players decline precipitously over the past four decades, women’s softball has had its own diversity issues, as well. Jackson said she hopes her play and the performance of other women of color can help make the sport more attractive to a wider spectrum of girls and young women.

Part of her wanting to settle in at one position on the diamond stems from Black athletes being stereotyped. But she also knows her versatility has served her and her teams well.

“My sister is an incredible athlete; I honestly think she’s going to be better than me and to me she’s an infielder but as a Black girl, I know that she could just be stuck in the outfield because she’s fast,” Jackson said. “That’s another reason I think it’s so important for me to speak out on the softball side, as well.

“It is really cool that I have gotten to play every position because I think that’s why I am the player that I am. My softball IQ is so high because I literally know what it’s like to receive a ball from an outfielder at third base. And then being an outfielder, knowing what the receiving position is feeling or getting from me.”

Still, frequently playing different across the diamond has prevented Jackson from solidifying herself in a single position.

“It has been kind of tough because I want to get really good at one thing,” Jackson said. “I’ll do anything to help my team. I’ll go anywhere. But it’s like, I just want to be really, really good at something.”

As for the future, Jackson sees plenty of softball for herself and then perhaps a career in professional sports. A business degree from the prestigious Haas School of Business at Cal gives her plenty of credibility. This self-described “East Bay baby” says she’s a fan of both the Oakland Athletics and the New York Yankees.

As for what she’s most proud of in her life, both on and off the field, she said it’s perseverance.

“I’m most proud of sticking with it,” Jackson said. “I’m most proud of the places that I’ve been. From where I started in life, my parents didn’t necessarily come from a lot. But I have traveled the world. I’m certainly most proud of my free education at Berkeley. I was fortunate my parents didn’t have to pay for it. I’m just very proud of where I’m at now because how I started, this is not where a person would think I might be. I’m very proud of that. I really don’t like goals because you can meet a goal and it can fizzle out. I’m definitely a huge dream girl, and I have a long way to go.”

Volleyball: Where to Watch Week 5