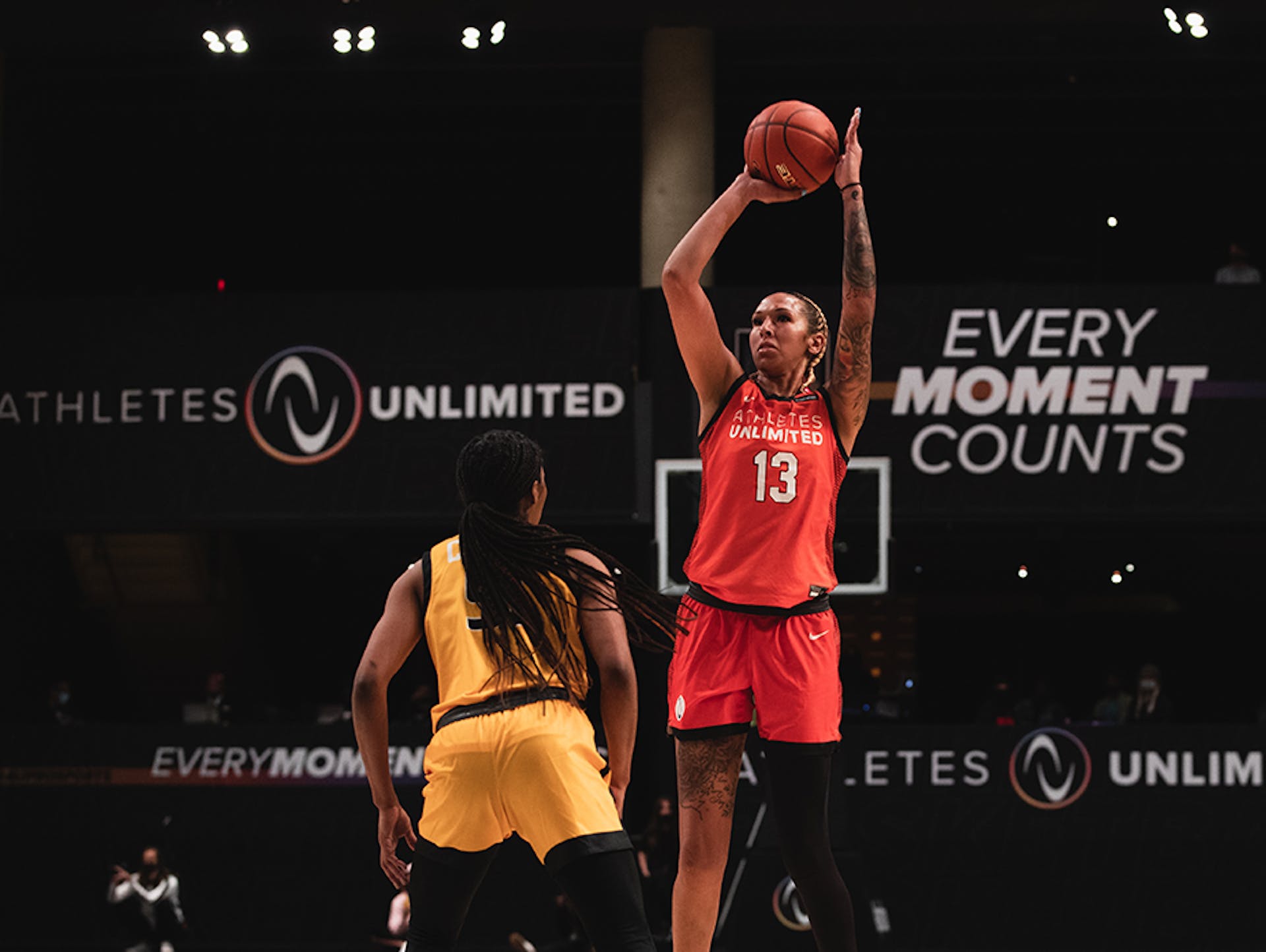 Mercedes Russell scored 20 points to lead Team Russell to a wire-to-wire 79-71 victory over Team Mitchell in the final game of Week 1 of Athletes Unlimited Basketball.

Team Russell, which finished 2-1, became the first team in Athletes Unlimited Basketball history to win a game without trailing at any point.

Team Russell’s starters accounted for 69 of the team’s 79 points with four players reaching double figures. Joining Russell in double figures were Lexie Brown, who finished with 16 points and 9 rebounds, Taj Cole with 14 and Laurin Mincy with 13.

“The whole week we focused on one quarter at a time,” Brown said. “We kind of let one of the quarters get away from us, but we just all locked in and we knew that we had to get it done defensively, and we knew that they were short on numbers and they were gonna run out of gas.”

Team Mitchell had five players in double figures, with captain Kelsey Mitchell and Tianna Hawkins each scoring 14 to lead the charge. Hawkins also grabbed a game-high 11 rebounds to register her second double-double. Rebecca Harris came off the bench to score 13 points and had 8 rebounds, Danni McCray had 12 points, and Air Hearn chipped in with 11.

Team Mitchell made a late push when Harris canned a pair of 3-pointers and McCray followed to complete an 8-0 run to get within five with a little more than a minute left in the game. But Brown hit a technical foul free throw, and Cole hit back-to-back buckets to put the game out of reach and put Team Russell up by 10.

Team Russell wasted no time in establishing its dominance, bursting out to a 9-0 lead as Team Mitchell struggled. The lead grew to 20-6, led by Mincy’s hot hand. Team Russell finished the first quarter hitting 55.6% (10 of 18) from the floor, while Team Mitchell struggled to 27.8% (5 of 18) shooting. Mincy was 2 for 3 from 3-point range and had 8 points after one. Team Russell scored 26 points in the first quarter, matching a league-best for points in the opening frame.

With their team captain on the bench, Team Mitchell got a boost from Hawkins, who scored eight points in the second quarter to help close the gap. Team Russell’s 13-point lead after one shrunk quickly, as Team Mitchell went on runs of 8-3 and 15-6 to get within two, at 38-36. Team Russell, which finished the half hitting 16 of 38 (42.1%) from the floor, held a four-point lead at halftime, 40-36.

Russell took charge in the third quarter, scoring eight points during a 17-9 run that pushed Team Russell in front by 12 late in the period. Consecutive buckets by Hearn, McCray and Hawkins brought the deficit back down to six until Team Russell took a 61-53 lead into the final quarter.

“Basketball is a game of runs,” Mincy said. “We have so much talent in this league and definitely on our team. The chemistry was just there from the beginning. We have so many options, so many weapons. Tonight I caught fire early, then we had Mercedes come in and give us some key buckets, and Taj down the stretch. We just kept pushing and staying together throughout the whole game.”

For Mitchell, as much as she wanted to win and experience victory with her first set of teammates, she was happy with the camaraderie and chemistry they built and will carry that with them to next week on their new teams.

Notes: Harris earned 90 points for MVP 1 honors, leading Team Mitchell with 261 points for the game. Her captain, Mitchell, took the MVP 2 spot for 60 points and 150 points overall. Brown was voted MVP 3 for 30 additional points and finished with 445 on the night. Team Mitchell won one quarter, giving each member 50 win points, while Team Russell won three quarters and the game for 250 win points.

Topping the leaderboard at the end of Week 1 is Natasha Cloud with 1,451 points. She will captain the Gold team for Week 2. Brown, who tallied 1,315 points, will captain the Orange team. Isabelle Harrison (1,291 points) and Russell (1,050 points) will captain the Blue and Purple teams, respectively.