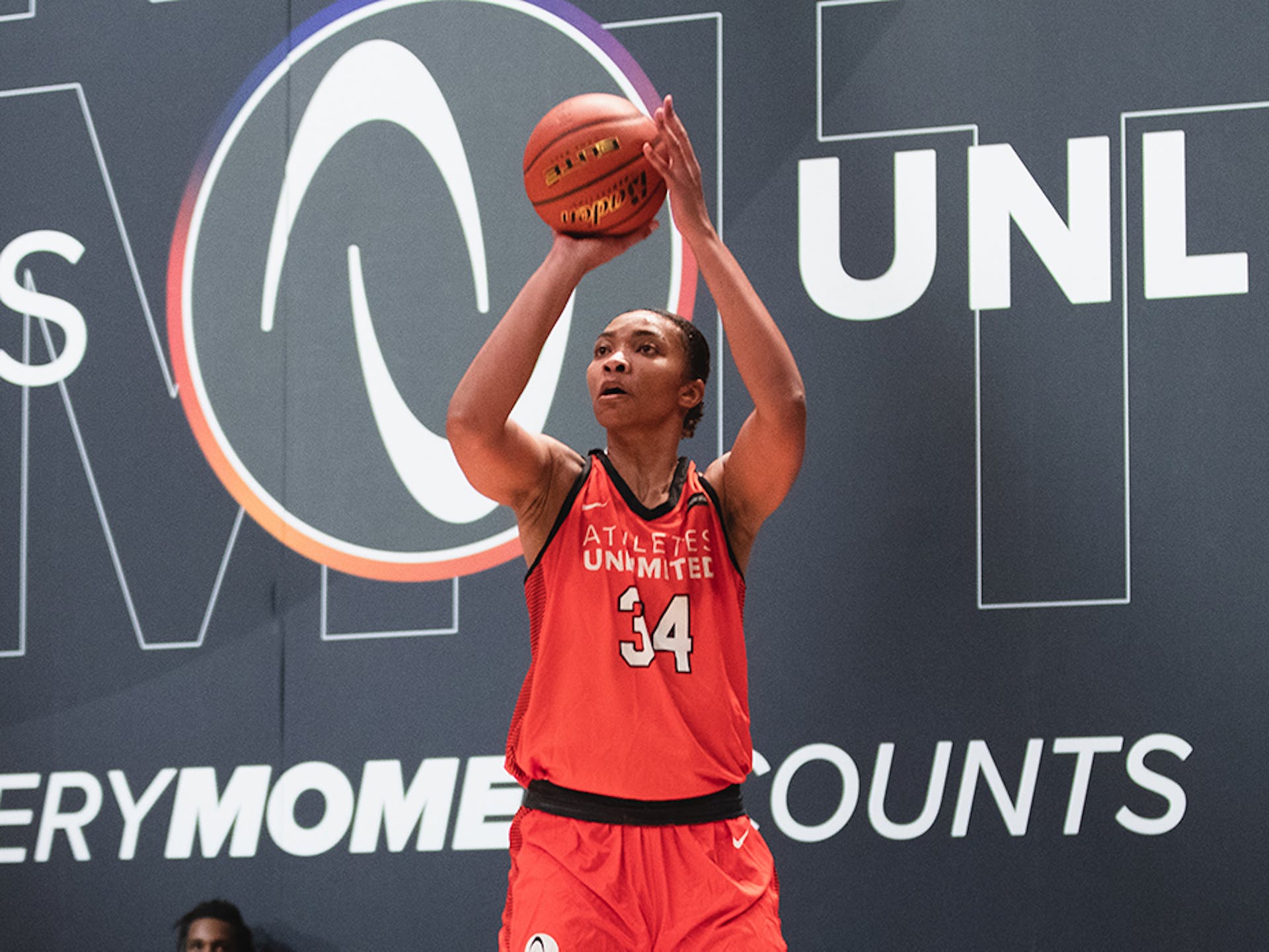 LAS VEGAS — She may not have been the leading scorer Wednesday night, but Imani McGee-Stafford seemed to be the spark Team Cloud needed from every aspect on the court.

McGee-Stafford registered her first double-double of the season with 18 points and 15 rebounds to help Team Cloud defeat Team Harrison 88-78 to open Week 5 at Athletes Unlimited Arena.

“I just think you can’t replicate game time and I just keep trying to show up and be good,” said McGee-Stafford, whose 15 boards set a new league single-game high. “And thank God I have teammates that believe in me and give me the opportunity to be great.”

DiJonai Carrington overcame her sloppiest performance of the season, having turned the ball over seven times, and still led Team Cloud with 22 points, marking her league-leading 10th game with 20 or more points. Carrington also extended her streak of double-digit scoring efforts to 13 games in a row, the longest streak in the league. Natasha Cloud had 21 points and nine assists while Jantel Lavender finished with 16 points and nine rebounds, and MeMe Jackson contributed with 10 points.

Odyssey Sims led Team Harrison with 22 points and seven assists. Courtney Williams scored 21 points and Isabelle Harrison chipped in with 17 points and 10 rebounds, her fourth double-double of the season. Harrison reached double figures in scoring for the 10th time in 13 games this year.

Team Harrison’s starters scored 73 of the squad’s 78 points with guard/forward Ty Young (3 points) and forward Kiki Harrigan (2 points) accounting for the five bench points. While Team Harrison finished the game hitting 30 of 65 (46.2%) from the floor, it struggled mightily from 3-point range, hitting just 3 of 16 (18.8%).

Though Team Harrison fell behind by as many 25 points early in the third quarter, a late surge in the fourth thanks to three consecutive buckets by Williams cut Team Cloud’s lead to three, 79-76 with 2:38 left in the game. But Team Cloud closed the game on a 10-2 run to provide the final margin.

“I feel like this is the week where everybody is trying to move up on that leaderboard, everybody is trying to showcase what they have in this last go-round,” said Lavender, who reached double figures in scoring for the seventh time in her last eight games. “I think the refs were letting us play a little bit and you saw it get more physical than normal. … I think we handled the adversity really well tonight and we stayed together and we scored when we needed to score, so, that’s how we came out victorious.”

After an evenly played first quarter, and the teams playing to a 22-all tie, Team Cloud was sparked by McGee-Stafford, who scored the first six points of the quarter and 12 of her team’s first 19 points. Team Cloud used a 19-4 run to open a 41-26 lead. Cloud caught fire midway through the run and closed the half scoring 11 of her team’s final 23 points.

McGee-Stafford had her first double-double by halftime, with 14 points and 11 rebounds in the first 20 minutes. Four players on Team Cloud were in double figures by halftime, along with Cloud, who also had 14.

“This is who I am, I haven’t been able to show that yet,” said McGee-Stafford, who also had three assists and a blocked shot. “So, I’m happy before we go out, y’all finally seein’ Imani.”

Team Harrison wouldn’t back down, however, as it opened the third quarter on an 18-8 run to climb back into the game behind a balanced scoring attack from the likes of Harrison, Williams, Sims and Kirby Burkholder. With Team Harrison closing in on Team Cloud and cutting the deficit to eight, at 63-55, Carrington found her touch and scored the final seven points of the quarter to give her squad a 70-57 lead heading into the final period.

KEY MOMENT: Team Cloud sprinted out of the gate in the second quarter with a 19-4 run in the first 5 minutes, 45 seconds to take a 41-26 lead it did not relinquish. Team Harrison closed the gap to 79-76, but Team Cloud scored nine of the final 11 points to secure the victory.