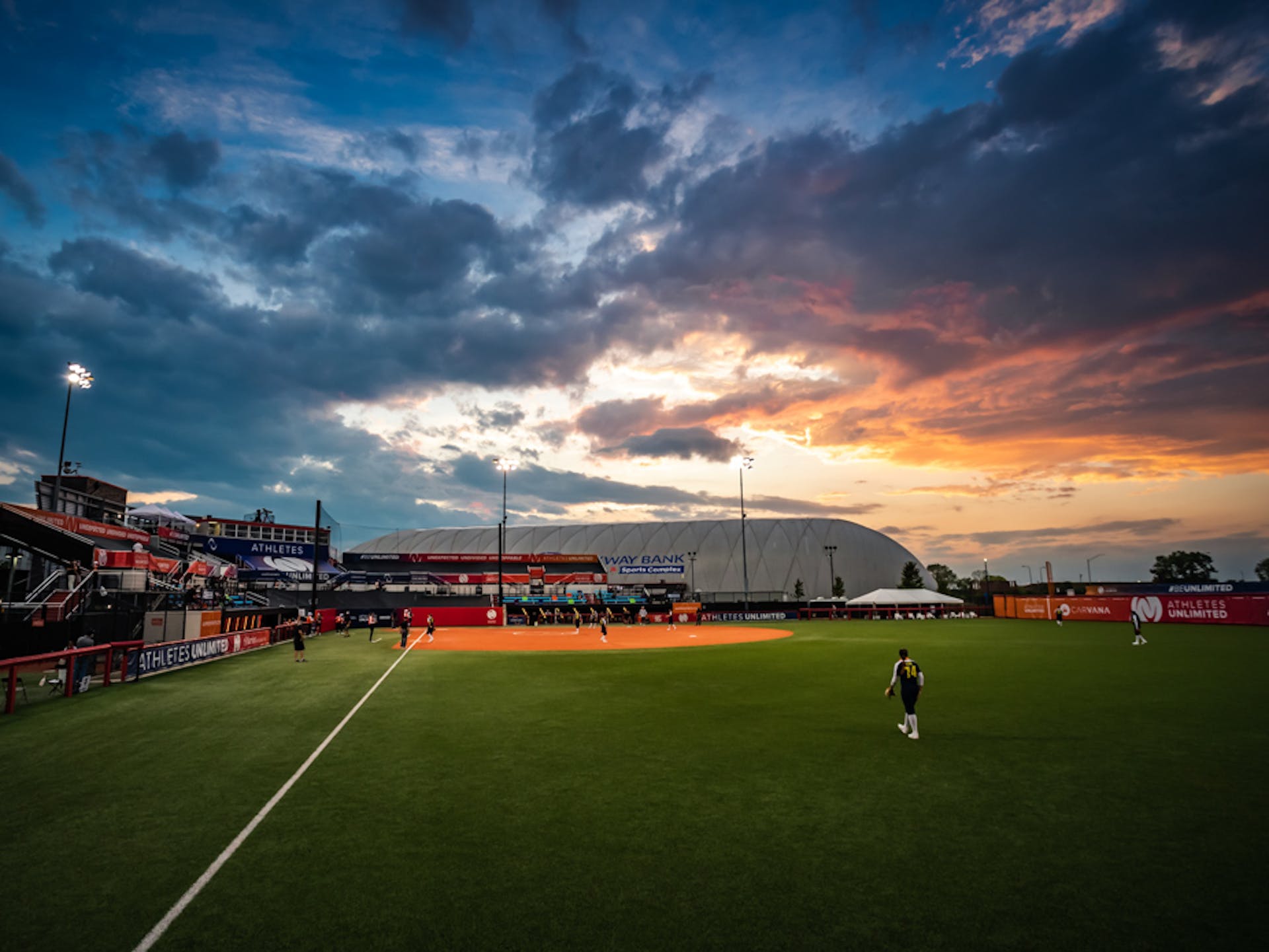 The only way to describe the past weekend in Rosemont, Illinois, is “whirlwind” – in more ways than one.

Athletes Unlimited conducted open tryouts for its 2021 Softball season, the first such tryout camp for any of its three sports – softball, volleyball and lacrosse – this past Friday and Saturday.

The final two games had to be moved indoors to the dome next to the main stadium at Parkway Bank Sports Complex because of heavy rains – rains that came amid an epic midwestern drought.

Even though the dome kept players and spectators dry, it could not prevent a short delay and evacuation because of high winds that could be heard howling from inside. For a brief moment or two, those inside the dome didn’t know if the noise came from a plane flying in or out of nearby O’Hare airport or from a freight train.

“Y’all have tornadoes here, right?” asked one waggish player when it became apparent the noise was entirely caused by the region’s well-known weather behavior.

Umpires halted play, and those inside the dome scurried for the lobby, where players posed for an impromptu team pic and some additional bonding.

The all-clear sounded, and play resumed and concluded, leaving decision makers with the unenviable task of deciding who, if any, of the players would be offered contracts for the upcoming season, which begins in Rosemont on Aug. 28 and runs through late September.

What does it say about Athletes Unlimited that so many players would travel to the Chicago area to compete for so few precious spots?

“That’s the really special part about it, because I think that what Athletes Unlimited has done through softball and through volleyball – and you’ll see it in lacrosse – is build a reputation,” said senior director Cheri Kempf. “And it’s the experience. I think these athletes realize that this is something special, and it’s something that we haven’t seen before. I think that everybody not only wants to play softball at this level but just wants the Athletes Unlimited experience overall.”

Kempf opened the proceedings Friday by welcoming players on the main field.

From there, she turned the proceedings over to facilitator Lauren Lappin, a dynamo of energy who put players through their paces at each skills station. She had one piece of advice for those trying out.

The players took note of Lappin’s birthday Saturday morning and properly serenaded her.

Participants came from all backgrounds – from powerhouse softball universities to mid-majors in NCAA Division I to Division II schools, Historically Black Colleges and Universities to junior colleges.

“You know what?” Kempf said. “That’s our core. Athletes Unlimited’s core is to make sure that we are broad and wide. I think that, to me, is one of the things that we as an organization should be very proud of – A., that they want this experience and that they’re willing to spend their time and effort and energy to get here and do the tryout. And, B., the opportunity exists for anyone here.”

The games were played with much of the same intensity as games played in Athletes Unlimited’s inaugural season last year, with plenty of chatter on the field to go along with diving catches and a few well-struck home runs.

Kempf told players after the final game that up to four players from the group of 25 could be offered contracts, based on evaluations from the weekend. Also factoring into the decisions are how many players from 2020 return, how many recent draft choices sign contracts and how many free agents sign to play for the 60 spots that will be spread among four teams.

Also figuring into the final decisions – over which members of the Player Executive Committee will have input – are positions where numbers are needed.

Evaluators were looking at several things during the drills and scrimmages.

“I think the difference makers are going to be bat speed and consistency,” Kempf said. “I think that what you’re looking for in a tryout is consistency in different formats. You’re seeing hitters in the batting cage, you’re seeing them in BP (batting practice) and you’re going to see them live to show you a really good sampling of what they’re capable of.

“A lot of times, it’s just like any other sport. Typically when you go from college to pro, when you hit that highest level, I think it’s all about the ability to be as fast as the game is at that level.”

At the end of the weekend, both Kempf and Lappin thanked the tryout participants and applauded them for coming out. Almost all of these players were stars at the high school and college levels. The higher level of competition, the more difficult it becomes to make it.

“The biggest hurdle is the density in talent,” Kempf said. “When you look at 60 players, think about college softball and how great it is. You’re going to hone that whole thing down to 60 players. That is a very densely talented pool of athletes from the pitcher’s mound to the batter’s box. That is, I think, the toughest challenge at the professional level, period.”