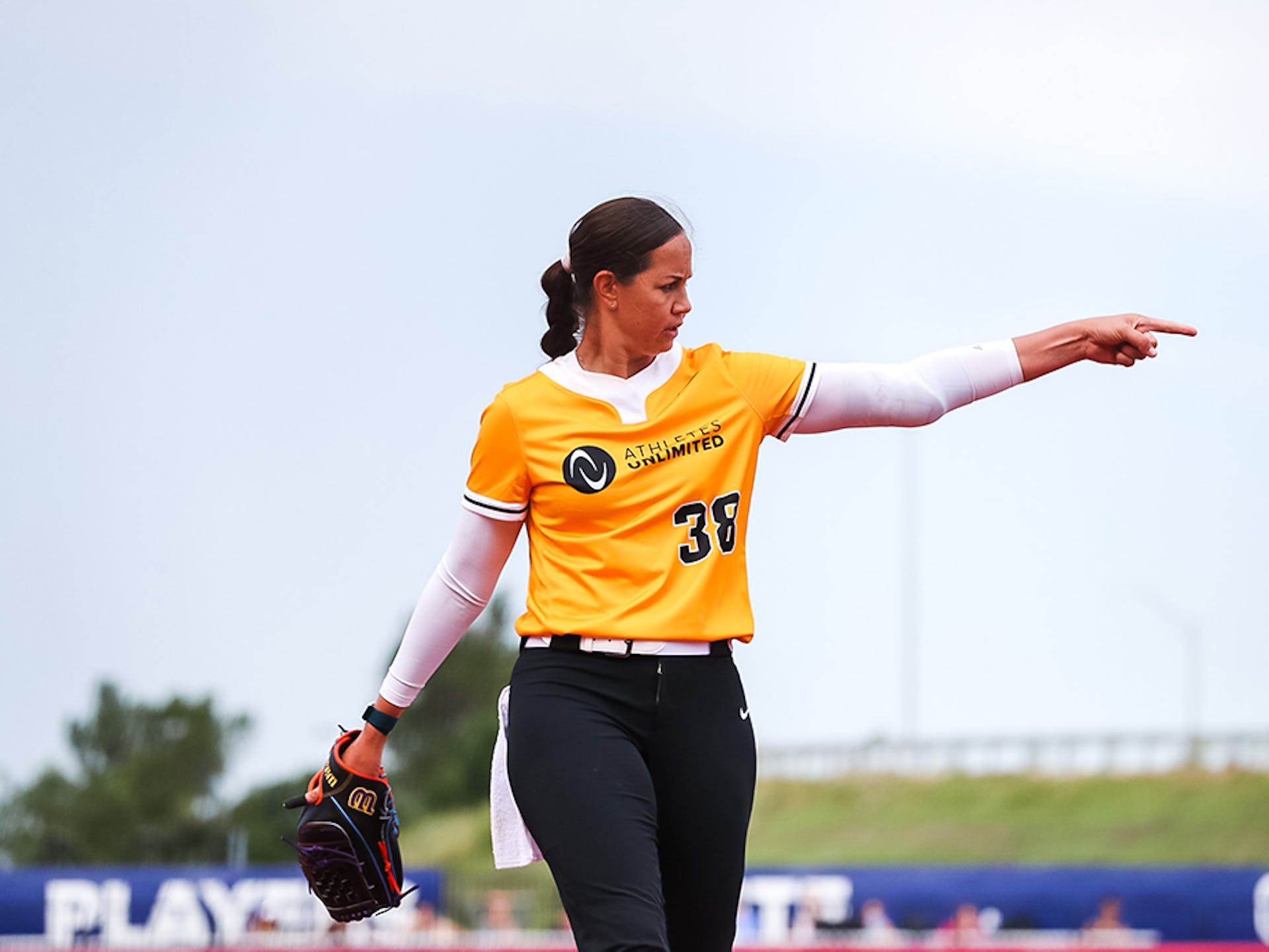 The capricious Chicago-area weather brought the rain and lightning Sunday.

The 38-year-old (but ageless, really) lefty and softball legend tossed the first no-hitter in the history of Athletes Unlimited as the Gold team she captains beat Team Hayward (Blue), 6-1, in the second game of Sunday’s doubleheader at Parkway Bank Sports Complex.

The only run Osterman allowed came in the third inning, the result of a walk and a one-out sacrifice fly.

In her seven innings of no-hit work, Osterman walked two, struck out five and hit a batter. She faced 25 batters and threw 97 pitches one day after getting a save. There two errors in the field behind Osterman.

When Osterman struck out DJ Sanders to end the bottom of the first inning, it was her 100th career strikeout in Athletes Unlimited, which began play last year.

Interestingly, Osterman said she didn’t feel her best at the start of the game. Then she had to wait out a 1-hour, 1-minute rain and lightning delay in the middle of the fifth inning.

“When the game started, I didn’t feel that great,” she said. “I was throwing a little bit inconsistent. But Dejah (catcher Mulipola) was doing a great job back there for me. During the rain delay, I just kind of rested, stretched my arm out a little bit. As you noticed, I took my sleeves off. I felt like they were a little too tight, maybe. I don’t want to blame that.

“I felt looser once I got them off. But (I) just relaxed. I got off my feet. I think sometimes I don’t take into account coaching first base probably tires me out a little bit. Mentally, I just tried to figure out what I wanted to do differently going back out there once the break was over.”

Whenever a pitcher in softball or baseball pitches a no-hitter, she or he is always asked about being aware of it.

“Yeah, I knew that,” she said. “I was just trying to think more of keeping runs scoring more than anything. My defense was going to work behind me.”

It eventually dawned on Osterman’s teammates that something special was happening.

“In the fourth or fifth inning, I kind of looked up at the scoreboard, and I was like, ‘Is that a zero? Wait, has anybody gotten a hit?’” said first baseman Tori Vidales. “So I was just thinking in my own head.”

The Chicago-area weather struck for a second straight day. This time, lightning sirens sounded in the middle of the fifth, forcing players, fans and staff to evacuate. Heavy rain followed.

Before that, Team Osterman (2-0) wasted no time getting on the board, with two in the first inning. Aliyah Andrews and Haylie McCleney opened with singles to start the inning, and they were sacrificed ahead by Sahvanna Jaquish. Vidales brought them both home with a double to right-center for a 2-0 lead.

Team Hayward (1-1) got a run without the benefit of a hit in the bottom of the third. Jordan Roberts walked to lead off, and speedy pinch runner Morgan Zerkle stole second and third bases. After Osterman struck out Sis Bates, Hayward drove Zerkle home with a sacrifice fly to center.

It was a tight ballgame until the top of the seventh, when Team Osterman put across four runs, two unearned. A big play was a sacrifice fly and error off the bat of Aliyah Andrews, the game’s MVP 2. Vidales took home MVP 3 honors.

For her part, Andrews said she enjoyed playing left field behind Osterman.

“It’s easy,” she said. “I feel like things are in control. No matter what, I know I need to play behind her and make some plays just because she’s going to get some balls easily hit to us. Just doing my job and knowing she’s going to do her job, too.”

With 234 total points for the game, Osterman moved up to her accustomed top spot on the Athletes Unlimited leaderboard, with 370 points going into Monday night’s play.

AU in Tokyo: Cat Osterman strikes out nine in return to Olympic stage