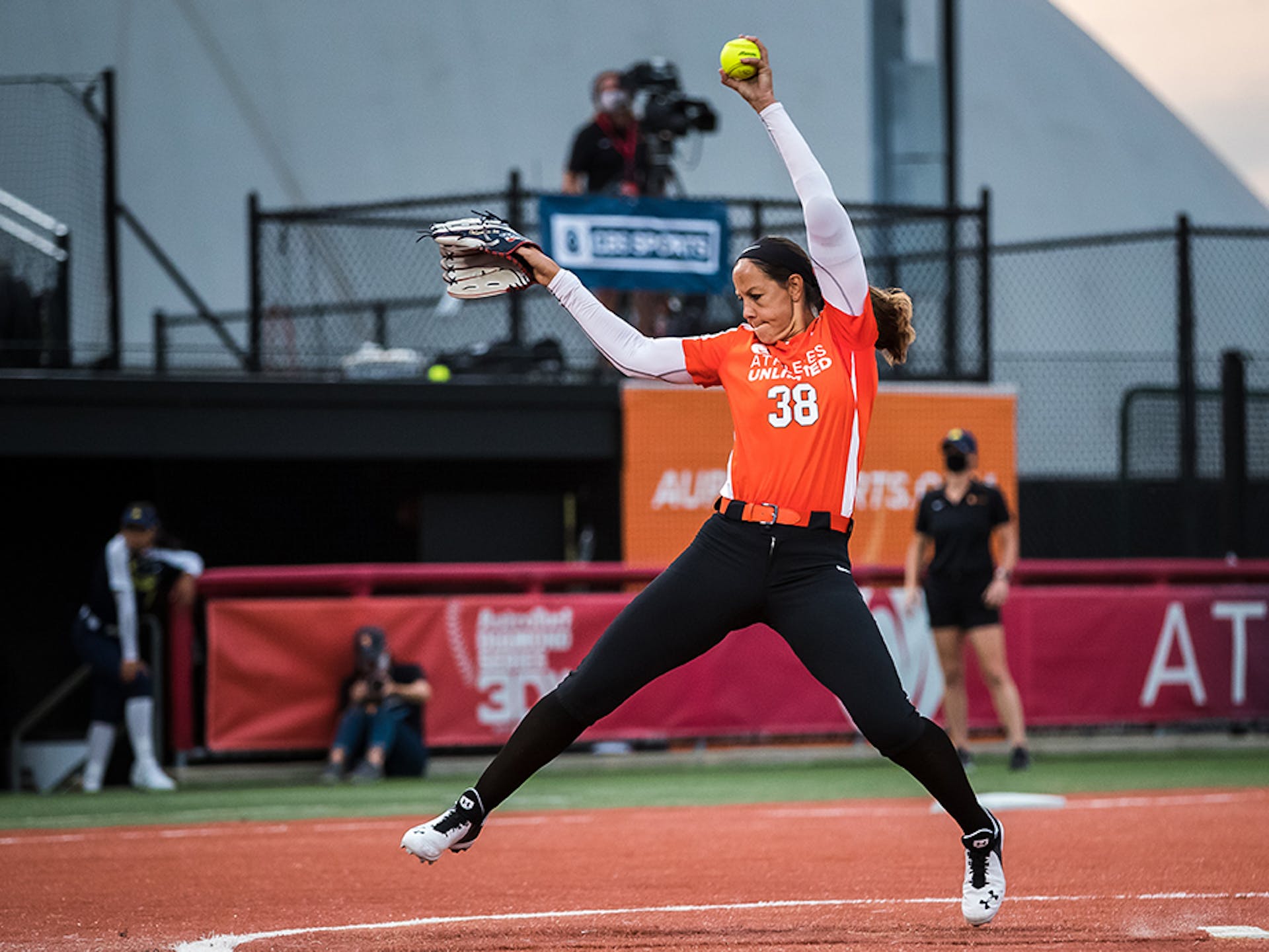 If anyone is suited for the bright lights of prime time, it’s Cat Osterman.

Osterman closed out the first week of Athletes Unlimited softball by taking matters into her own left hand and tossing a complete-game 5-0shutout for Team Warren over Team Wagner Monday night at Parkway Bank Sports Complex.

The 37-year-old faced only minor trouble as Team Warren went 3-0 from Saturday-Monday. Team Wagner finished the round 2-1.

Osterman struck out 11, including a dropped third strike in the ninth inning that forced her to face one more batter. Jazmyn Jackson flied out to end the game, and Osterman had a two-hitter.

As the result of Athletes Unlimited’s innovative scoring system, there will be four new captains to draft teams for next weekend’s second round of games. That draft takes place Tuesday, Sept. 1 at 6 p.m. ET/5 p.m. CT.

Perhaps the only down side is that this winning band of Warren players will be broken up.

“Yeah, I think we knew going into the game that the band was going to have to get broken up a little bit,” said Osterman, who was named MVP 1 for Monday’s game, earning her 60 points. “We’re hoping it’s only for a week and then maybe we can find our way back to each other. But obviously super proud of the performance Vic’s had this week. Unfortunately with Week 1 and not a whole lot of mixing up yet with the points, we kind of knew it was going to happen.

“I think that it tears at our hearts a little bit, but we’re also super proud for each other. I know that I can speak for all three of us that this first team will probably go down … we’ll all hold it very close to our hearts for the rest of time, I think, but definitely the time here.”

The Team Warren offense gave Osterman all the support she needed with single runs in each of the first two innings against Team Gold captain Haylie Wagner. Four singles in the first did the trick. Aubrey Leach’s second single of the game drove in the run in the second inning.

Hayward hit a booming home run to the cover on the right-field bleachers to lead off the fifth. In the sixth, Janie Reed doubled, and she came in on a two-run homer by Katiyana Mauga in the sixth.

But this night belonged to Osterman. She hit a batter and walked one in the second, but for the most part, she cruised.

“I think the biggest thing [is that] Gwen (Svekis, catcher) and I have been on the same page, both in the scrimmage (last week) and the first two games we’ve played together. That helps when you can be on the same page as your catcher. But a little bit of everything, to be honest. I was trying more so to pitch to contact and get them to swing early, and if they got flyouts and groundouts, so be it. If strikeouts came, that was fine. But I think getting older, your mindset has to change a little bit so my shift in mindset wasn’t, ‘How many strikeouts can I get tonight?’ It was just, ‘Get us off the field as quick as possible.’”

So now the four captains will have until late Tuesday afternoon to prepare for the draft and try to select teams as good as the two that were on the field Monday night.

“I’m on the player executive committee, so I have been in mock drafts,” Hayward said. “But the real thing has proven to be much more impactful, and things can really go wrong if you don’t pay attention. I was already starting to think in the seventh inning. I didn’t know that I was going to be the second captain (from Team Warren), so I’m really proud about that. I think we learned a lot this first week about the importance of elite pitching. Our team had Cat and Aleshia Ocasio who both threw gems, which kind of let the offense do what we needed to do without a lot of pressure on us. Pitching is huge.

“And clutch hitting, hitters that can hit. And good defense. You’re really looking for well-rounded players. There were a lot of really good performances. It’s going to be really tough to put a good team together. We have really high expectations after this first week.”

Volleyball: Where to Watch Week 4