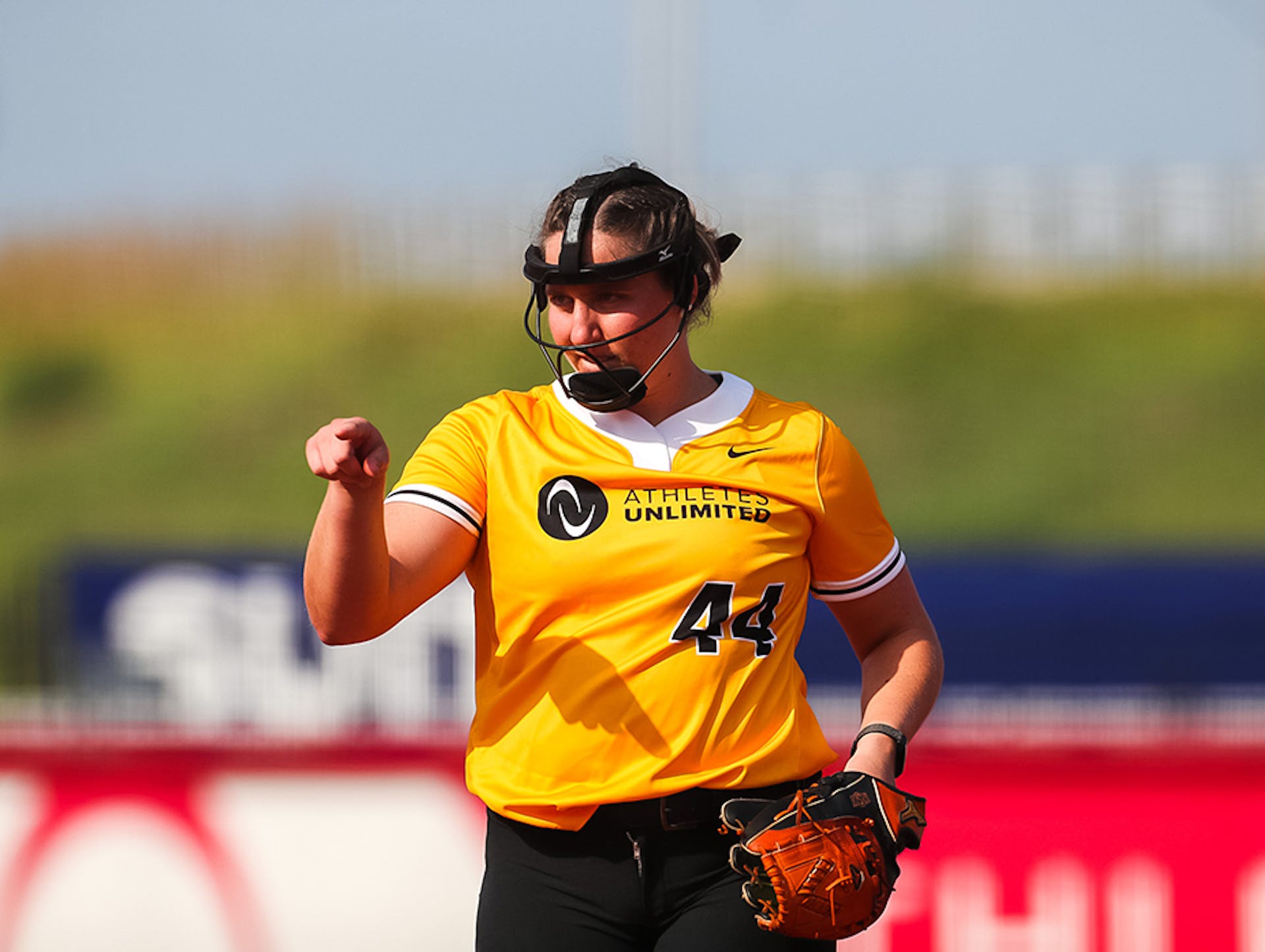 Every season has its unsung heroes and unsung role players.

In Athletes Unlimited Softball this year, that title may just belong to pitcher Carrie Eberle. The rookie right-hander has excelled as both a starter and as a reliever over the first four weeks of play.

After starting Saturday night, Eberle came back late Sunday afternoon to start again. She wound up tossing six innings of five-hit ball in leading Team Chidester (Gold) to a 6-1 victory over Team Osterman (Blue) at the Parkway Bank Sports Complex.

In two days, she worked 10 innings, allowing just one run.

“It’s been a lot of fun,” said Eberle, who improved to 1-1 and took home 60 bonus points for being vote MVP 1 of the game by her peers. “It’s been fun to pitch kind of a different way just because of elite hitters and having to use more of my pitches. It’s been fun to develop relationships with all of the catchers, so it’s been a great experience.”

Eberle outdueled Blue captain Cat Osterman, who worked four innings and gave up four hits and four runs. The formula for Eberle was a familiar one: get a lot of groundball outs. In her six innings, she got 11 outs via the ground.

“I think it was just locating well today and was mixing in the change and off-speed, which helps make the drop more effective, because people just can’t sit and get their plane of the bat there all the time,” she said. “I think that was the key to success today.”

Team Chidester jumped on Osterman for three runs in the first inning. Captain Amanda Chidester led off with a walk and went to second on Haylie McCleney’s groundout. Ali Aguilar doubled past left fielder Bubba Nickles to score Chidester.

Osterman struck out Anissa Urtez, but Morgan Zerkle pulled a pitch to right for her third home run of the season.

Getting off to a quick start against Osterman was important, according to Aguilar.

“It’s so important,” she said. “As early as you can get the momentum, especially with her on the mound, that’s great. Me getting the hit and Zerk coming through with the home run was huge momentum for us in the first inning.”

Zerkle was the MVP 3 of the game. Any home run off a pitcher of Osterman’s caliber is special.

“Of course,” Zerkle said. “Cat’s a great pitcher and very experienced. To be able to have that success definitely feels pretty good. It’s what you’re working for, to be able to hit off of everyone.”

Chidester led off with a walk in the third and she later scored on Urtez’s single. Right fielder Kayla Wedl ran in and made a sliding attempt for the ball, but she couldn’t come up with it. Osterman worked out of it from there on a forceout at home and a double play.

Team Gold added a pair in the fifth on a two-run double by Urtez. After being named MVP 1 Saturday night, Urtez picked up 40 bonus points Sunday for MVP 2 honors. She told the crowd after the game that she was happy to spend the day with family as Athletes Unlimited celebrated Hispanic and LatinX Heritage Month with a day of special activities.

Team Osterman threatened Eberle in the sixth, loading the bases with nobody out. A leaping stab of Dejah Mulipola’s liner by Urtez turned into a 6-4 double play. Team Osterman did score on a wild pitch, but Eberle shut it down from there before giving way to Sara Groenewegen for the seventh.

As far as the infusion of young talent that has come into Athletes Unlimited, two-year veteran Zerkle applauds it.

“It’s awesome,” she said. “I think that’s the kind of atmosphere you want in a league like this. You want the most competitive players from rookies to veterans, all the way up. It’s really awesome to see younger people do well, and it’s great for our sport, as well.”