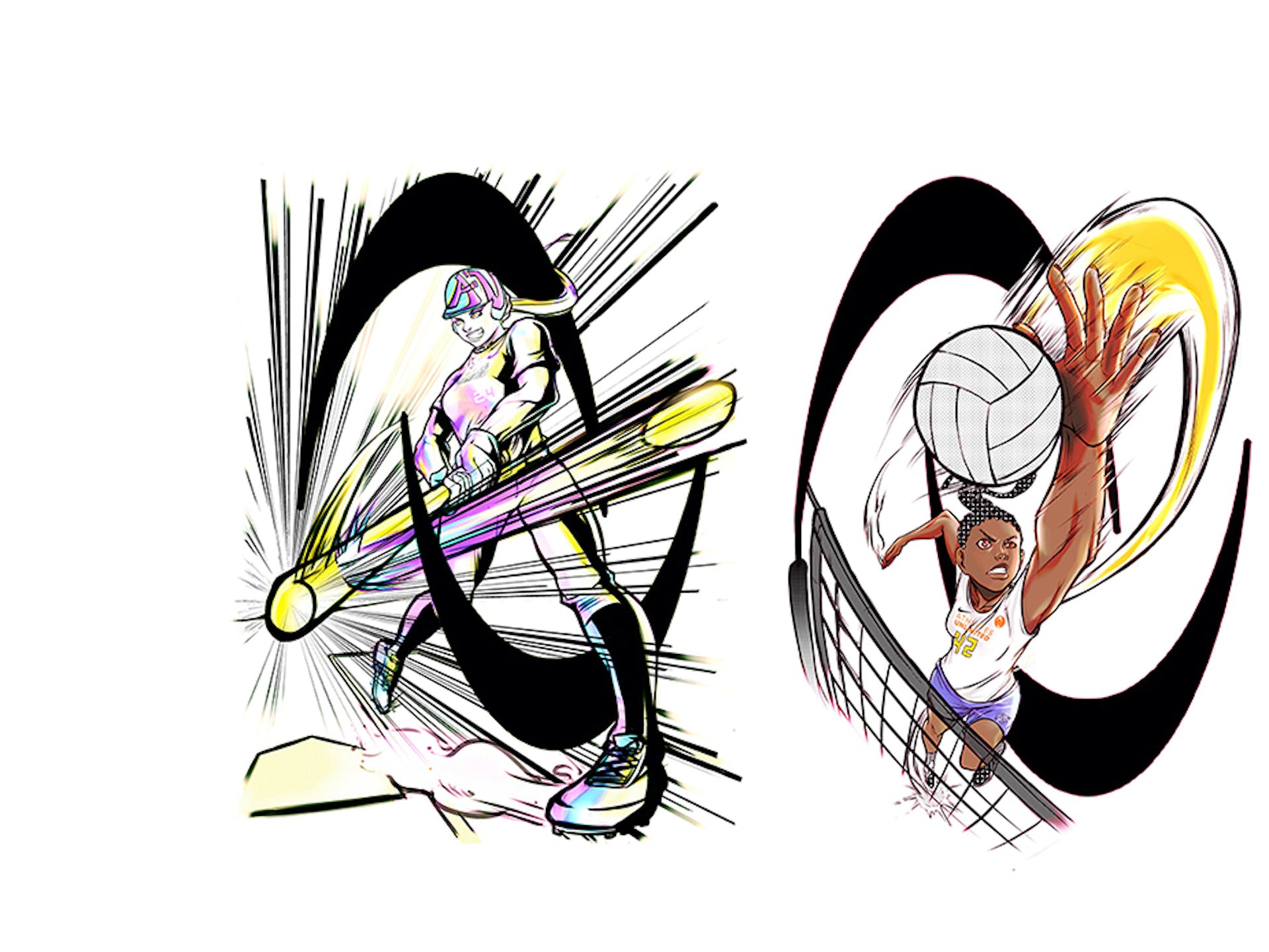 When you think of what it takes to make a sports league official, your mind probably gravitates to the players, executives, fans, and, maybe, sponsorship rights. While you certainly can’t do away with any of those elements, there’s one aspect of birthing any sports franchise that really takes it across the board from dream to reality: the swag.

Nothing feels quite the same as slipping on a crisp new shirt with your favorite athlete’s number emblazoned on the back, or walking around with an ode to your sport front and center. Swag is essential. When it came time to make the Athletes Unlimited merchandise, it was clear the designs needed to represent the strength and passion of the athletes. That’s when league officials turned to Cameron Gipson, also known as Stoic Lotus, a Brooklyn-based comic artist with a knack for illustrations.

“Strong, cool, and beautiful was the [idea] going forward,” said Gipson, who drew on inspirations from anime to create the comic-like designs of a pitcher, batter and volleyball player that are now in the Athletes Unlimited store.

His designs channel a superhero ethos while remaining grounded in the physicality of sport. Achieving this look was something Gipson said took trial and error.

“The poses were definitely the most difficult part of this entire process,” he said. “One of the issues I had was really making it look authentic, but also at the right time, like finding what angle it is that I’m supposed to take that would make it look very powerful and also correct.”

Gipson watched slow motion videos of athletes to understand how their bodies move and react on impact. Then, he began drawing the characters digitally, remaining mindful of how the scene he was creating would come together for a viewer. Gipson’s final rendering shows a volleyball player in action, suspended in that moment in time just before what one can imagine is an epic smash.

Gipson had to do all of this while creating images that could stand for all female athletes and didn’t resemble only the Athletes Unlimited players whose videos he was watching to create the original illustrations.

“Any time it started to look like somebody we had to change things up a bit,” Gipson said.

Each of Gipson’s final designs seems to tell the story of an athlete in motion, an inclination of his that stems from his background and passion for comic book illustration and cartoons. Gipson is currently a student at the School of Visual Arts, majoring in cartooning.

“I think stories are the most powerful force there is, almost, because narratives and stories really change how people think,” he said. Like the plot of a good cartoon, Gipson notes that this force that stories have can be used for the good of society or for its downfall. “Stories can sometimes be more powerful than facts,” he said.

Gipson’s obsession with telling stories visually has led him to admire what comic book illustrations can achieve. “Being a serialized comic book artist would be the grand goal,” he said. For now, he’s starting his career with getting to understand the characters that drive his stories. In addition to the sports characters he created for Athletes Unlimited he has his own personal archive of characters he’s constantly working on.

“I’m working on a few projects involving character design that possibly might be on a comic book at sometime in the future. I really want to be able to self-publish my own comic book story and really try to share my message,” Gipson said.

In the meantime, he’s proud of having contributed to the story of Athletes Unlimited by creating the fresh swag.