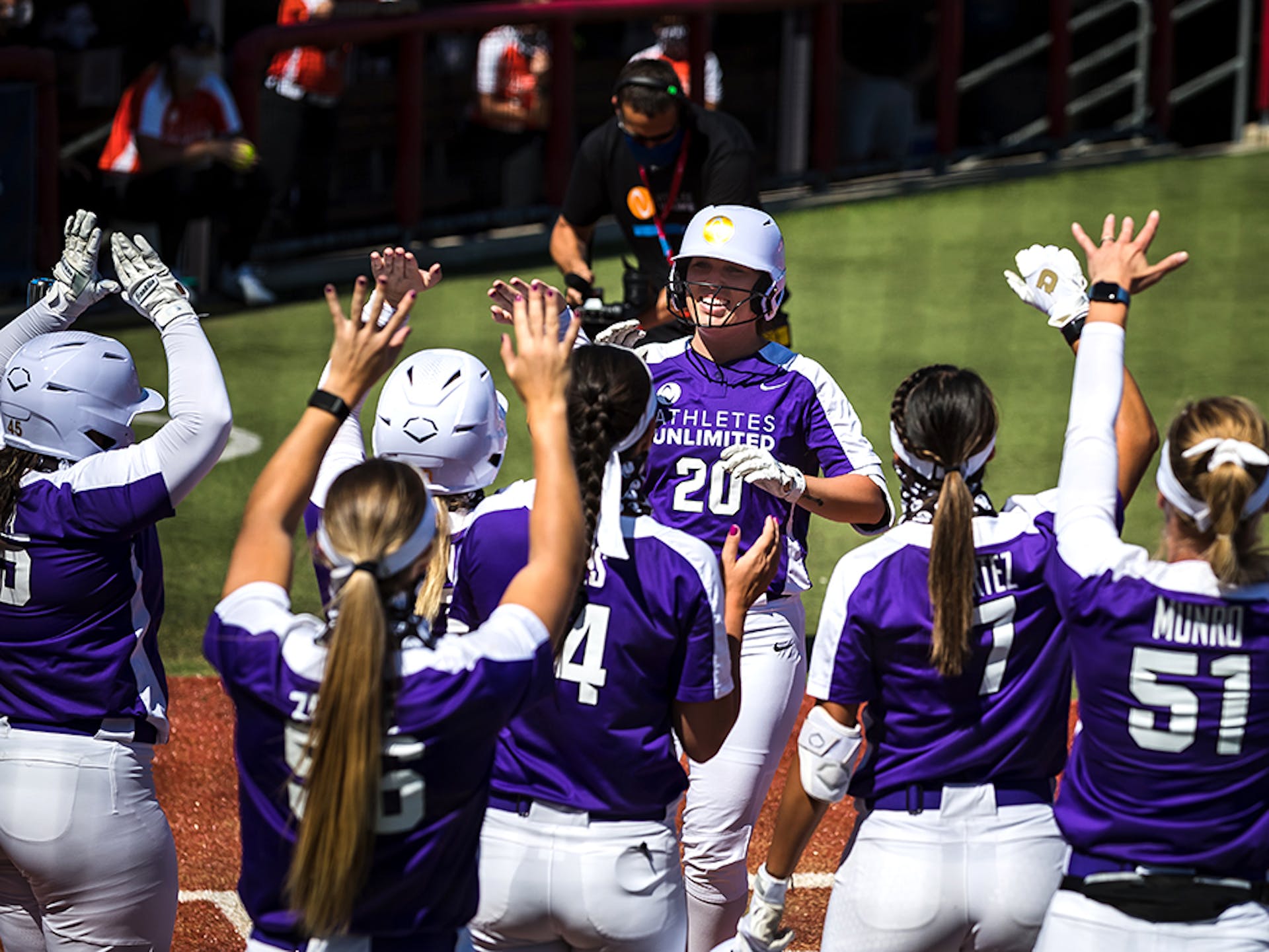 On any day at the Parkway Bank Sports Complex, one can sit and count the jets that fly into and out of O’Hare International Airport.

Batting in the top of the fourth inning with 40 points on the line, Clifton got a ball up into the jet stream for an opposite-field three-run homer. That proved crucial as Team Purple under captain Aleshia Ocasio held on to beat Team Orange, captained by Samantha Show, 6-4.

No doubt Clifton got all of it, but the ball got an extra boost from a strong breeze (21 mph) blowing from left to right. The ball kept carrying, and it traveled well over the bleachers in right field.

“Before that at-bat, I saw Nadia (Taylor) really get into one and sent it to left field, but it really didn’t go anywhere,” Clifton said. “I was thinking that if I did hit a ball to the right side that it might fly, but I wasn’t anticipating for that to happen. I saw an outside pitch and took it that way. I was head-down and running right out of the box.”

Team Purple needed its captain to stave off a rally in the bottom of the seventh inning, when Team Show scored three runs to make the game tight and interesting.

Ocasio started the game in the circle and pitched six innings before giving way to Kelly Barnhill in the bottom of the seventh. But Ocasio put herself back in with two outs and a runner on third. She retired Taylor Edwards on a pop foul to end the game.

“One pitch, that was fun,” Ocasio said.

Ocasio wound up pitching 6.1 innings and giving up eight hits and one unearned run. For her efforts she was named MVP-1, picking up a total of 256 points, 60 for the MVP 1 vote and 196 from the game. MVP 2 (40 points) went to Clifton (200 total points) and MVP 3 went to catcher Erika Piancastelli, who hit a three-run homer in the seventh for important insurance. She again worked well with Ocasio and earned 180 points.

“I think we just have a connection,” Piancastelli said. “We’re always on the same page. “We communicate really well in our bullpens, and think that helps me understand what she is as a pitcher and let her go to it in certain situations. And I think we also have that connection where if she doesn’t feel comfortable throwing a pitch, she’ll just shake me off . She trusts me, and I trust her. So I think it’s just a good vibe that we have together.”

Team Show picked up a run in the fifth. In the seventh, they got an RBI single from Aubrey Leach and a two-run homer from Megan Wiggins, who stroked one just inside the right-field foul pole.

With two outs, Barnhill gave up a triple to Amanda Chidester, and back in came Ocasio.

“I wanted to go as long as I could (as a starter),” Ocasio said. “They were hitting me late in the game. I decided to go with Kelly. We talked about me staying ready. It wasn’t for me to come in after one or two batters. It was that the situation called for it.”