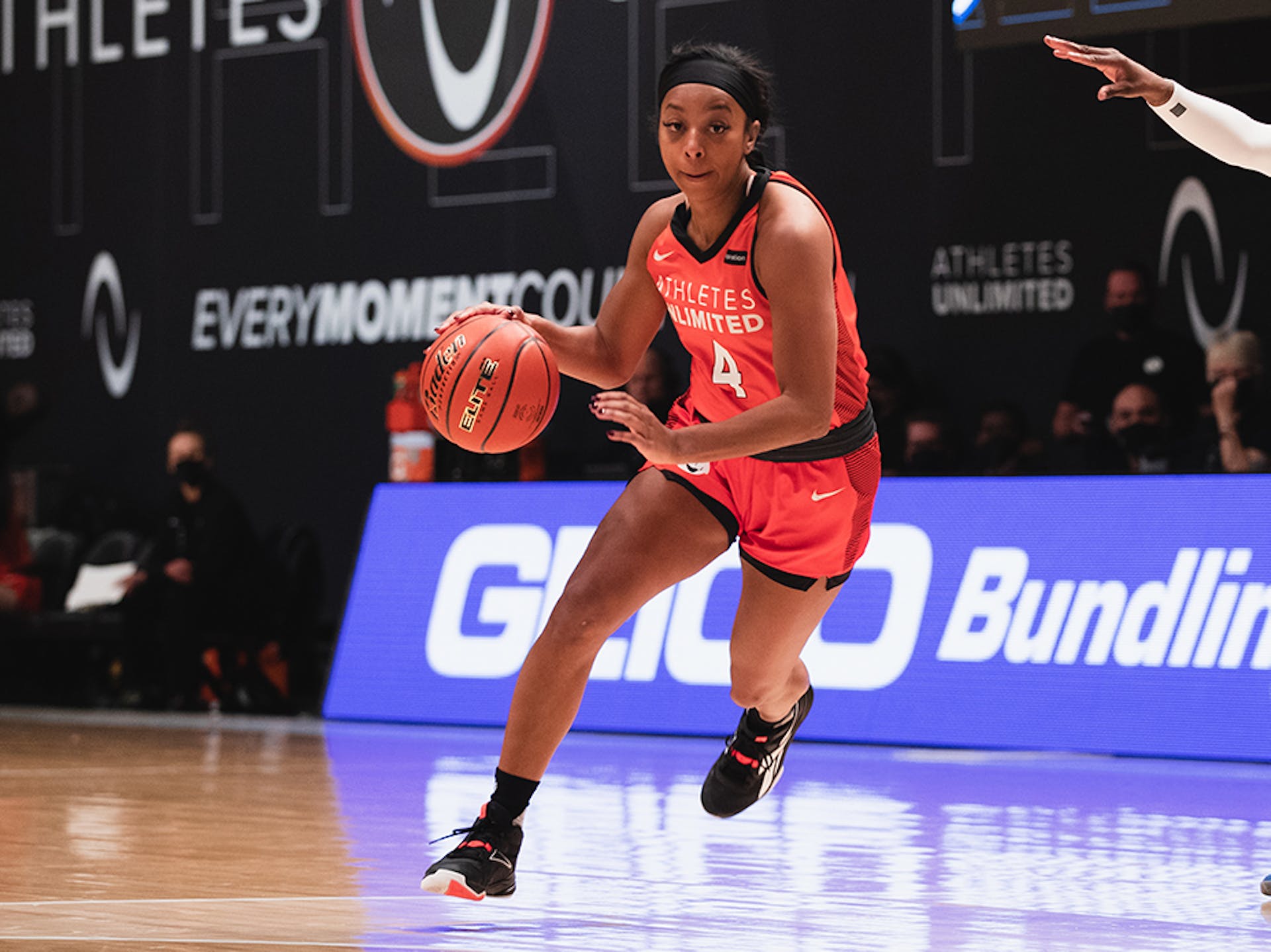 LAS VEGAS — Lexie Brown spent enough time during preseason scrimmages of the inaugural Athletes Unlimited Basketball season learning just how good the competition would be among 44 of the world’s best players.

Not as locked in defensively as she should’ve been, it was a wake-up call for opening night.

Brown had five steals to go along with her 19 points, while Taj Cole led all scorers with 21 points to lead Team Russell (Orange) to an 80-71 victory in the first-ever Athletes Unlimited Basketball game.

“I kind of came into the game really locked in defensively,” said Brown, who also scored the league’s first-ever points with a two-pointer. “Mercedes (Russell) told us in shootaround and practices that if we play defense we’re gonna win this game, and I think everyone bought into that.”

Team Russell had 12 steals and took advantage of 18 turnovers by Team Sims (Blue).

Team Russell also shot 41.7% from the floor, while limited Team Sims to a paltry 39.2% shooting performance.

Danni McCray had 11 points and 12 rebounds, while Russell registered a double-double of her own with 10 points and 11 rebounds.

Team Sims was led by Essence Carson and Briahanna Jackson, each with 15, while Odyssey Sims added 14.

“Once we got a little bit of the jitters out, Lexie started us off and we just kept the intensity and that energy for the rest of the game,” Russell said. “We did a real good job of keeping the intensity up, keeping the energy up for a full 40 minutes.”

After an expected slow start that followed an entertaining opening ceremony, Brown sparked the tempo by scoring eight of her team’s first 13 points.

Team Russell closed the first quarter on a 9-0 run – including five more from Brown – to take a 22-13 lead.

Brown’s defensive intensity dictated play at both ends throughout the first half, as she worked diligently in transition, was aggressive in cutting off passing lanes and kept the tempo in Team Russell’s favor every time Team Sims got close.

Team Sims shot just 38.4% in the first half, while Team Russell hit 40% from the floor over the first 20 minutes, despite hitting just 1 of 11 from 3-point range.

But Team Sims wasn’t going away that easy, making it a one-point game early in the fourth quarter, at 61-60 with 7:44 left in the game.

“Whenever we went on a run, the blue team came right back at us with so much energy,” Russell said. “The whole game was competitive between every single player.”

But the one-point game was as close as Team Sims would get, as Team Russell closed the game on a 19-11 run to provide the final margin.

“There are so many great competitors out there,” said Drew Edelman, who had six points and eight rebounds for Team Sims. “I think definitely the competition level is really high. Lexie and Taj (Cole) going straight down to the basket. It was high level to me.”

NOTES: Brown finished with 534 points on the leaderboard, broken out by 250 win points, 224 stat points and 60 points for being named MVP 2. Cole was named MVP 1 to earn an additional 90 points and 489 points overall. Russell was MVP 3 to add 30 points, bringing her tally to 348. Team Russell won quarters 1 and 4, giving each player an additional 50 points for each quarter, while Team Sims won the second quarter. The teams tied in the third quarter, making the fourth quarter worth 100 points for Team Russell. The players from Team Russell each earned 100 points for winning the game. Team Russell earned 250 win points overall, while Team Sims earned 50.

Lavender logs a double-double; AU in the WNBA 4 Roundup