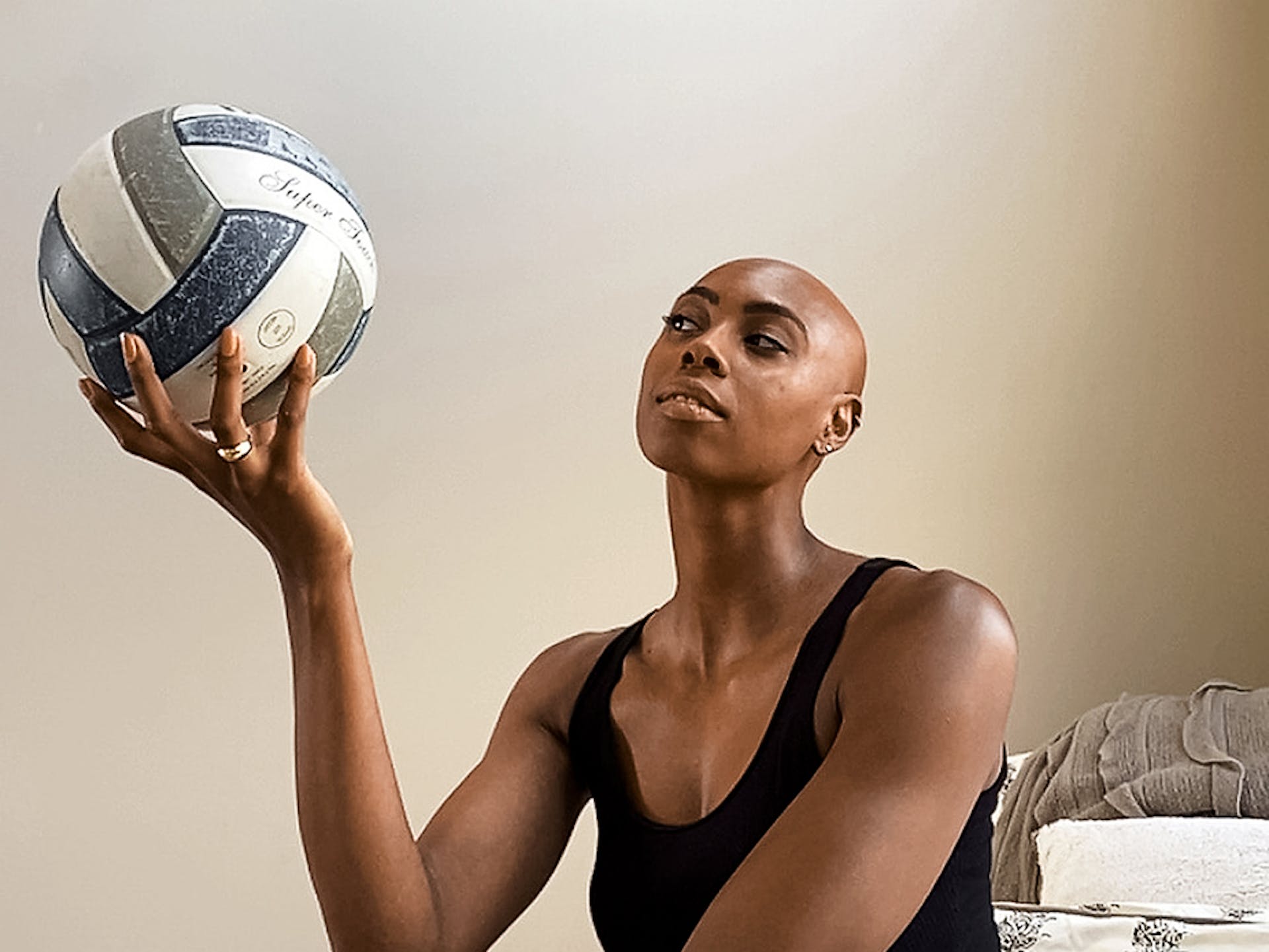 Deja McClendon cuts an impressive and distinct figure on the volleyball court.

It has always been so, dating to her days as a two-time NCAA national champion with Penn State and during a peripatetic professional career that has taken her to ports of call in Poland, Azerbaijan, Italy, Brazil and now, to Athletes Unlimited in the United States.

McClendon’s play as an outside hitter sets her apart. For the past year-plus, there has been something else: She has embraced being bald. And she has done so boldly and proudly.

The 28-year-old McClendon has alopecia areata, an auto-immune condition that causes hair loss. For McClendon, that meant dime-to-quarter-sized spots on her scalp, which otherwise was full of long hair. As 2018 was turning to 2019, she contemplated a life-altering decision: stop all treatments, shave her head and go bald.

She did so, and it’s now a look she sports proudly.

“I have had alopecia since I was 12,” McClendon said. “There are different stages of it. I had a mild stage called alopecia areata, where you only lose small, quarter-to-dime-size areas of hair. I was getting treatment for that since I was 12, which was essentially steroid injections, lots of little injections in that area. And then it will block your immune system and then your hair will start to grow back.

“I never had any issues hiding it. It was something that I internally thought about but I never really talked about. And I managed it. I think it was good for me at the time because I was still very much trying to figure out who I was as a woman. I didn’t think about not having it.”

“As soon as I got to Italy a couple of years ago, I told them I have this condition and this is how I treat it and this is the medicine I use,” she explained. “They were supposed to submit that paperwork and get it into the government so that the federation can approve it so that I can continue to take my medication while I’m playing.

“But everything was so slow and there were so many disconnects that it just did not work. It took me five months for me to get my medication approved. And in that five months, one little small spot that I had turned into the whole backside of my head. I was still hiding it and going about my life and still doing everything normally.

“It was just a mental drain on me, and I was thinking the whole time, ‘What if this shows during matches?’ I was getting so self conscious. I didn’t feel like me. I didn’t feel like a woman. That’s kind of like a stigma that’s created with hair, for a female.”

For McClendon, the stress wasn’t worth it.

“It’s a vicious cycle, right? It got to one point where I think it was New Year’s Eve and I was sitting down just thinking about myself, thinking about me. I was like, ‘What is hair even? What is this? It’s nothing. In the grand scheme of things it’s nothing.’ I thought about who I am as a person. I was like, ‘You know what? I’ve put myself in this little box of who I am, and that’s not me. If I cut all my hair off tomorrow, I’m still me. I’m still healthy. I still have a great family and a great support system.’”

So McClendon drew on that support system. What she heard made her impending decision all the easier.

This is who matters. Theirs are the only opinions that really matter. At that point it was set in my mind. I knew I was going to do it.
Deja McClendon,
Athletes Unlimited Volleyball

“After that, I realized these are some of the most important people in my life, and they support me. This is who matters. Theirs are the only opinions that really matter. At that point it was set in my mind. I knew I was going to do it. A lot of it had less to do with the alopecia and more with me wanting to be free from this box of expectations that I had put myself in and this idea of a beauty standard that we all kind of subscribe to a lot of the time without knowing it.”

In McClendon’s own mind, there was no doubt she had done the right thing.

“The moment I did it I was so free, and I just felt so happy,” she said. “And I felt like truly me for the first time. I’m very, very glad that I did that. I don’t have any regrets. I could have grown my hair back. I could have really kept going through that struggle, but I really just felt like that’s not who I am. That’s not who I want to be. That’s not the message I want to portray.

“From that moment, I felt like I could be so much more open about the struggle and could share that with other people and other girls, too, because I think if I struggled with it since I was 12, I knew there were probably other young girls out there struggling with the same thing.”

The reactions to McClendon’s decision to shave her head were overwhelmingly positive. But there were a few questions she had to field.

“The first reactions actually came from people on Instagram … I think a lot of people just assume immediately that you’re sick if you shave your head out of the blue. They’re like, ‘Are you OK? Do you have cancer? What are you going through?’

“And then there are people who thought I had a ‘Britney moment,’ where you have mental crises and you’re like, ‘OK, I’m just going to shave my head,’ like you didn’t think about it or didn’t plan it. So there’s that. Then you get the people who have immense support. They’re like, ‘Oh, my gosh, that’s amazing. You’re so bold. You’re so brave,’ and all of these other very positive reactions. All of them I can understand. I told people my story about it, and I was very thankful for all the support. But also, I realized it’s just about me. If I like it and I love it, then anybody else’s opinions don’t truly matter.”

Brazil brought more reaction when she headed to South America to continue her pro career.

“My teammates in Brazil in my next season were very, very supportive,” McClendon said. “They had never met me, so I don’t think it was a big shock for them to see me without hair. The fans were all very supportive of my hairstyle. I was the only bald player there so I think that was pretty cool.”

But there was more, a surprise encounter that McClendon said inspired her as much as she was inspiring someone else.

“This is one of my favorite moments,” she said. “In Brazil, there was a young girl named Giovanna Campos, and her dad messaged me on Instagram. I guess they had seen me play on TV. Giovanna has alopecia. She is 7 years old. Her dad messaged me and said, ‘We’re so happy to see you on TV. Giovanna has alopecia universalis, so she is completely bald, and it was so awesome for us to see you, and we hope to see you in person.’

“The season got canceled before I was able to play for her in person, but I messaged her back. I wanted to tell her that she was such an inspiration to me because she is just so beautiful and so open and so honest about her alopecia. She doesn’t hide it, and she’s so free with it at such a young age. I think that she was one of the reasons why I felt like I could also bring more to the table about speaking about alopecia and alopecia awareness.

“She was inspirational for me. She made me feel like there’s a bigger purpose in what I was doing. I was just playing volleyball. I wasn’t even thinking about my hair. That really woke me up a little bit.”

McClendon will have a chance to continue inspiring when the Athletes Unlimited volleyball season begins next February. Her immediate plan of action was to travel to Poland to be with and train with Niko, a physical therapist.

She said she was able to watch Athletes Unlimited’s softball season this past August and September and, like many others, is intrigued by the unique points-scoring system within games and the empowering of female professional athletes.

“I’m really, really excited to be part of Athletes Unlimited,” she said. “I think a lot of it was we had an opportunity to create something here in the United States because we don’t have any leagues here, and like most of the girls who are playing, have played several years overseas. So having this opportunity to play among our family and friends is just amazing.

“I think that the player-run aspect is also huge because anytime I’ve ever played professionally, there’s been a president and there’s been a whole club that has a lot of control over what you do, what you say, how everything is run. I think they miss out on a lot of things that matter more to the players. Having that ability to have somewhat control over that is really amazing.”