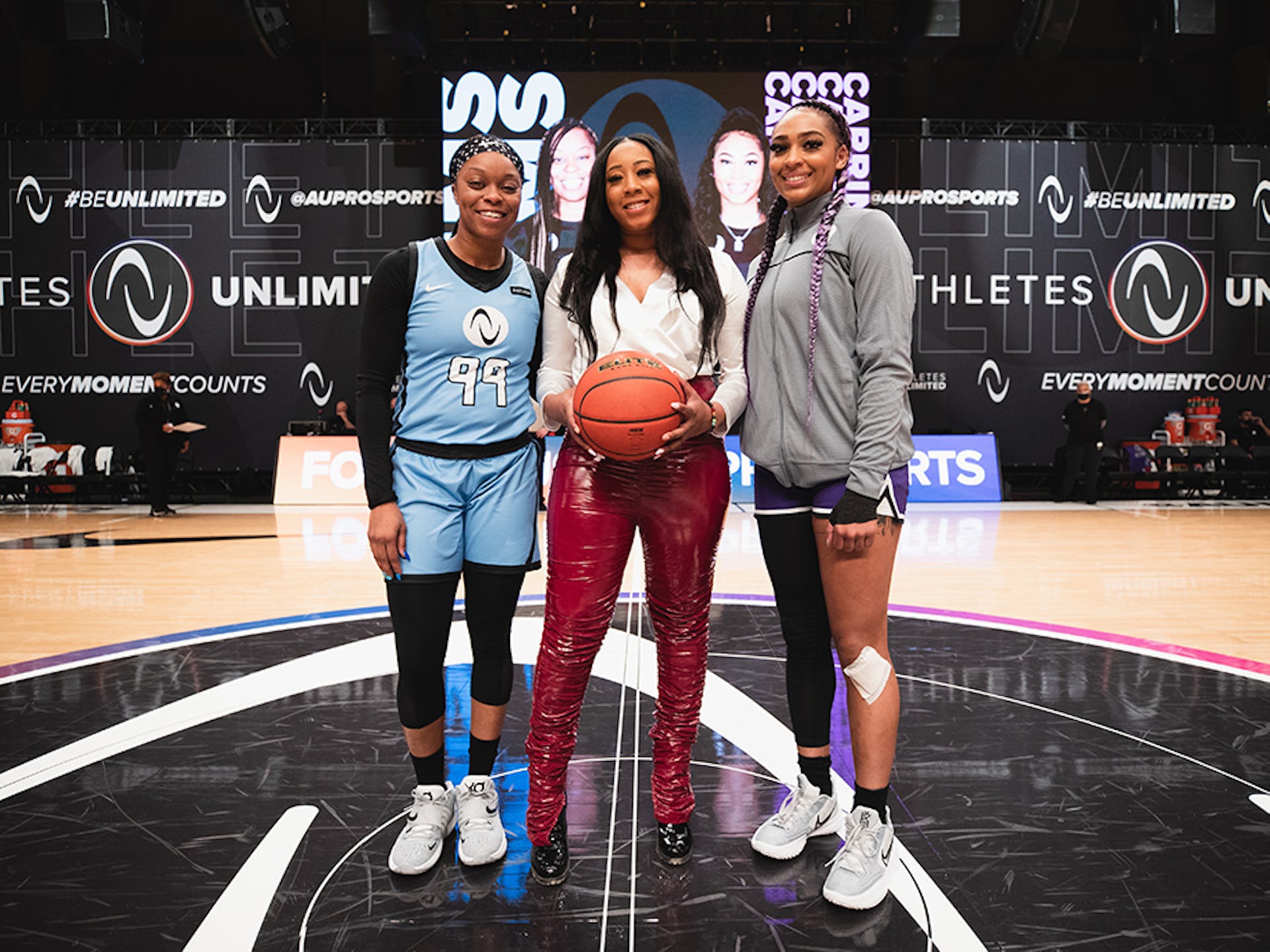 Girls Talk Sports TV Founder and WNBA Insider Khristina Williams will be answering questions each week in a weekly mailbag. How can you participate? Submit your questions weekly via Twitter.

Her overall growth is something to be recognized. Hawkins finished Week 1 in 15th place overall with 795 points, and is now entering Week 5 first place on the leaderboard with 5,425 points.

Why did Natasha Cloud pick the number 9? (@courtney_w_29 (Instagram))

According to Cloud, she selected the number nine in honor of her father, who she says always encouraged her to be on “Cloud 9.”

Which facilitator is on the winning side of AU Hoops (best record)? (@Reseepieces05 (Twitter))

Athletes Unlimited facilitator Danielle Viglione has the best record as a facilitator so far.

Here are the wins/losses through the first four weeks:

Viglione is a former University of Texas standout and Hall of Famer, who played for the WNBA (Sacramento Monarchs) for one season before embarking on a 10-year career playing overseas.

She is co-owner of the Sacramento Skills Academy, where she teaches the fundamentals of basketball through camps, clinics and private training.

Although on paper, she has the least experience on her resume in terms of professional coaching compared to her AU counterparts, her extensive knowledge of the game and trainer background has given her an advantage.

How do you think the presence of AU will help the WNBA? (@arsmithphd (Twitter))

The presence of Athletes Unlimited is already making an impact on the WNBA. Through the first four weeks we’ve witnessed players and facilitators sign with WNBA franchises. Also, fans now have a basketball league that is easily accessible during the off-season. While the majority of players in the W still play overseas, fans have said it’s hard to keep up with their favorite players due to time differences and lack of information. Athletes Unlimited, in my opinion, bridges the gap between the game and sports fandom year long. It’s keeping women’s basketball fans actively engaged each week. The scheduling/timing fits well because it ends at the start of March Madness and two months before the WNBA draft and training camp. The great thing about this league is it’s here to complement the WNBA and not compete.

Do you think Dijonai Carrington will win this year’s MVP award? (@2NiceSportsTalk (Twitter))

Athletes Unlimited doesn’t have an award for an MVP of the season, rather each game MVPs are selected from each team. MVPs from each game earn points that contribute to becoming the individual Champion. As of now, Tianna Hawkins is first on the leaderboard with 5,425 overall points and Carrington ranks fifth overall with 4,056 going into Week 5. At the moment I think the Championship will go to Hawkins or Cloud based on total points with only three games left in the season.

Carrington has moved up three spots in the overall rankings though, so I wouldn’t count her out of the top four just yet. In Week 4 she averaged 29.7 points (89 points in three games).

What player, in your opinion, has benefited the most from Athletes Unlimited? (@MikePatton82 (Twitter))

I believe that every player (1-44) has benefitted from their experience playing at Athletes Unlimited both on and off the court.

After speaking with some of the players, a lot of them told me they had different goals coming into AU. For some, this experience was about securing a WNBA contract and for others it was all about being able to play the game they loved.

The biggest winners though are definitely the fans!

Do you believe these second and third string WNBA players will get more respect this upcoming season with their high level play in AU (i.e. Dijonai)? (@AK_Hoops (Twitter))

Yes, I believe that Athletes Unlimited has given WNBA role players the opportunity to showcase their skills beyond what we’re used to seeing. Players like Dijonai Carrington, Lexie Brown and Tianna Hawkins are just a few players who have stood out during the last few weeks.

Tianna Hawkins opened up about her struggles with fitting into the Atlanta Dream system last season, which ultimately led to her being released from the franchise in free agency. Hawkins has used her time at AU to work on her shooting and develop in other areas, which has translated through her game play and is the reason why she’s currently the number one player overall on the leaderboard. She also recently signed with the Washington Mystics, a team where she helped win its first-ever championship in franchise history.

In my opinion, a player like Lexie Brown has also put the league on notice. Her leadership as a captain and player on the court is a testament to the work she has put in to become better. I know she hasn’t officially signed the qualifying offer extended by the Chicago Sky yet, but perhaps her success at AU will get her offers from other WNBA teams where she can fully step into a bigger role.

Carrington has proven herself to be a certified star. She has put on consistent numbers every night. I wouldn’t be surprised if Connecticut Sun head coach and general manager Curt Miller expands her role in the 2022 season.

Wow, no breakfast in bed, guess I didn’t just hit A HALF COURT GAME WINNER IN OVERTIME! Idk w.e, kinda over this team pic.twitter.com/f65SfM27au

I have some skit ideas to execute. I’ll be hosting auditions soon to see if any of the players at @AUProSports have what it takes to take part!

Craziest thing I’ve seen in the @AUProSports draft so far is @OMG_itsizzyb not picking me when I’m dog sitting Prince! Nooot smart pic.twitter.com/cNR2alARNe