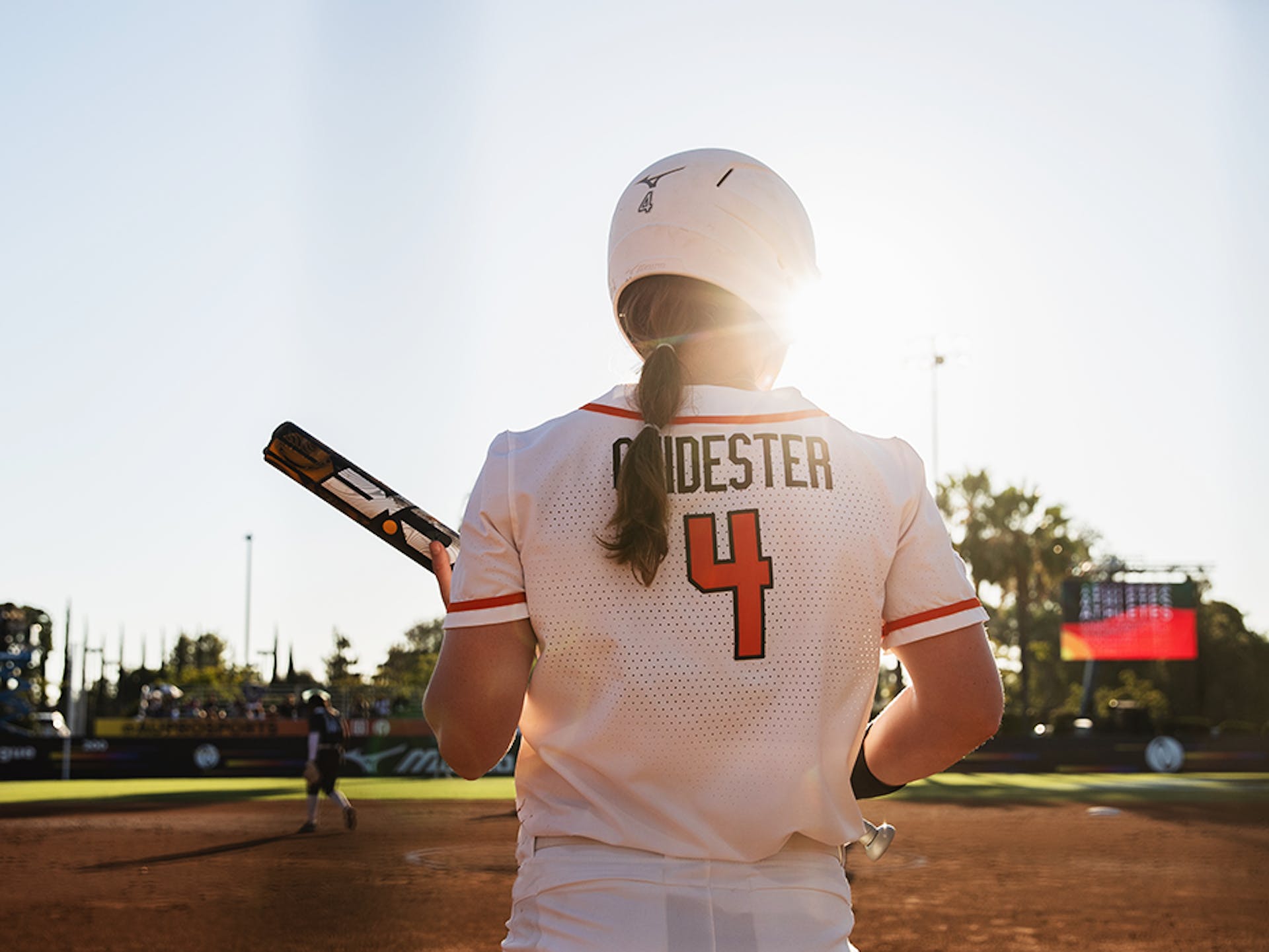 Amanda Chidester forever will be an Athletes Unlimited history maker.

Two years ago, on the eve of Season 1 of AU softball, Chidester became the first No. 1 draft pick in the organization’s history.

Chidester has gone on to become one of the most productive, exciting and vocal players in AU. The power-hitting corner infielder (seven home runs to lead AU in 2021) will serve as the captain of Team Orange for Week 1 of the 2022 season after her second-place finish on last year’s leaderboard.

This year will be Chidester’s swan song, as she plans to retire as a softball player at season’s end after a career that has included starring at the University of Michigan, being a medalist for Team USA in the Olympics and playing professionally.

“I’m getting older,” the 32-year-old Chidester said. “I feel I’ve done everything I wanted to do in the sport. I’ve started a new venture with HitTrax where I’ve been working to create an app called RISR, and it’s been a lot of fun. It’s been taking a lot of my time. It just feels like a great transition, a great time. That drive in me is not quite there, and I want to make sure that I end it with giving the sport everything that I’ve given in the past and that it has given me. It just seems like it’s a fitting moment for me.”

A two-time NFCA All-America selection and two-time Big Ten Player of the Year at Michigan, Chidester (known to one and all as “Chiddy”) played professionally with the Chicago Bandits and the Scrap Yard Dogs while also playing for Team USA. She and her teammates won a silver medal at the 2020 Olympics, held last year in Tokyo. She also is a five-time medalist in the World Cup of Softball.

When AU came along two years ago, it was a perfect fit for her.

“It’s been awesome; it’s given more opportunity to play,” she said. “Any chance we can play and compete at the highest level is so rewarding, so amazing. It’s huge for the sport. It’s huge for us. All of us at the professional level just love competing. We’ve been tossed around here and there, and I feel Athletes Unlimited has been something secure for us the last three years, and that’s special. I’m forever grateful for that.

“Everything that Athletes Unlimited represents is really player driven and player focused. It’s pretty awesome, and it’s going to be huge for women to be able to stay in the game as long as they’d like.”

Chidester had no doubts the new venture would take off because of its core principles and how they were put into practice.

“From the beginning, you could tell that everything was done at the highest professional level,” she said. “They treated us like professionals right from the start. It was, ‘Wow, they’re really serious about this and they really want to take this and run with it.’ So no, I didn’t have doubts because after that first year and how they made it work during COVID. It’s like, ‘They’re serious. They want to do this.’ And they really showed that they could, and they continue to do it.”

How Chidester became the first overall No. 1 pick is one of those stories that can be summed up in four words: only in Athletes Unlimited. After preseason scrimmages before Season 1, pitcher Haylie Wagner earned enough individual and team points to be named captain of Team Gold, assuring her of the first pick of the weekly draft.

Wagner, a left-handed pitcher, was a teammate of Chidester’s for one year at Michigan. She used that first pick to take her onetime college mate. On draft day, Chidester responded playfully when asked if there was any Wolverine bias in the selection.

“I don’t know,” she said. “You’ll have to ask Haylie that question.”

Two years later, Wagner said there was much more to the selection than the Michigan sisterhood.

“It’s really awesome to have that opportunity and that experience and for her to trust me and for me to trust her and be able to draft those people that you’re confident with and you trust on and off the field,” she said. “It was Amanda Chidester because I knew I wanted her on my team. I wanted her to make a difference. I wanted her. I trusted her. I knew what she could bring to the table. And I knew she was going to give us that energy that we need on the field.” In fact, Wagner says Chidester made an impression on her when she arrived at Michigan as a freshman and Chidester was a senior. The impact remains to this day.

“I was a very quiet, shy kid my freshman year,” Wagner said. “And she was this very bubbly, outgoing person. At first, it was very like, ‘Oh, my gosh.’ But she has such energy about her that I remember sitting there – and I’ve told her this; she knows this – my freshman year and we were voting on captains. She ended up being one of our captains. I wrote ‘Amanda Chidester’ on it. I was like, ‘Wow, I want to be her friend one day. Whether we continue on and talk after college or not, I want her to be one of my friends for the rest of my life.’ I am lucky enough to have that.

“She is the energetic, loving, happy, amazing personality, competitive person on and off the field. She just drives you to be better. She’s only gotten better with that every single year. She helped me go from that quiet, shy freshman player to this confident, outgoing and competitive pitcher on the field.”

Fans coming out to the Parkway Bank Sports Complex in Rosemont will be able to hear Chidester above the crowd noise as she encourages and cajoles teammates while enjoying the game of softball. She gladly pleads guilty to being a vocal presence on the field.

“That’s definitely me,” she said. “It’s always been me. I’m passionate about the game. I love playing the game. I love cheering on my teammates. The little kid in me comes out when I get on the field. I love the energy. I just love bringing the energy for my teammates. I feel that’s a big role for me. I think that I’m good at it. And I like bringing that to the table every game.”

Spectators also should get a kick out of Chidester’s walk-up music: “Chitty Chitty Bang Bang.” Naturally.

“My nickname is ‘Chiddy,’ and it was at Michigan where I decided to do that,” she said. “The fans loved it. So I was like, ‘I’m just going to keep it.’”

As her career winds down, Chidester can walk away knowing that she enjoyed her own “only in Athletes Unlimited” moment last year when she was able to draft her fiancée, Anissa Urtez, with a first-round pick. There were plenty of good softball reasons for that pick. Urtez was the GEICO Defensive Player of the Year, and she batted .327 with one home run and 15 RBI.

“Being able to draft Anissa, we’ve always played against each other, never really played with each other,” Chidester said. “I’m biased. She’s the best shortstop. I definitely want her on my team especially when she has that hot bat. It’s fun to play together. We always train together. It’s nice to bring it to the game, as well.” Although there are games left to play, Chidester says she will stop and take things in as she completes her professional softball career.