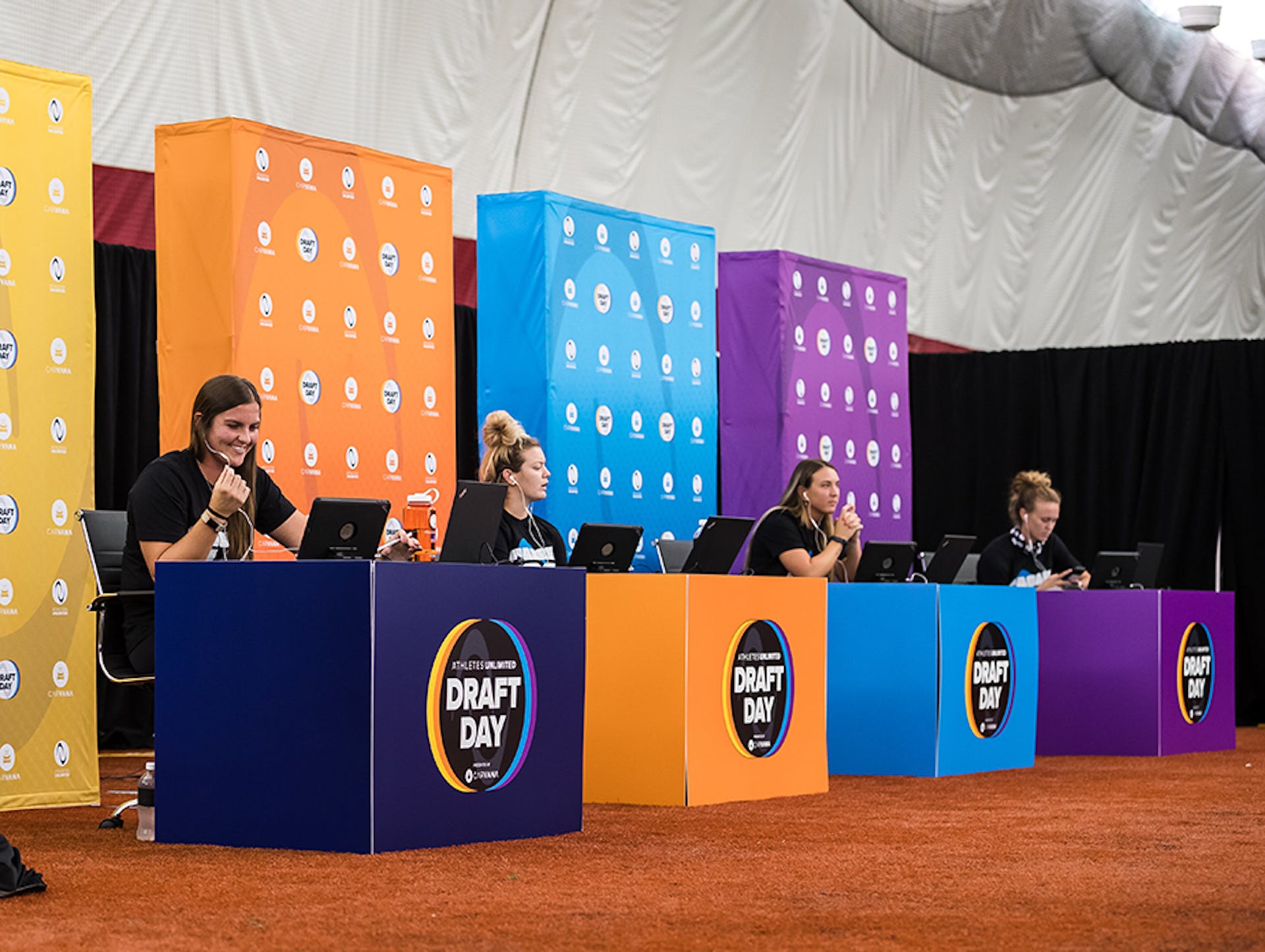 She also will have a historical legacy.

Chidester was selected as the No. 1 overall pick in the inaugural softball player draft in Athletes Unlimited, a league that has placed power in the hands of the players. Reflecting that, all of the 52 picks were made by players who earned the right to be team captains by virtue of their performance in this week’s scrimmages in Rosemont, Illinois.

“It’s cool,” Chidester said. “It’s been a great experience so far. I’m just excited to be a part of all this, whether I was the first pick or the last pick We’re all there playing and we’re all there competing, which is amazing right now. I love playing this sport.”

Chidester is a catcher who played her college ball at the University of Michigan. She was taken by Team Gold captain Haylie Wagner, who topped all players in the scrimmages with 356 points, based on individual and team performance.

Chidester said she wasn’t totally surprised to be taken No. 1. She was playfully coy about whether being a Michigan product along with Wagner had anything to do with that.

“I don’t know; you’ll have to ask Haylie that question,” she said with a laugh. “She had picked me with the first pick in the mock draft. She’s a pitcher, and if you’re a pitcher, you’re going to want to pick a catcher, or you have a little more room to choose what you want. If you’re a fielder, you’re going to want to go with a pitcher first because you need pitchers. I guess there are all different strategies.”

The other three first-round picks were pitchers. Team Orange captain Jessie Warren selected legendary lefty Cat Osterman. Another lefty, Taylor McQuillin, went third to Team Blue, captained by Nicole Pendley. Osterman and McQuillin faced off against each other in Tuesday’s scrimmage finale, and both pitched well.

Left-handed pitcher Danielle O’Toole was the final pick of the first round, taken by Team Purple captain Sami Fagan.

The Athletes Unlimited season kicks off Saturday at Parkway Bank Sports Complex with a doubleheader to be televised by ESPN2. The first game begins at 1 p.m. ET (12 p.m. CT), and the second game follows at 4 p.m. ET (3 p.m. CT).

The first round of games will continue with doubleheaders Sunday and Monday. Followed by the draft for Week 2 next Tuesday, where four new captains based on performance will draft teams for the following week of play.

Each captains is given two minutes to make each pick as rosters need to be filled with three pitchers, two catchers, four infielders (two corner infielders and two middle infielders), three outfielders and two “unlimited” players, which can be any position. Once play begins, however, captains may use players as they see fit. “I’m excited,” Wagner told Athletes Unlimited Softball senior director Cheri Kempf during a break in the draft proceedings. “I think we have a great team. I’m really excited about the defense and the offense that we have. As a pitcher, being able to have the defense back there is really important ñ and having a good lineup.”

Wagner said that as a captain, she indeed would allow Show to do one of her famous bat flips when she hits.

“Absolutely, yes,” she said, smiling. “I give my team the ability to do what they want.”

“I feel good about my picks,” Warren said. “We have a lot of speed in our lineup. I think it’s going to be fun.”

Warren noted the weight of being a captain responsible for the draft, with a little help from teammates in their “Zoom room,” where players can strategize with their facilitator and already selected members of their team.

“Honestly, I just wanted to play,” she said. “I wasn’t focused on becoming a person who was drafting. I just love the game of softball and just wanted to come out here and play and have fun with the game. It just so happened that I did well and my teams got the wins and played team ball. It’s pretty cool being able to sit here and do this and get the girls on the Zoom and combine minds about who we want to pick and have some strategy behind it. I’ve been having so much fun since I’ve been here.”

If there was any “drama” to this draft, it was if and when Team Blue captain Nicole Pendley would take her sister, Shelby. Nicole did just that with her third pick after she took McQuillin and catcher Sashel Palacios.

Nicole gave a good-natured jab to her sister during the live interview.

“Why it took so long to take my sister? Well, she wasn’t the most valuable person I needed,” she said. “I literally cannot get away from her. I go home from Christmas, she’s there. I go home for Thanksgiving, she’s there. I come to play softball, she’s there. I’m just kidding. I’m excited. We make each other better. We complement each other in different ways. We’re very different. We balance each other out. I’m curious to see how it all works out.”

Team Purple captain Fagan hit a home run in the first game of Tuesday’s doubleheader. That was good for 40 individual points. The previous day, she had a pair of singles. So it wasn’t a total surprise that she went big time for offense after taking pitcher O’Toole with her first pick. Fagan went with catcher Taylor Edwards second, infielder Nerissa Myers third and outfielder Haylie McCleney fourth. McCleney homered during the scrimmages.

Here are each team’s full rosters.