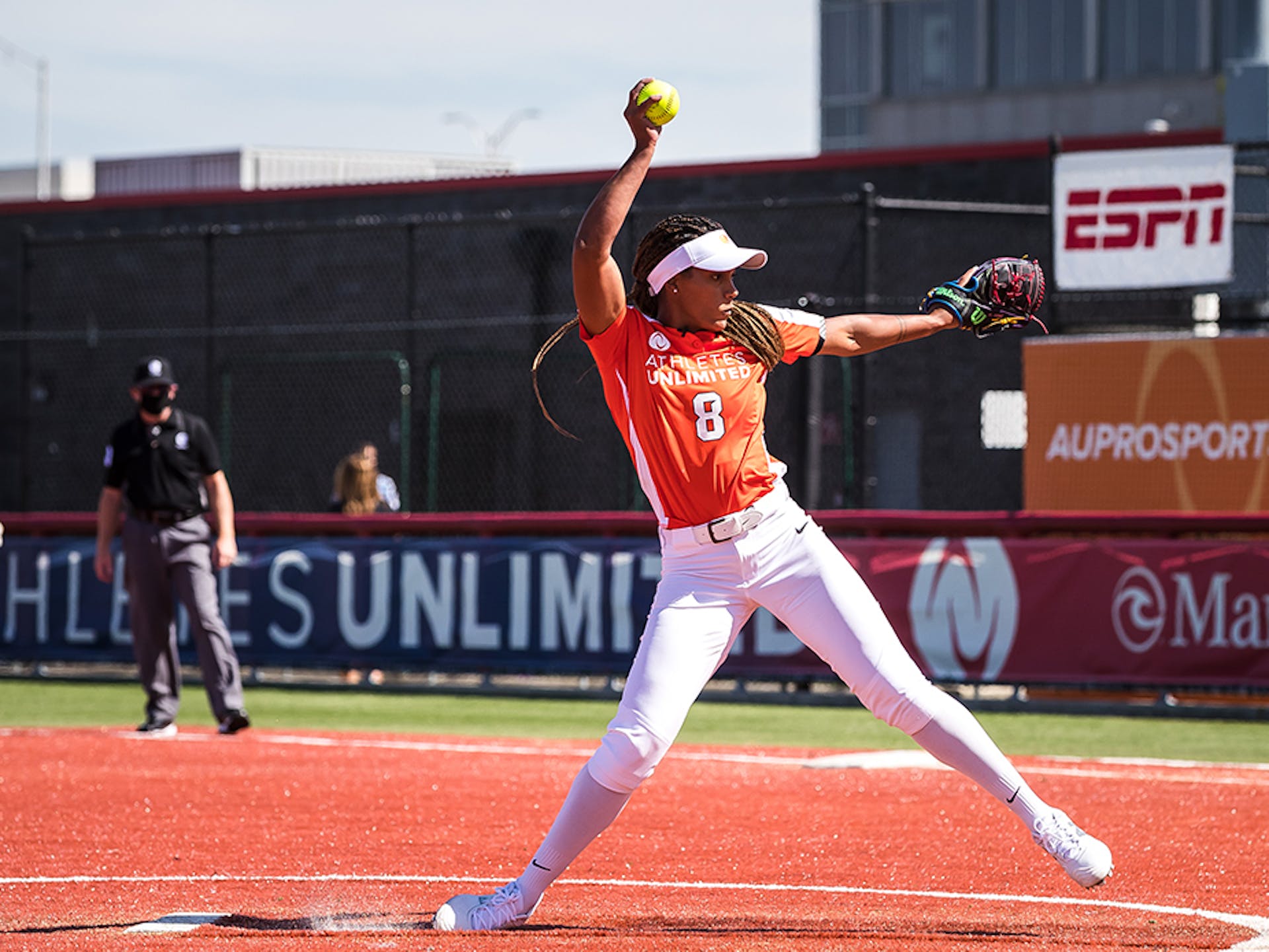 OCASIO PITCHES A GEM TO TOP LEADERBOARD IN 10-2 WIN

The winning teams have been doubling their pleasure so far this weekend.

In each of the first two games of Athletes Unlimited softball in Rosemont, the winning team has scored in double figures each game.

That was the case again on another sun-kissed day at Parkway Bank Sports Complex.

The Orange team captained by Jessie Warren jumped on Nicole Pendley’s Blue team for two runs in the first inning and four more in the second on their way to a 10-2 victory. Team Warren is 2-0, having beaten Team Fagan 11-3 in Saturday’s season opener.

Gwen Svekis hit a three-run homer in the second inning, a big drive to right-center field. She also hit a sacrifice fly in the first to earn 50 individual points; she has a total of 280 for the two games played.

Catcher Erika Piancastelli, who did not start Saturday, made her presence felt with a first-inning walk, an RBI single in the fifth and a booming home run off the right-center field scoreboard in the sixth. She earned 60 individual points, 20 for being the MVP 3 choice and 110 for the game. She has 310 across two days of play.

With all of that offense, let’s not forget about the gem of a pitching performance by Aleshia Ocasio. The right-hander worked six innings, giving up six hits and two earned runs. She earned 72 points for the 18 outs she recorded minus 20 for the runs she allowed – 52 points. She was voted MVP 1, earning 60 points for that, giving her 222 for the game and 344 total, leading all players heading into Sunday’s second game.
The most impressive thing about Ocasio was that she changed speeds masterfully on her pitches, keeping hitters off-balance all day. She chalked it up to a super-charged battery with Piancastelli.

“She never caught me that much before, so our game plan was to mix, as always, to mix,” Ocasio said. “She called a great game behind the plate. I had three strikeouts so I owe it to the team to be able to be masterful. I thought we made some good plays. I owe it to them.”

Team Warren got things done every which way on offense. Center fielder Victoria Hayward set the tone off the bat by punching one past the third baseman in into left field for a single.

“I was just working the left side of the field to get on for our team,” said Hayward, who has piled up 330 points. “We’ve got a lot of speed. So any way I can get on base, I’m not being too picky.”

Team Pendley got a run back in the third, but Team Warren put it away for good with a run in the fourth, two in the fifth and one in the sixth, on Piancastelli’s big blast.

Did she think it would hit the scoreboard?

“I thought I made good contact, so I was hoping it would.”

Despite not starting Saturday, Piancastelli was ready for Sunday.

I felt really good,” she said. “I feel really comfortable with this team. Overall great vibes and a fun game.”
A native of Modena, Italy, Piancastelli said her folks at home were watching.

“Absolutely, they’re all watching,” she said. “They were all super excited when it was made available for them in the country. They’re watching it. They’re all taking it in. I’m super excited to have them watch and understand how this new league works and give them hope they can play out here, too.”

For Team Pendley, Caleigh Clifton picked up a single and a double, giving her 30 points plus 10 win points for the team winning the third inning.